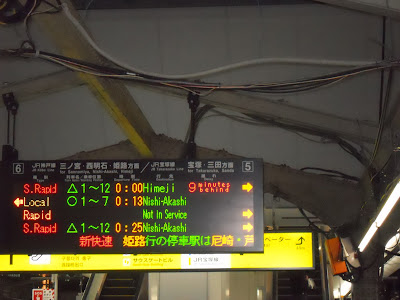 If you are going to cross the length and breadth of a country using only local trains in continuous twenty-hour stretches, it might be much to your appreciation when those trains actually work. That was perhaps why it was so feasible to explore Japan in that manner these last two weeks: with only minor exceptions, as above, every train arrived and departed at exactly the moment it was scheduled to. All the legends are true.
The legends do have omissions. One most readily notices the tendency for trains to have the heating turned up to temperatures comparable with the outer layers of the sun, even when it is not actually cold outside; this too may render the air less than breathable. But in honesty, after a decade and a half enduring the horrors of the British equivalents, traversing Japan like this was a luxury by comparison. 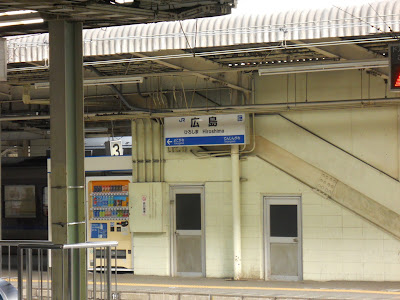 My travelling companion and I embarked from Tokyo on Christmas Day, and arrived the following morning in Hiroshima. Over the coming weeks I will post some impressions from the journey, beginning with the "City of Peace" renowned for its subjection to one of the least peaceful moments in the history of our kind; then progressing to monkeys and New Year celebrations in the snows of Nagano, and finally the heritage and stunning natural beauty of Nikko. Click the expander below for how it began.
At the outset, however, there is unfortunately one condemnation I must express concerning our treatment in the city of Himeji, forever to bear record in the annals as the place where, on a freezing Christmas night, when we sought nothing more than warmth and seating, neither came forth. It was at 1-5am on 26 December, as we waited for the train station to re-open, that we were mortified to discover that nowhere was open to shelter sleepless, luggage-laden travellers off the windswept streets; what few lights were on harboured only contemptuous proprietors, refusing even to answer questions on where we might head to not freeze to death. But least satisfactory of all was what awaited us in the only potential harbourage we at last staggered into, the twenty-four-hour Matsuya eatery, where the senior staffer saw fit to rudely usher us from our table on the pretext of a one-hour customer presence limit: this when our exhaustion and baggage were fully evident, so too the sub-zero temperatures outside, and the soups we had paid for not yet consumed. Have I yet mentioned that this was the night of Christmas?
Such inhospitality is a challenge to imagine possible, and though we at last endured and were able to journey onward, it is to my disappointment that this ordeal, though rather humourous in hindsight, must take form as my abiding memory of Himeji, a city which I am sure would prefer to be known for kinder and more illustrious qualities than it deigned to offer us on Christmas 2011. 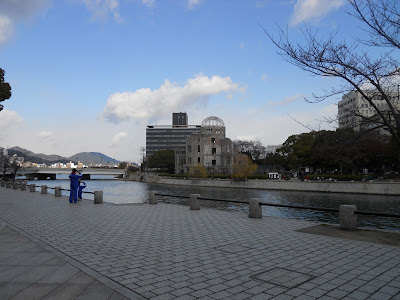 Arrival in Hiroshima brought much relief. In the morning light we approached through the Chugoku region, the western extent of the main island of Honshu. From a train window it is the perfect Arcadian postcard of rural Japan, the hills and hamlets of many a Studio Ghibli landscape of expansive forests and verdant slopes. The houses in these villages bear traditional roofs and architecture, and nestle in sunlit valleys beside the cool blue waters of the Seto Inland Sea – all of which appear in your field of view at once, in harmonious balance. Doubtless they hide their own tales of struggle, perhaps of ageing populations and migrating youth and declining Satoyamas; but they are certainly a long way from Tokyo.
With an afternoon to make use of on thirty hours without sleep, we opted for a relaxing walk through the city to the Shukkeien ("shrunken-scenery") Garden, cultivated to represent different landscapes and natural formations at miniature scale. 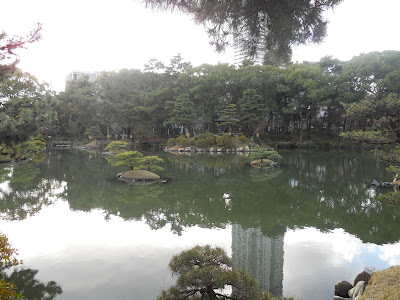 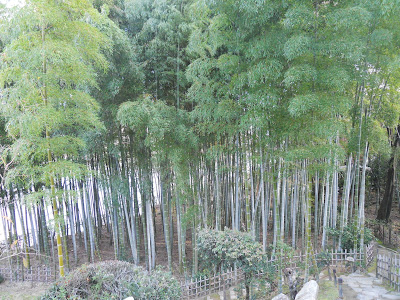 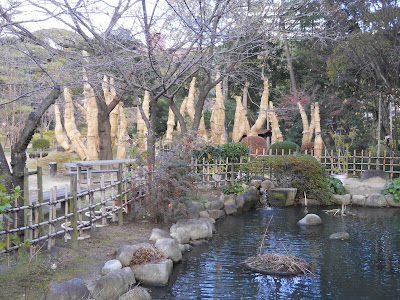 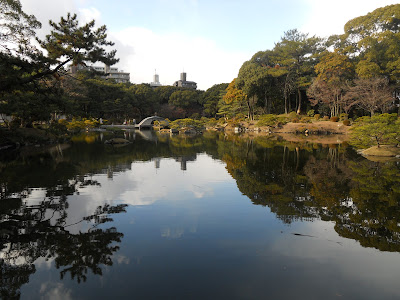 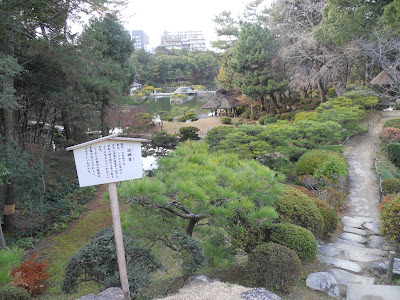 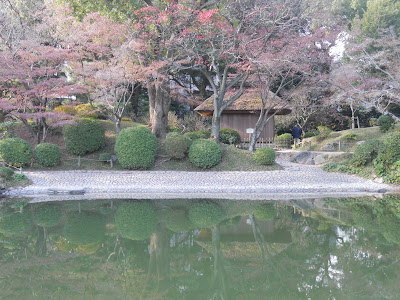 And then there's these fellows, who are most definitely not miniature. 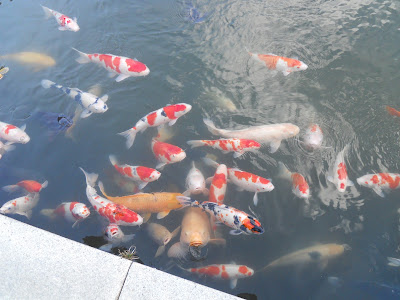 The Shukkeien Garden lake is home to more koi carp than I have ever seen agglomerated into a single space, and they are colossal. I've seriously come across sharks smaller than the most corupulent of these considerable comrades; and for 100 yen you can buy them some feed and watch them clamber left and right on the backs of their brethren to get at it. 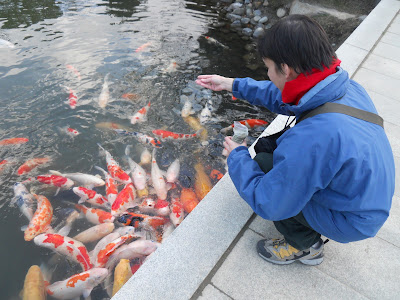 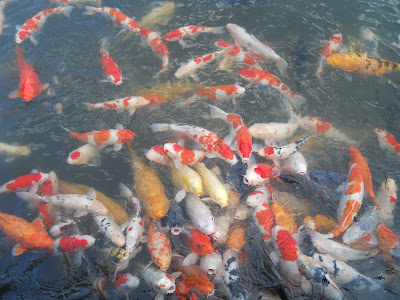 Coming up: Miyajima, site of the Itsukushima Shrine and the famous "floating" torii (gate); and of course, the legacy of the more unenviable reasons for this city's fame.
Posted by Chaobang at 09:22