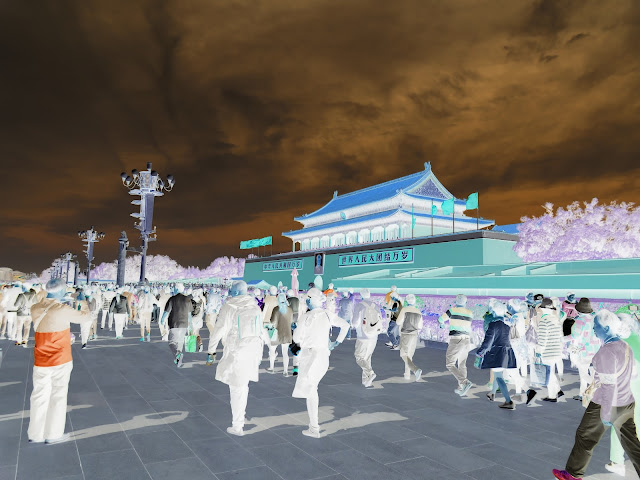 Remember the students, workers, intellectuals and citizens slaughtered not only in Tiananmen Square, but in the homes and streets of Beijing and other Chinese cities on that night of carnage, and in the hunts of the years that followed.

Remember not only those unnumbered casualties, but those still to follow. The future of humankind was murdered that night.

Consider. The story of human modernity has been written in white-supremacist horror. European conquerors and colonisers raised a vision of the human future rooted in unspeakable violence: the violence of genocide, slavery, human disposability, relentless and systemic otherisation, exploitation and abuse of power at all levels of society, and neverending cycles of conflict between and within populations soaked in trauma, and at last, the plunder of the planet itself to breaking point.

That corrupt modernity is now dragged to its reckoning. First to rise to global power from beyond it have been the Chinese.

The People’s Republic of China had the first true chance to challenge that order at a comprehensive level. The opportunity, and responsibility, were huge: to offer the world a real alternative to the cruelty of white modernity. A better vision. A better conception of power than that the Chinese themselves knew so well for the century of torments it visited upon them.

Instead, it is now beyond doubt that they have chosen merely to emulate it in their own image.

To look on the behaviour of the China of Xi Jinping – the Uyghur genocide, the thoroughly colonial repression of Hong Kong, the totalitarian surveillance, the erasure of crimes like the Tiananmen massacre from historical memory, the hypocrisy, platitudes and relentless butchery of the truth by organised trolls and “wolf warrior” diplomats – is to see them doing exactly the same thing all over again. Unleashing it on the world once more – only now in a time of interconnected global peril when the stakes could not be higher.

Was the 1989 massacre the threshold, the signal, the event horizon?

It took generations for the Chinese to emerge from a hundred years of horrific pain: colonial humiliation, total war, revolutionary upheaval. The catastrophic atrocities of the Maoist period can arguably be seen as the spasms and meltdowns of an utterly traumatised society. 1989 was different. It was the conscious choice of a leadership which claimed to be steering their country out of post-revolutionary turmoil. To be re-entering the world as they set about building a stable, confident and respectable Chinese future.

And at the crossroads of 4th June 1989, they baptised that future in blood.

After the initial shock, the rest of the world decided it was okay with it. And so the endless nightmare of the white supremacy is set to play out again in a new format. Further centuries of the same abuse of dissidents and people seen as different, the same contempts, the same authoritarian bloodthirst, the same towers of lies dressed up as timeless truths, the same mountains of corpses, nameless, forgotten  – all of it, all over again. They, too, in their millions, will be victims of the choices taken on 4th June 1989.

Remember Tiananmen. We are all stood in it now.