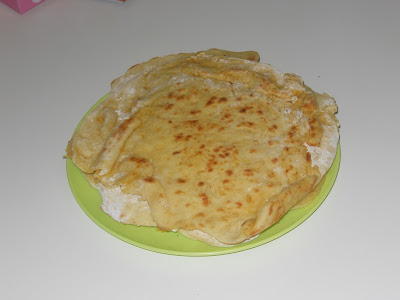 Everyone has strengths and weaknesses. For me, cooking is not typically of the former.
Nonetheless, this day I committed to an exercise in globalization, creating one of my favourite items from Guyana using Japanese ingredients and equipment. 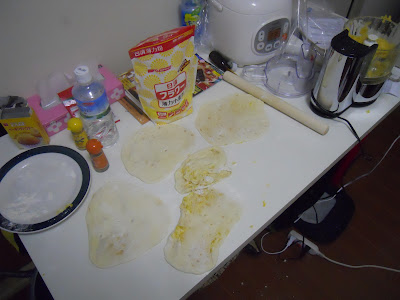 Dhalpuri is unleavened Caribbean roti (of South Asian origin), with a stuffing of ground yellow split peas along with cumin, pepper and garlic. Lacking a mill and tava, I sufficed with a food processor and a frying pan over a stove. It raises interesting reflections on the geography of cuisine: crowded and compartmentalized Tokyo leaves little room for the great communal cooking devices found in the kitchens and yards of Guyana's houses - the cassava processing apparatus of interior households alone would occupy more space than the average inhabitant of Tokyo lives in. Conversely, the tiny microwaves or toaster ovens here might quite amuse a Guyanese!
The process took two hours and made one heck of a mess, but from the outcome rose the taste of some of the most impressive memories I hold. 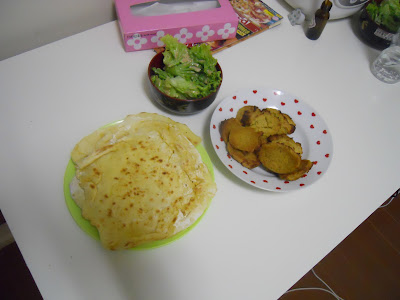 With my most honoured friend in Tokyo, I toasted Guyana over this product and dedicated this meal to my students at the Bina Hill Institute in the summer of 2010. May success, good fortune and the best of fulfilments be currently finding the journeys of each and every one of you.
Posted by Chaobang at 12:38 0 comments

Conflict and Peacebuilding in East Timor

For those interested in the kinds of things I have been doing at the UN University... 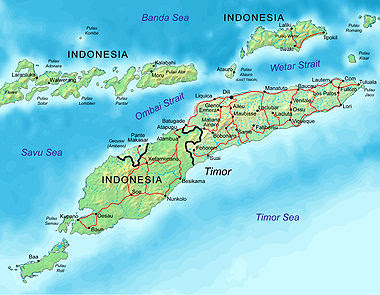 
Introduction
In December 1975, the world turned its back on East Timor. Twenty-four-years of Indonesian occupation visited brutality of demonic proportions upon its people: one of the worst genocides of the late twentieth century, in which over two hundred thousand Timorese, a third of the population, were killed.1 It was answered, extremely belatedly, with the largest, furthest reaching and most committed international response in the history of United Nations (UN) peacebuilding.


The UN is now thirteen years into its intervention in East Timor, or in what, to the intervention's credit, became in 2002 the independent state of Timor-Leste. However, despite considerable success against astonishing odds, peacebuilding in East Timor has not been an unmitigated success. Today the outlook for Timor-Leste remains uncertain, its stability and prospects still appearing to hinge on the continued UN presence.


This analysis has two parts. In the first I explore the background to the East Timor conflict, in search of the causes of its traumatic violence in both the original conflict and the persisting unrest which still brings strife to its pursuit of peace. In the second I consider the UN peacebuilding exercise in depth, and ask whether it has sufficiently taken those roots of conflict into account. Through this I advance that the experience in East Timor offers lessons by which the UN might improve its peacebuilding exercises in future; but that the obstacles have been less due to faults in the UN organization, and more the responsibility of its member states and the international paradigm they yet uphold. For indeed, it was this paradigm, of states which choose to act on the world only in terms of their own "national interest" calculations, and which struggle to see through value frameworks other than their own, that was ultimately responsible for East Timor's nightmares; and this choice of paradigm which, although the UN's foundational principles reject it, made East Timor all the more challenging to raise from the wreckage to which the very same choices reduced it.
(Click below for the rest of the paper.)

CLICK HERE FOR FULL ARTICLE
Posted by Chaobang at 04:25 0 comments