Mitō-san (三頭山, 1525m), the highest of the 'Three Mountains of Oku-Tama' in western Tokyo, is trickier to reach than the others. For one thing it is scarcely in Oku-Tama at all; it stands in the far southwest corner, on the boundary with Hinohara village and Yamanashi Prefecture. On the other hand, if you go there on a day with nice weather, you can get to see things like this. 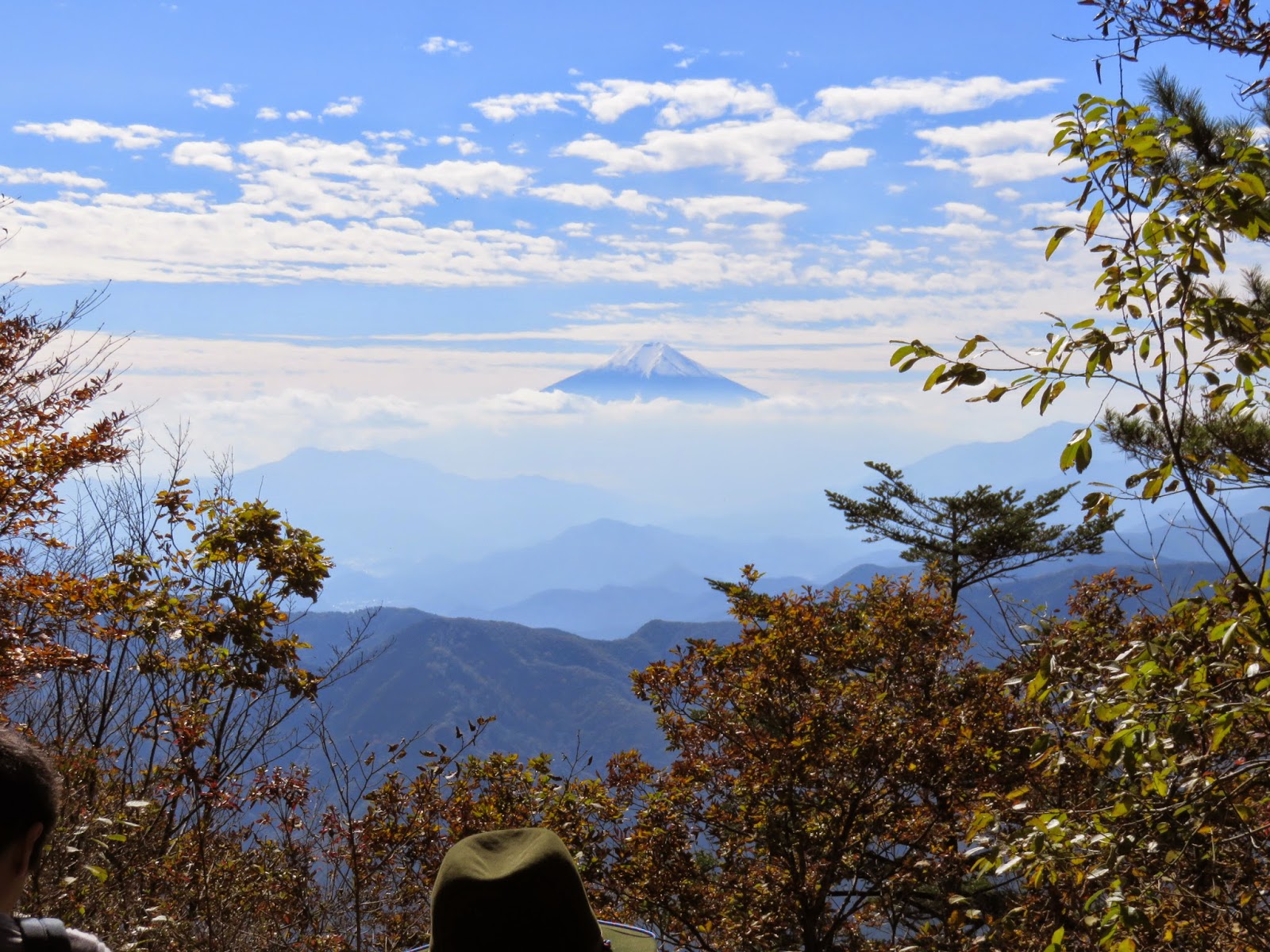 Mitō-san – so named because of its clump of three summits – was apparently closed off to people in the Edo Period. This left it in peace to grow a splendid forest of huge beeches (buna, ブナ) and maples (kaede, カエデ), which still stand despite the dominance of sugi plantations in the area and display impressive colours in the autumn. This rich mixed forest also supports a thriving diversity of plant and bird life. 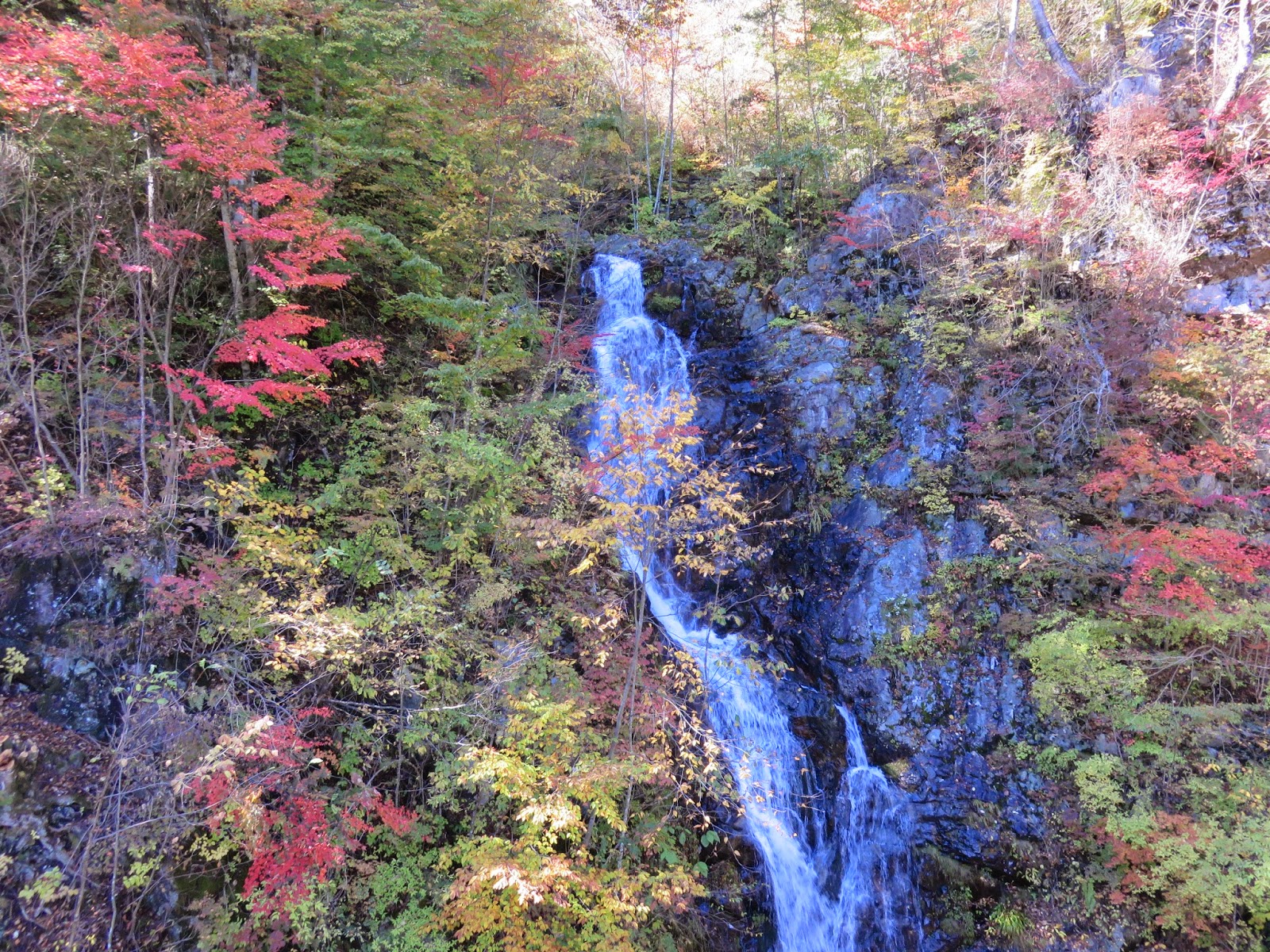 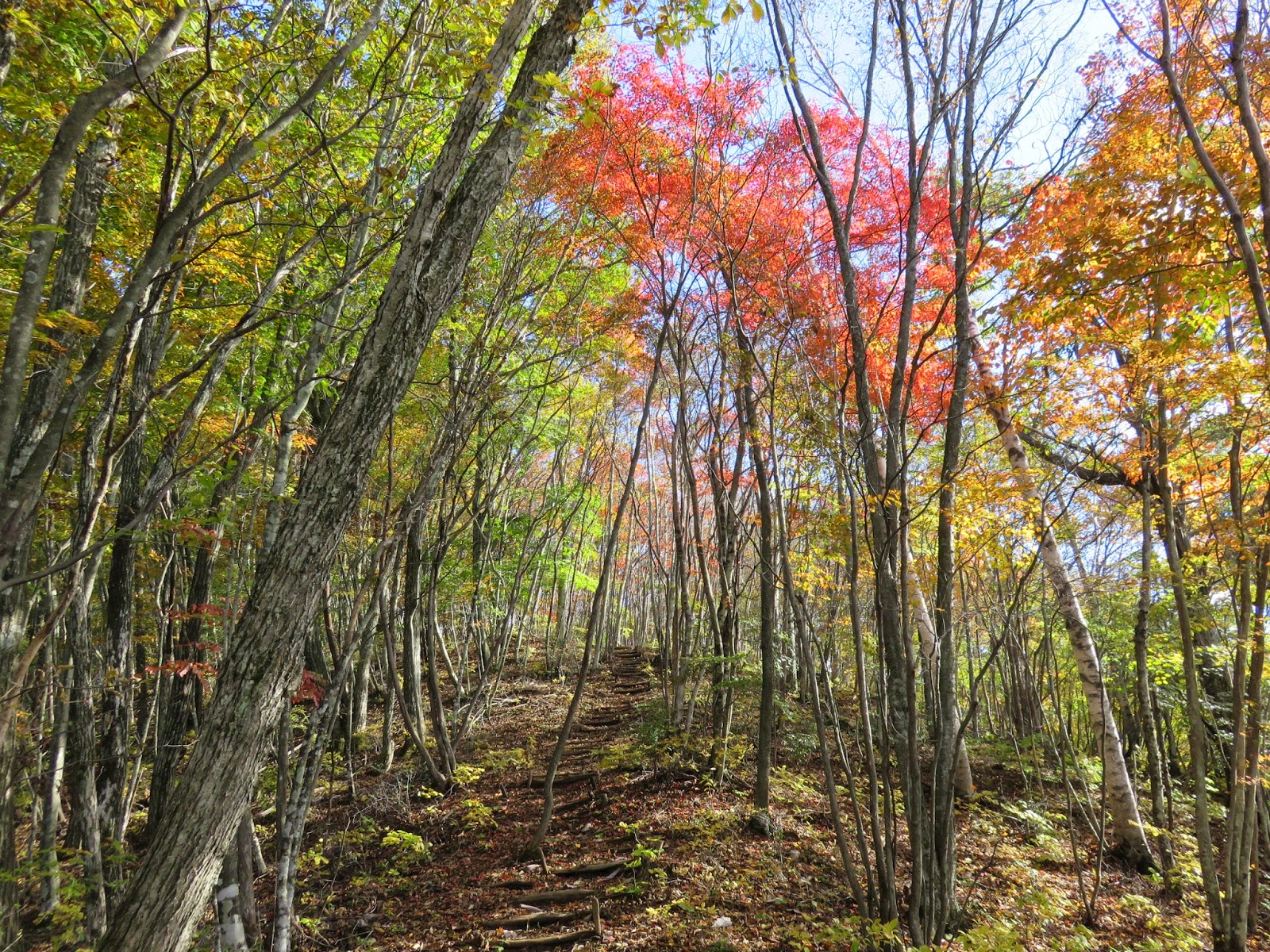 In a reversal of its former status, Mitō-san is now the centrepiece of the Hinohara Citizens' Forest (tomin no mori, 都民の森). The mountain and its surroundings are now open to everyone, with a well-equipped and well-maintained network of hiking trails and facilities which attract large numbers of people, although its relative remoteness stops it from getting overcrowded or detracting too much from immersion in nature.

There are multiple hiking routes to choose from, and they are generally quite easy – occasionally steep, but never punishingly so. This is definitely a mountain suitable for beginners, with a lot of cabins and information boards making it easy to navigate, rest or find support if needed. For more advanced walkers, longer routes out of the Citizens' Forest are also an option – you can go down to Oku-Tama Lake, or even up to Gozenyama if you are feeling ambitious enough.


The biggest challenge lies in getting there. Hinohara, the last part of Tokyo still designated as a village (mura, 村), is a sleepy place, whose mountain and forest coverage far exceeds its rail coverage. Unless you have a car, take the Itsukaichi Line (which branches off the Ōme Line) from Tachikawa to Musashi-Itsukaichi Station (武蔵五日市駅). From there, ride the Nishi Tokyo Bus (2014-5 timetable here) to tomin no mori (都民の森), although it may only run to Kazuma (数馬) where another bus will be waiting to take you the rest of the way. That's about 1 hour 10 minutes and 910 yen one-way, incidentally.

CLICK HERE FOR FULL ARTICLE
Posted by Chaobang at 04:21 0 comments

Aizu (会津) - The Other Fukushima 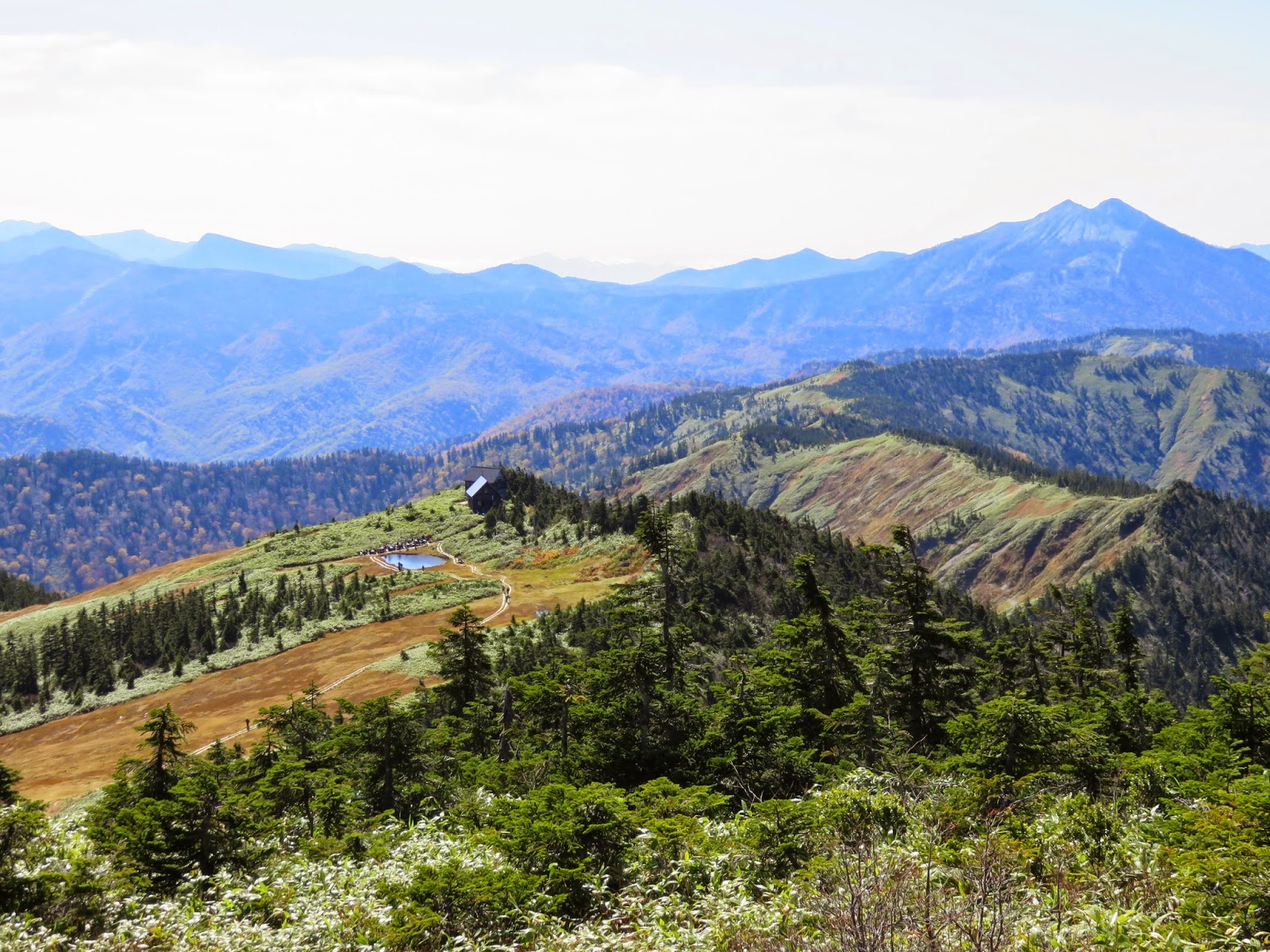 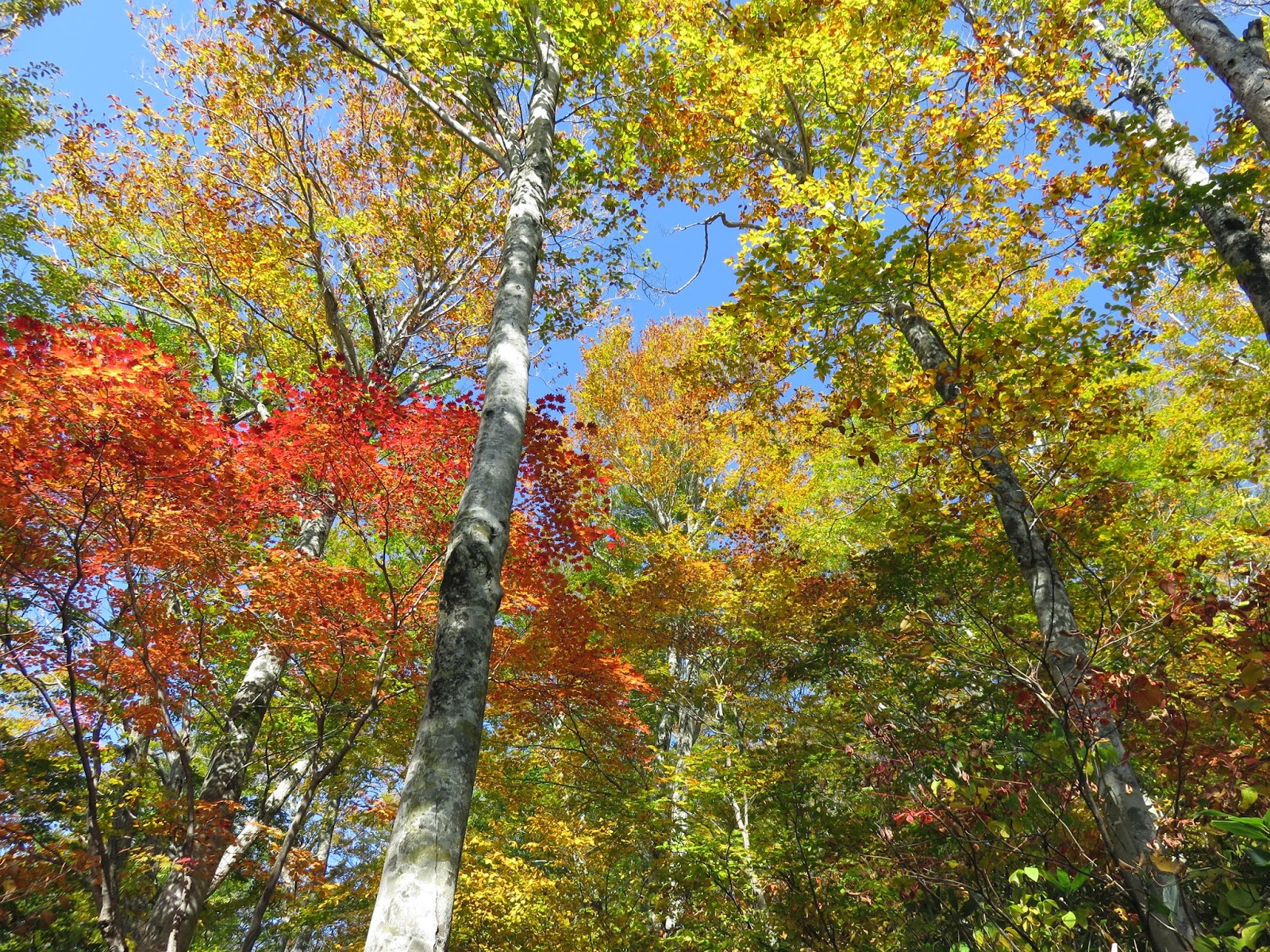 Yes, that Fukushima (福島). The prefecture in northern Japan brought to such suffering by the earthquake, tsunami and nuclear disaster in March 2011, since when it has joined a very long list in the company of places like Chernobyl, or Hiroshima, or Jonestown, wherein the very mention of the name evokes fear and disquiet. Wherein its entire story, its entire identity, in the eyes of those not in the know, is reduced to one defining calamity.

But let us get some perspective. Fukushima is large and diverse, the third largest prefecture in Japan, and is divided into three regions: to the west, historic and mountainous Aizu; in the centre, the well-connected Nakadōri; and to the east, the coastal Hamadōri. Of these, the nuclear disaster exclusion zone covers a segment of Hamadōri, and the vast majority of the prefecture is still safe to visit.

I recently had the good fortune of a weekend visit to Aizu (会津), which warrants special discussion in its own right. Historically Aizu was not only a separate domain, but a leading power in its neighbourhood overshadowed only by the rise of nearby Sendai under Date Masamune, who briefly occupied parts of it during his conquests. During the Edo Period (1603-1868), when Japan was unified under the Tokugawa shogunate, the Aizu lords became very close to the Tokugawa family and turned Aizu into one of the shogunate's most dedicated and loyal domains in the country. It was – and is – a proud territory, whose heritage reverberates to this day with echoes of the samurai and bushido warrior spirit.

This close relationship with the shoguns, however, transpired to Aizu's great sadness. Aizu is perhaps best known for its bloody defeat during the 1868-9 Boshin War, during the Meiji Restoration, in which the Tokugawa shogunate was overthrown and the Japanese emperor restored to power. Even after Edo (Tokyo) fell to the imperial forces, whose leaders and members came mostly from the southwestern domains of Chōshū and Satsuma, Aizu continued to fight on the shogunate's behalf at the core of a coalition of northern domains. Long one of the revolutionaries' bitterest enemies due to its extreme loyalty to the Tokugawas, Aizu put up ferocious resistance until it was crushed after a month-long siege of its capital at Aizu-Wakamatsu (会津若松).

Given the southern domains' special hatred for it, Aizu was dealt exceptional brutality during and after this conflict, with many of its people massacred, tortured, imprisoned or sent into exile. Furthermore, in an insult as unpardonable as insults came, the survivors were prohibited from tending to the bodies of their fallen, and these were left to decay in the streets. Aizu' defeat made the northern coalition untenable, and what remained of the Tokugawa loyalists fled Sendai for Hokkaido by sea, pursued by the imperial forces to their final destiny at Hakodate.

I have seen it written that to this day, significant enmity, or even hostility, towards Chōshū and Satsuma remains in the hearts of many people in Aizu, who find it hard to forgive this ruthless treatment. For example, in 2006, this commentator observed the following:

A few weeks ago when I was in the city of Aizu in Fukushima, Japan, there was a panel discussion which included the mayor of Aizu...(involving) a letter from the mayor of the city that would have been the capital of Choshu (presumably Hagi) asking the governor of Aizu whether they could forget the past and just get along. The incidents were over 130 years ago. There was a heated debate that involved a lot of cheering and jeering from the audience, but it was clear that Aizu would not forgive these two clans...The panel pointed out that it was the victim that should reach out for peace, not the aggressors...The conclusion of the panel was that there would be no “forgiveness” but that “dialog” should continue.

The same account goes on to mention that because tending to the bodies of fallen Aizu soldiers had been forbidden, they were never commemorated at the Yasukuni Shrine, as is the custom for Japanese war dead. This supposedly gives many people in Aizu a uniquely negative view of government officials' visits to the controversial shrine; including by the current Prime Minister, Shinzo Abe, who in a further twist, happens to come from Yamaguchi Prefecture – that is, Chōshū.

Under the Meiji government, the old system of feudal domains was abolished, and replaced by what would become today's prefectural system. This was the end of Aizu as an independent domain, for it was joined to the rest of what would become Fukushima Prefecture, but to this day it remains highly conscious of its historical clout. It tells its stories and exhibits its identity at every opportunity, retains the name of Aizu in many place names and railway stations, and has built up a very strong tourism sector upon this heritage. 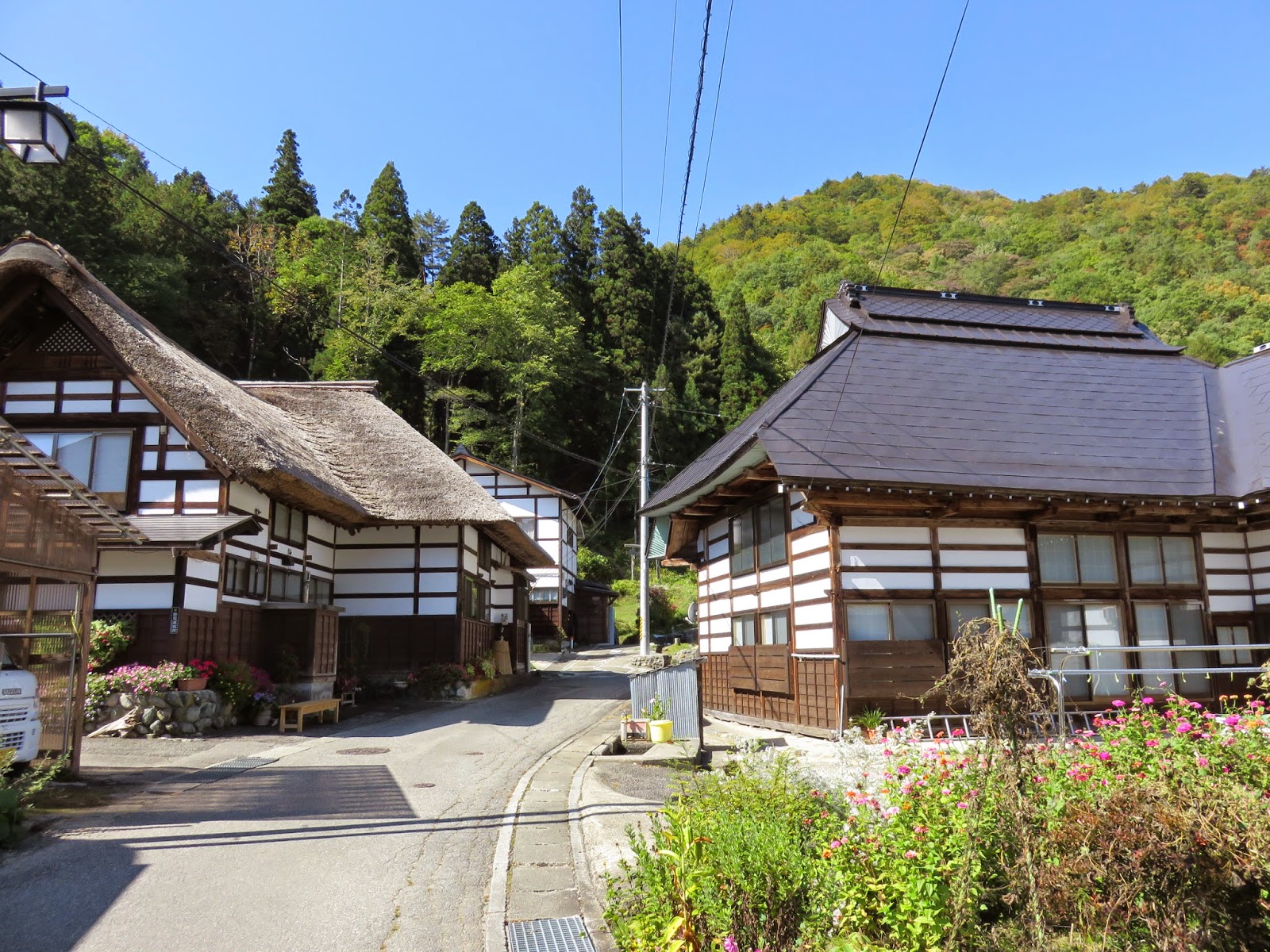 Alas for unforeseen consequences. When Aizu was incorporated as part of Fukushima, nobody could have predicted that some hundred and forty years later the March 2011 Triple Disaster, in particular the spectre of nuclear radiation, would batter that tourism sector in the stomach for no more reason than this mere association of names. Even though Aizu was not so directly affected by the disaster – indeed, Aizu-Wakamatsu now shelters some thousands of people evacuated from the nuclear exclusion zone – its status beneath the very name of Fukushima has frightened off hundreds of thousands of visitors, both Japanese and foreign, especially because of the lack of rigour and transparency in how radiation safety was assessed and communicated.

Nonetheless, I hope that this article can provide a few insights and images, and help persuade you that a journey to Aizu, Fukushima is not only quite safe but certainly worth your while. Unfortunately my own trip was short; time and resources limited me to a small exploration of its south (Minami-Aizu, 南会津), and I did not get the chance to go to Aizu-Wakamatsu. Nevertheless, I saw splendid things. Click below for the full article.
CLICK HERE FOR FULL ARTICLE
Posted by Chaobang at 07:21 0 comments