The Problems (a short story)

This story is dedicated to the millions of people, past and present, broken by the madnesses of their societies then blamed for their own suffering – especially to those who did not make it.

The Problems
A short story by Ai Chaobang, 13th September 2015 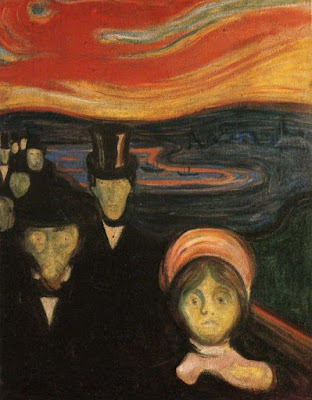 Happiness is a choice! I choose to be HAPPY!

...making it far bigger than anyone wants it to be....

...you get hurt if you let yourself get hurt...

Oh, will you just LISTEN!

Like most people, Kenichi had heard of the organisation known as The Problems. From time to time he came across the rumours of their savage attacks on people, perhaps referred to by a colleague, hesitantly of course, or hidden in the depths of the morning newspapers.

But that was as far as his knowledge went. After all, The Problems only made trouble for those who went looking for it, so people said, and trouble was something Kenichi did his best to avoid. His was a stable life: a secure job, a sound mind, steady friends, and certainly no enemies. He was the sort who watered his pot plants before leaving for work each morning, gave up his seat on the train to those in need, and never ignored messages no matter how busy he might be. What could dubious types like The Problems ever want with him?

But the moment he stepped out of the station that morning, there they were, materialising from the commuters and fellow citizenry, and in an instant Kenichi was surrounded. In the blur of beating and thrashing that followed, he glimpsed the faces of some of the network's most notorious members. Of course though they all went by codenames – Injustice, or Heartbreak, or Prejudice, or Cuts, or Corruption – their true identities were a mystery, and for all he knew they could have been anyone.

In moments they had forced him to the ground, whereupon one of them – which one is not recorded – drew a horrific blade, long and sharp like a massive needle, and plunged it through Kenichi's heart with such force that it burst out through his back. With professional efficiency the assailant thrust the blade back and forth some six or seven times, then shook it and sliced it around before finally yanking it free, at which point The Problems dispersed into the crowds, leaving Kenichi, his blood erupting two ways, to collapse to the pavement with a disagreeable thud.

Dazed and in quite extraordinary pain, Kenichi struggled for his life. “Help!” he just about succeeded in crying out, though the dozens around him continued on their way, only a handful pausing to spare him an irritated glare. A few stopped and watched him with concern, though could not arrive at any straightforward answer to the question of whether they should do anything. “Help!” Kenichi gurgled again, blood now welling in his throat.

CLICK HERE FOR FULL ARTICLE
Posted by Chaobang at 05:19 4 comments