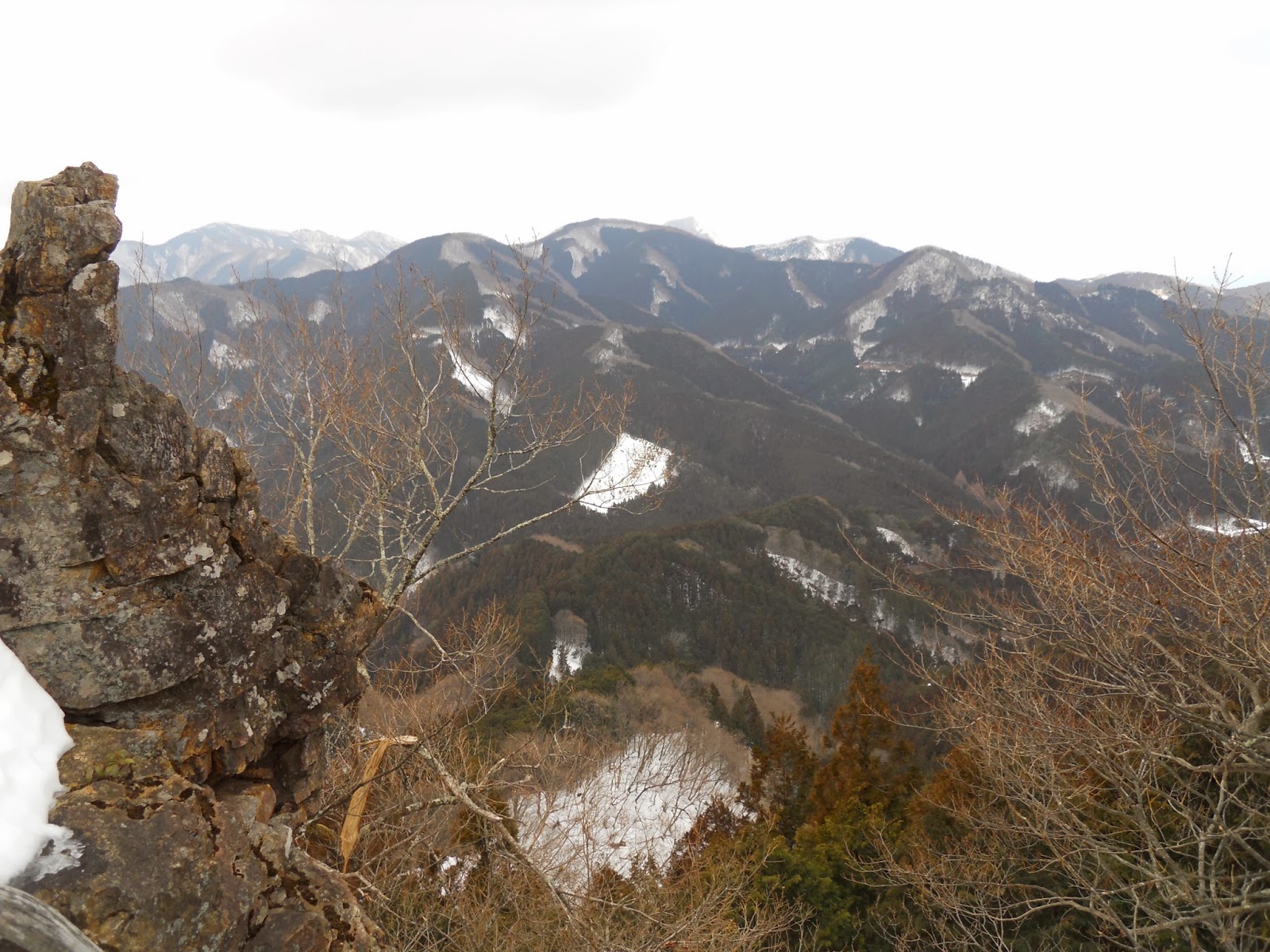 Musashi: the old province that encompassed the lands around what is now Tokyo. Though abolished in 1868 with the introduction of the prefecture system, the name was retained in many of its old districts, whether for memory, or prestige, or differentiation. To this day, consider all those train stations which bear Musashi in their names.

Oku-Musashi, or “Inner Musashi”, now refers to the mountains of western Saitama, the prefecture bordering Tokyo to the north, whose wilds represented the inner reaches of the old Musashi province. These peaks are relatively low, typically around 1000m or so, and stretch across the west flank of Hannō city as they rise, further west, into the great mountainscapes of Chichibu (contiguous with Oku-Tama to the south, some of whose mountains also feature in this blog).

This was my first hike in Saitama, and as with Oku-Tama and Tanzawa, these mountains have their own distinct character. Another level closer to Japan's central highlands, there is a certain Alpine something about Oku-Musashi. My route began at Shōmaru station on the Seibu-Chichibu Line – about an hour and a half from Ikebukuro station in Tokyo – and ascended to the summit of Izugatake (伊豆が岳), the high point of the walk at 851m. From there a long ridge with many sharp peaks trails south then east to Ne-no-Gongen temple (子の権現), then descends, gradually, back into the valley past the mines of Agano, finishing at Agano station. Though 851m might not sound like much, in a February of brutal snowstorms it was in fact quite satisfactory. 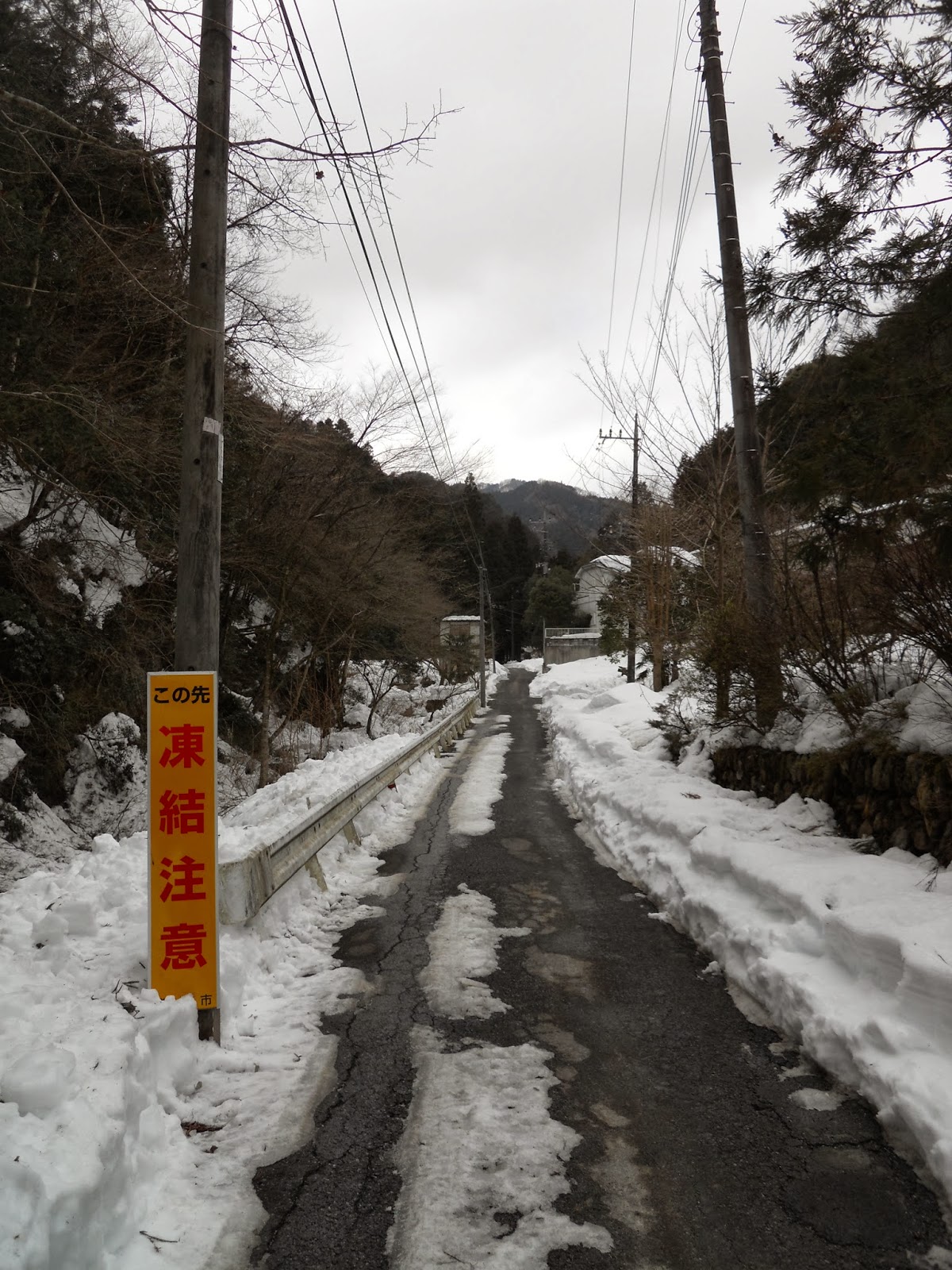 The result was an eight-hour slog through snow that reached a metre deep in places, up and down sinew-shredding gradients fit for a lunatic, along a course more properly popular for its thousands of colourful flowers and rich greenery at saner times of the year. As such I will not be presenting it here with the usual detailed instructions, for the magnitude of the snow meant I had next to no contact with the actual earth of the path at any point on the route, so I cannot purport to advise on it. If your idea of a hike is some pleasant exercise through bright and leafy nature, you might want to give Izugatake a miss until summer. However, if it is in fact a full-scale body-breaking, soul-wringing catharsis you actually want, or if you are struggling with emotional poisons only the cleansing force of the primal earth can purge, then by all means head for Izugatake right now, for you will find nothing better than these mighty snows to plough the toxins from your psyche. 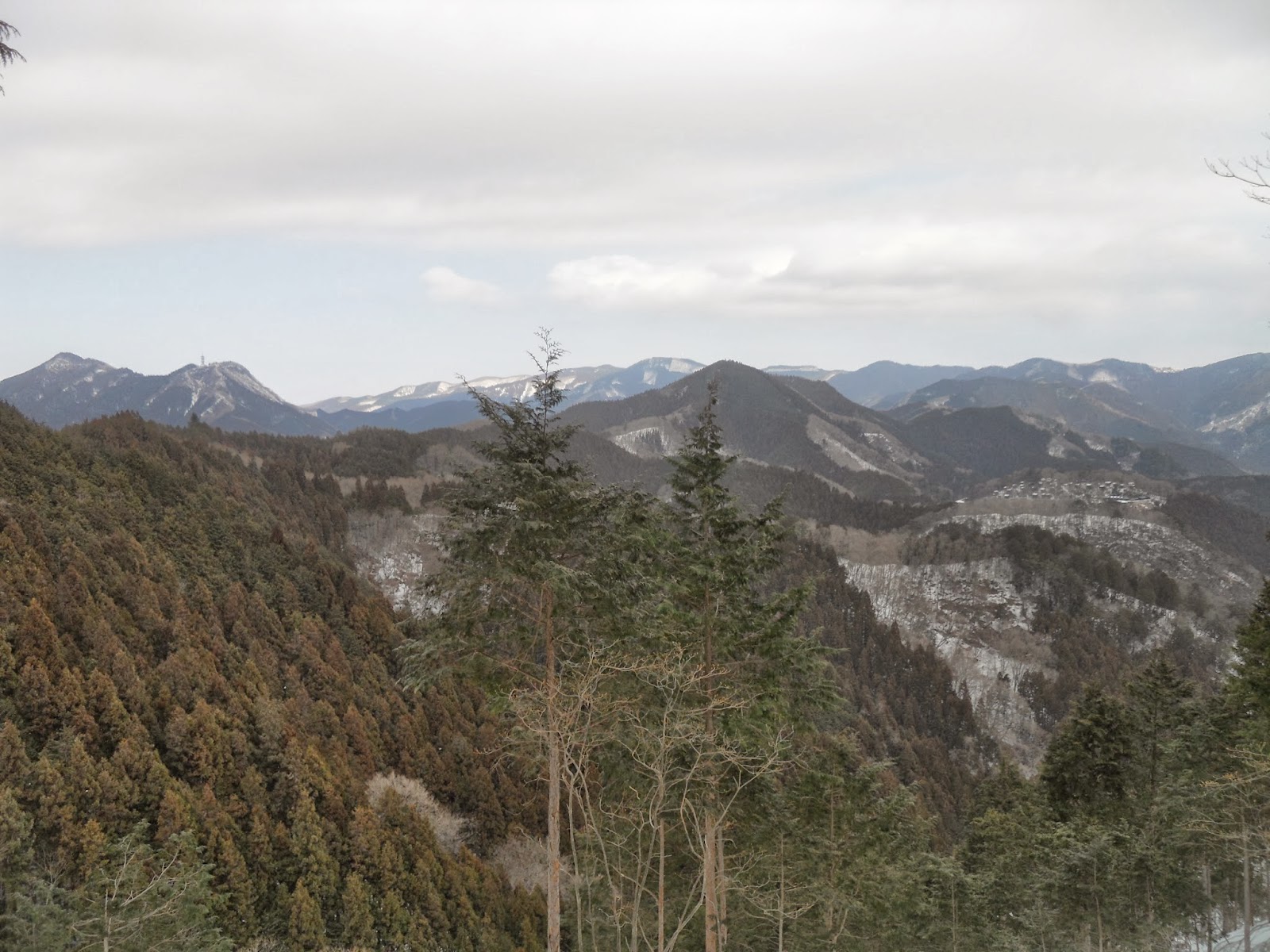 If you attempt it, give yourself at least eight hours of daylight, bring plenty of food and water, and go with maximum respect for the challenge before you. Good shoes that can survive being under snow all day (i.e. underwater) are essential; crampons are strongly recommended. Izugatake is popular enough that you will run into other people – likely elderly Japanese super-hikers – on the mountain itself, but most of the ridge sees little traffic in these conditions, and there are no services until near the end.

The route is long and often steep – imagine the North Takao Ridge with fewer but higher peaks – but the biggest drain on your energy will be the snow itself. Expect most of your footsteps to immediately sink until your other foot is level with your thigh. Expect also to fall forwards a lot when this happens; the deep, soft snow makes this safe, but you still have to put the calories into pushing yourself up again, and after dozens of times they start to add up. Definitely not a place or season to faff around, then, but if you know it is what you need, then you will come out a better person than you went in.
CLICK HERE FOR FULL ARTICLE
Posted by Chaobang at 09:14 0 comments 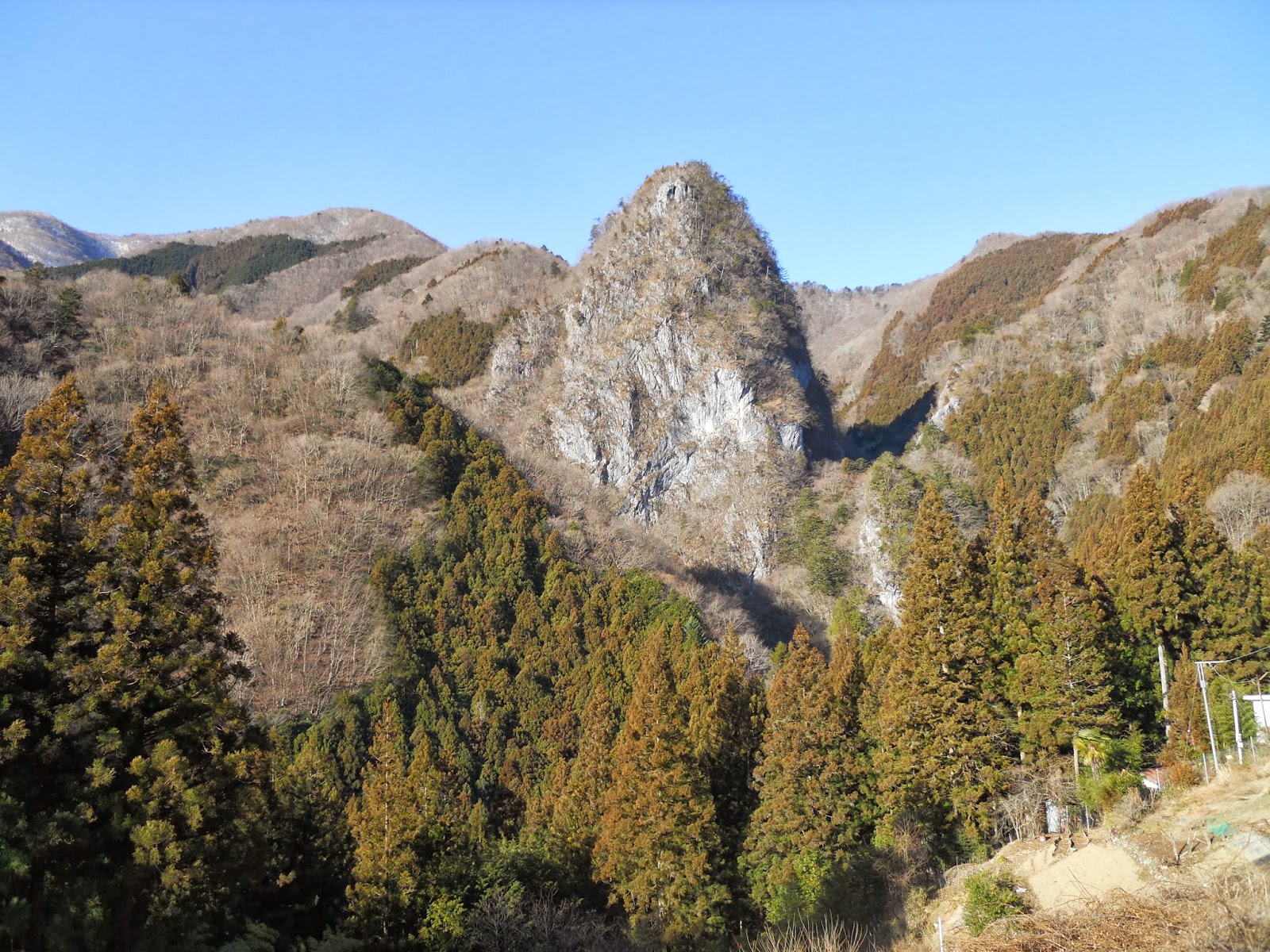 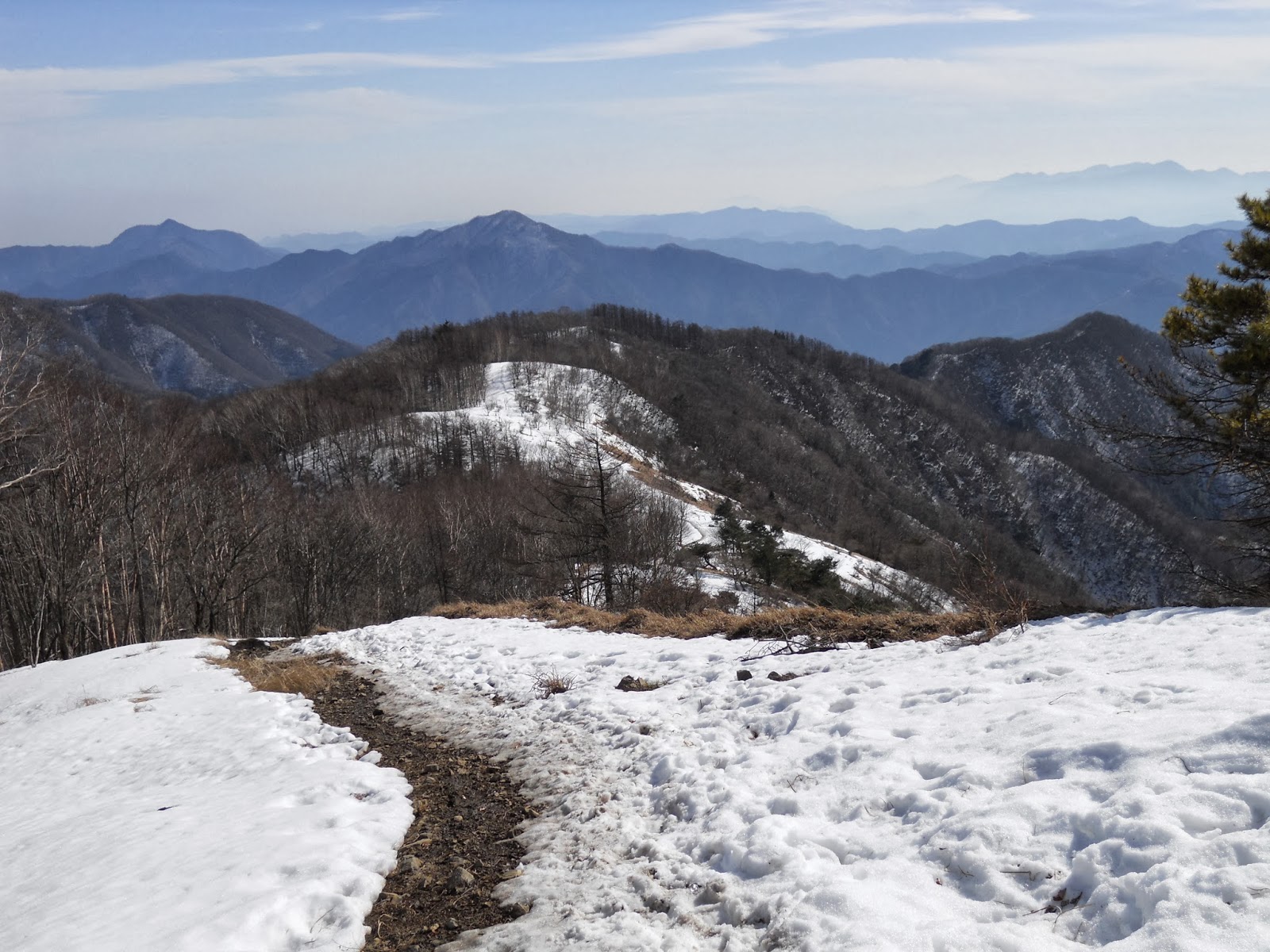 Many fine mountains rise up in the wilderness of Oku-Tama in western Tokyo. A couple are covered on this blog: the sacred Mitake-san and pointy Ōdake-san, as well as the Takamizu three mountains.

Further in are the more serious mountains, like the forested pyramid of Gozenyama over Lake Oku-Tama, and the lush and rocky valleys and streams of Kawanori. Neither of these are featured here, as I have saved them for a Tokyo hiking guidebook I am currently writing (and seeking editorial oversight and publishing for – feel free to leave a comment if you know anyone who might be interested).

And then, deeper still, you have buggerations like these. 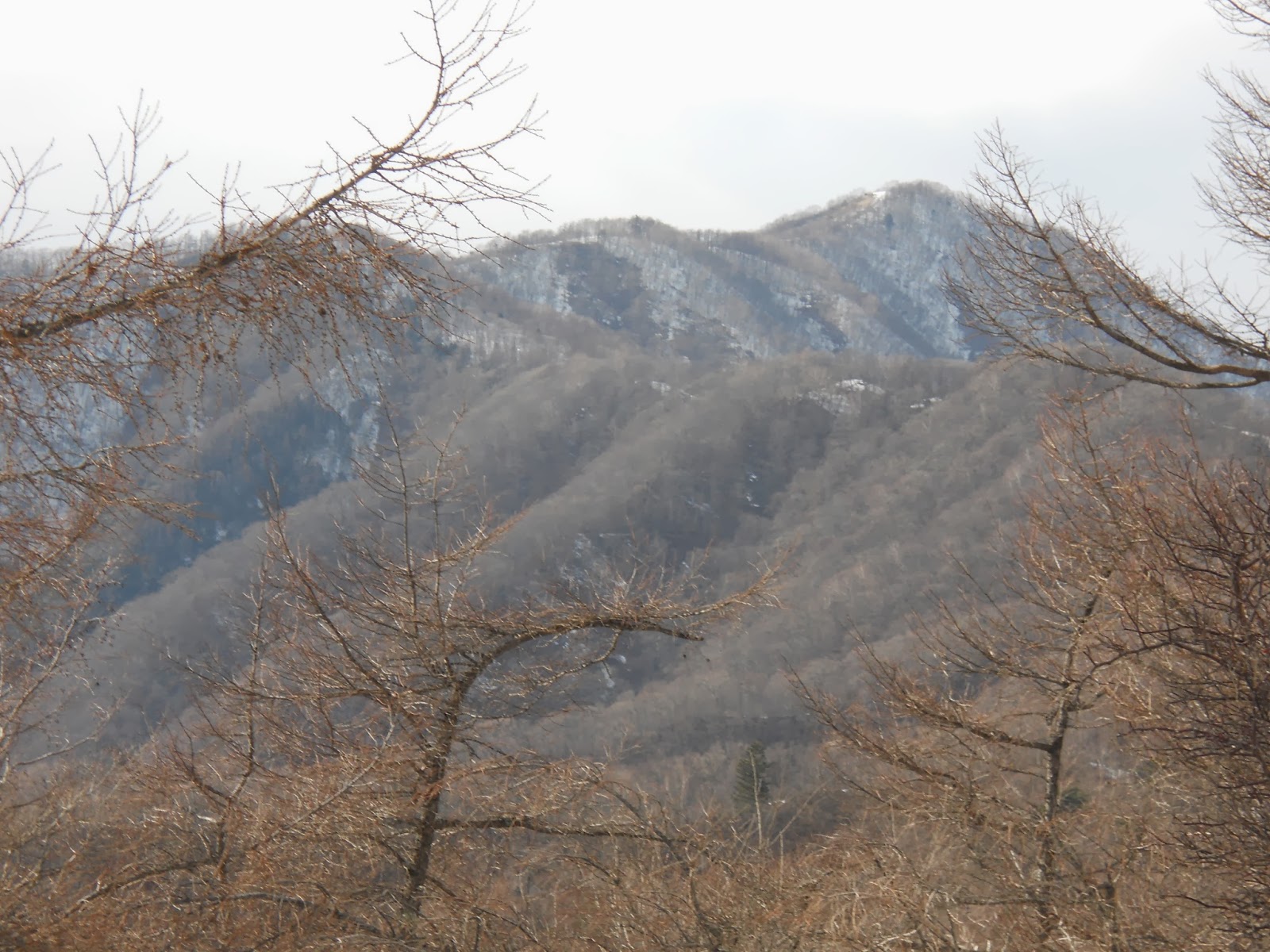 The high peak on the right is the 1737m-high Takanosu-yama (鷹ノ巣), or “Falcon's Nest mountain”. Still within the Tokyo Metropolitan Area, it is a herald, the first prominent peak on a ridge that rises west to Tokyo's edge, to Kumotori-yama, the capital's highest mountain at 2017m. It is said that during the Edo period, government officials would come to Takanosu to hunt hawks – and wanted to keep the birds to themselves, so had the mountain placed off-limits to the general public.

Nowadays the government won't stop you, but you still have to convince the mountain itself of your worthiness. For a good challenge, scale it from the north side, starting in Nippara, one of Oku-Tama's isolated mountain villages famous for its limestone caves. This confronts you with a nasty, calf-crunching sustained ascent up a vertical distance of 1.5km, a gauntlet of narrow slope trails and merciless gradients. After reaching the summit, another four hours along the gentle but neverending Ishi Ridge will return you to Oku-Tama town and the train station. And if you are feeling particularly insane, you can do this now, in February, where peak and ridge alike soar high above the snow line and those punishing trails are locked in ice. Like this. 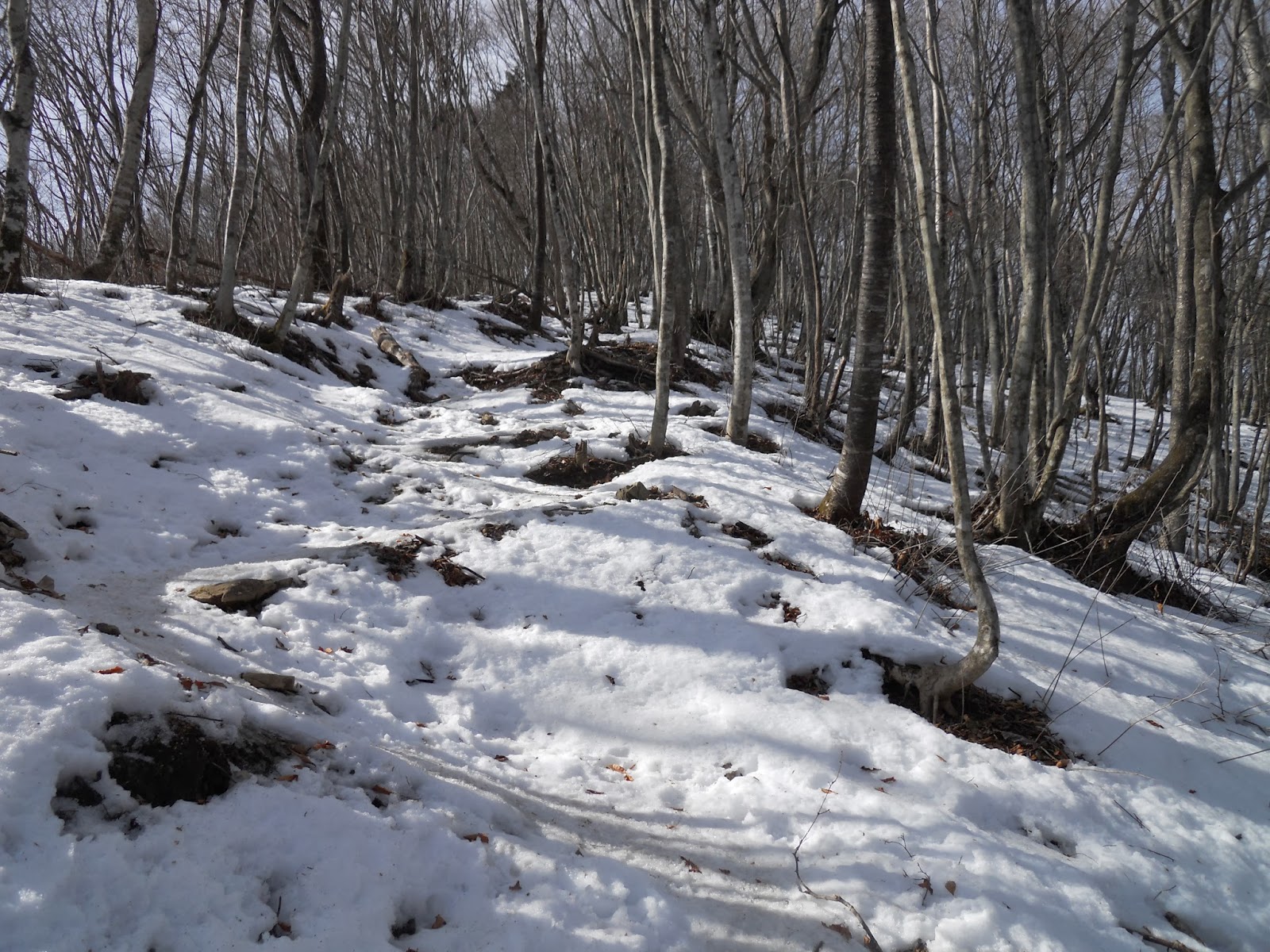 But if you do, you may just find that the mountain agrees that insanity is better, indeed, than “normality” in a world at any rate gone mad. And it will reward you, in proportion, as you stagger onwards and upwards, puncturing at last through that mad world's ceiling to come upon a landscape of utter wildernesses of freedom, more formidable than you could ever have the right to expect so close to a world-class urban colossus like Tokyo. And beyond the peak, you may just find you have the ridge all to yourself: an authentic and haunting winter wonderland, where furry animals stop to watch you, mountains line the horizons, and the madness of humankind fades to oblivion. 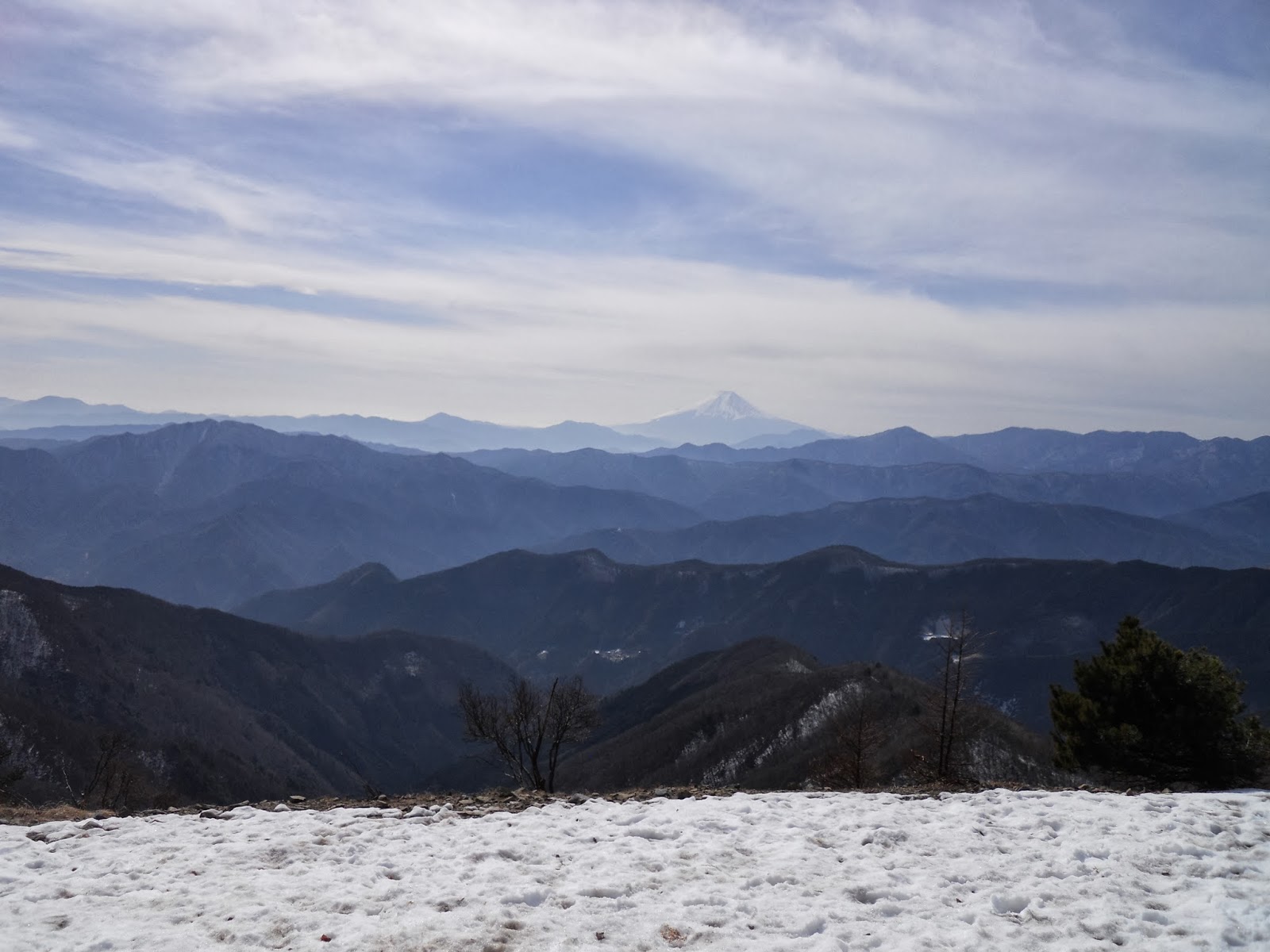 Needless to say, this is not a picnic. “Insane” is not the same as “careless”. Takanosu in the snow is right up against that difficulty threshold where specialist ice equipment becomes mandatory; crampons or at least a hiking stick will do you no harm. Sturdy shoes with good grip are essential, as are a map and a compass. At times the ascent becomes a full-scale scramble on all fours and a serious test of body and mind, and under no circumstances, save the most extreme, should it be attempted in wet conditions, especially at this time of year. Start early and plan absolutely to be down by sunset, and over-estimate how much food and water you will need, for the ice and snow will wear you down fast. Note too that the entire route, though well-signposted and hard to get lost on, is unserviced by shops or facilities.

Above all, treat the mountain and its life with respect. You don't have to submit, but nor should pride have a place in your rucksack. Deal with the mountain as an equal; teach it and learn from it. If you do, then the trees, the rocks, the snow and the mountain itself will be your friends and help you on your way. Literally, as we shall see.

Oh, and watch out for bears. 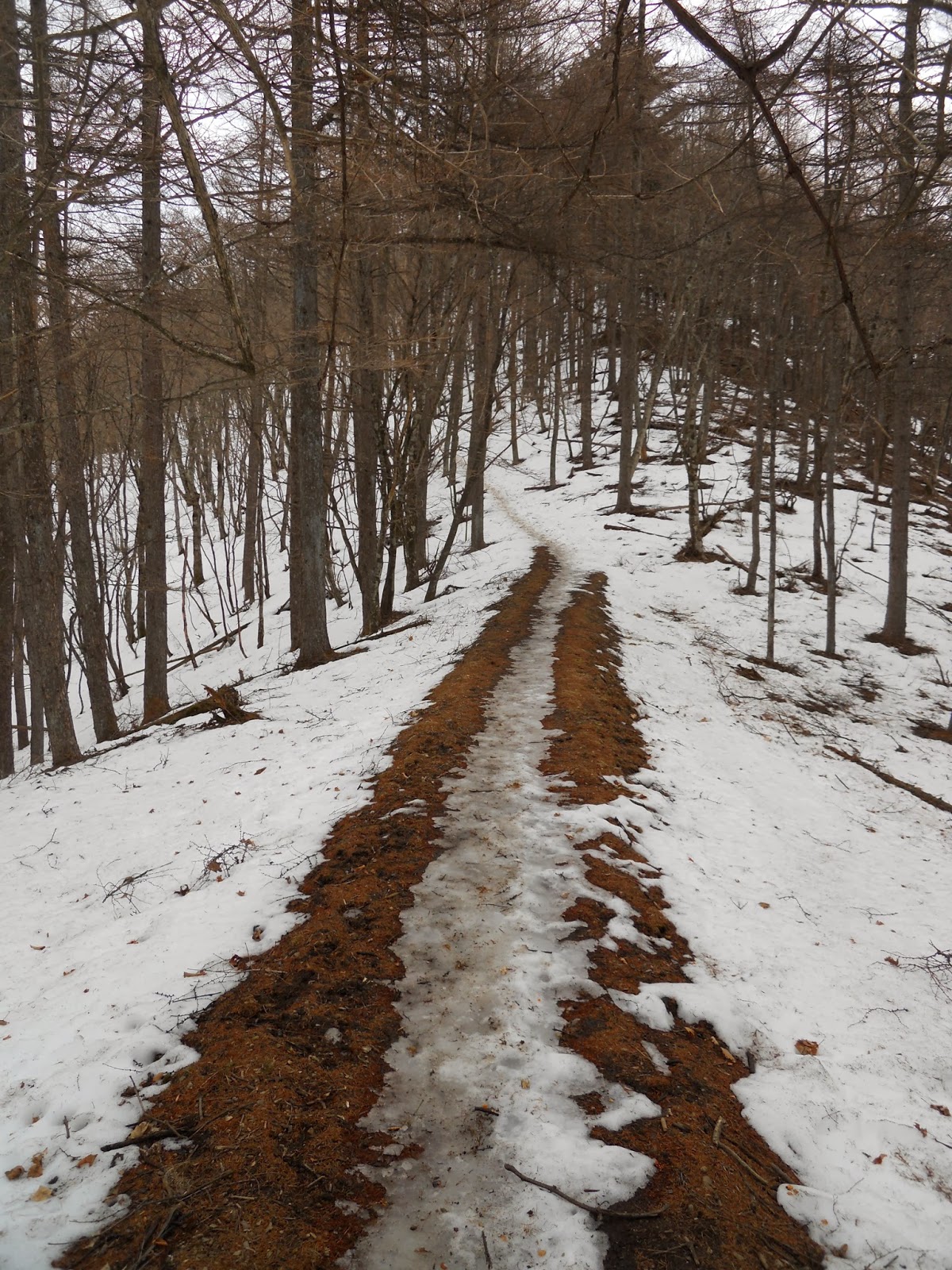 Takanosu-yama
Length: 15.7km – or 32,161 steps, as reckoned by Comrade Nintendo 3DS step counter.
Hiking time: Allow at least 8 hours.
Height: The first 3 hours are a sustained climb from 630m (in Nippara) to the 1737m peak of Mt. Takanosu. The rest is much gentler but very long, with some short steep descents on occasion.
Access: Take whatever train line is convenient out west to Tachikawa, then ride the Ōme Line all the way to the end, to Oku-Tama station. Then take Nishi-Tokyo Bus No. 20, right outside the station, to Naka-Nippara bus stop (中日原), which takes 28 minutes and costs 450 yen.
Click here for bus timetable: left column for weekdays, middle for Saturdays, right for Sundays and public holidays. From central Tokyo this whole journey takes about two and a half hours, so be sure to plan precisely with train and bus times.

CLICK HERE FOR FULL ARTICLE
Posted by Chaobang at 13:32 0 comments