The Abuse of Gratitude

We are often reminded these days of the wonderfulness of gratitude.

If it is not presented as the solution to all possible problems, then it is at least, we are led to believe, the next best thing, a vital ingredient in health and well-being and a sign of moral and spiritual correctness. If you have achieved fulfilling work and a comfortable life, then supposedly it is because you spent an hour a day listing fifty to a hundred things to be grateful for. If on the other hand you are stranded in misery, then what reason could there be, we are led to believe, other than that you are not grateful enough?

It is time to correct this mistake.

Gratitude is not as magical as advertised. On the contrary it can be put to savagely destructive effect, and as a social tool to shame the vulnerable and the different it can turn into barefaced psychological violence.

That is not to say that gratitude is inherently a bad thing. On the contrary, when gratitude is sincere, deserved, and expressed without ostentation, then by all means let us celebrate it. It is good that we should feel thankful for blessings and kindnesses received from others, be they humans, other animals or plants, or the wider natural world. We are a social species living in interdependence with our planet and with one another, and through gratitude we recognize and value those relationships and encourage ourselves to reciprocate.

But this is already so ubiquitously proclaimed, from ancient religious and philosophical texts to endlessly regurgitated slogans on contemporary social media, that we need spend no further time on it. Instead, let us turn to our abuses of gratitude, of which it seems to me there are two types.

The word tripping is usually applied to the consumption of psychedelic drugs. The parallel is close enough to use that term here. I will not pretend to neurochemical expertise, but the behaviour changes that often come with intoxication on gratitude seem so stark that I am sure they reflect some chemically altered state of consciousness that bears comparison to the effects of mind-altering substances. Consider those ruthlessly euphoric smiles; that total imperviousness to attempts to engage in logical conversation; that instantaneous guillotining out of anything remotely construable as “negative”; and above all those steamrolling proclamations of gratitude for anything and everything possible, including things all people have rights to or were never actually given.

Of course, when gratitude-tripping affects no-one other than the individual, it is entirely in his or her rights, and we cannot fault him or her for it any more than we might for his or her private choices on smoking, alcohol and so on. As in those cases however we can still be alert to its potentially addictive excesses and scrutinize it as a widespread social phenomenon. As with other mind-altering exercises, escaping to gratitude is not a substitute for recognizing and solving problems and at worst can hinder efforts to do so. It can represent an acceptance of the “life’s unfair” and “nothing we can do about it” dogmas, and a forgetting that life is as fair as we together make it, and that most significant problems today are systemically caused by social structures we created: exploitative economic systems and working arrangements, gender and its full range of ills, a worsening politics of tribalistic violence and prejudice, climate and resource stresses, and so on. All of these are problems we can resolve, if we have the courage to acknowledge them and support each other in the struggle to improve the world.

Each of us has likely suffered incredible pains – and pain breaks people – from at least some of these nightmares. That they deal them out to us all on a massive scale has helped spread the myth that they are natural and inevitable parts of life, which could not be further from the truth. They are socially inflicted injustices: that is, we can do better than them, we are entitled to better than them, and in the face of any one of those ills, ingratitude is a totally justified response.

Gratitude-tripping is thus a problem in that it can drive us in the opposite direction, reinforcing the pressure to accept a broken world. But it becomes acutely cruel when it is practiced not merely as an individual’s own retreat from courage, but as something designed for other people to see – in particular to shame those suffering too much to be able to express much gratitude themselves, and to pressure them to join that gratitude-intoxicated illusion which holds that the world is fine. In other words, it becomes gratitude-shaming.

These days the likelihood that you have either seen or experienced this is surely not low. The gratitude-shamer hears a grievance or sees somebody suffering, and in response shames them for not being grateful enough. There is an active-passive spectrum for this. They might actively shame by directly attacking the sufferer for the selfishness of expressing his or her misery, and demanding he or she be more grateful instead. Or they might shame more passively by indulging in some very loud and visible gratitude tripping, as though ignoring the sufferer but with the clear design of inflicting on him or her, plus any witnesses, the same message. Other platitudes and clichés from the box of tools for trivializing other people's suffering are often deployed to accompany this: “everyone has problems”, “others are suffering worse than you”, “choose to be happy”, “be thankful for what you have” and so on.

The underlying fallacy at play here is often the suffering contest fallacy. It presumes that suffering is universal and inevitable, and that there is value in comparing one’s suffering with others, in particular to be grateful at the thought that others in the world – commonly stereotyped as “children in Africa” or “people in developing countries” – are suffering worse than you. A major thrust of gratitude-shaming is usually to gratuitously remind the target of this fact, seeking to make them feel guilty and selfish for their own pain and placing pressure on them to accept and be grateful instead.

In the first instance, this is rarely effective. For every case in which it relieves its target’s pain, there are countless more in which it drives them deeper into shunned and alienated agony, and it is no coincidence that suicidal people are among those most targeted by this kind of shaming. On top of that, the reasoning behind it is broken. Once more, those problems are usually society’s creation and society’s responsibility to solve, not things to be accepted; moreover you do not know how much that person is suffering because you are not them. Every person experiences things differently, has different strengths and vulnerabilities, and there is no honourable course other than to take at face value that he or she is suffering in proportion to his or her expressions of that suffering; to treat it as dramatic or exaggerated is an act of abuse. If you were going through the same ordeals as him or her you might find it trivial, but for all you know he or she could be experiencing it as the most horrific of all imaginable hells.

On top of that however the suffering contest fallacy is plain barbarous. Aside from its obvious ethical dubiousness (we are supposed to feel better at the thought that others are going through pain even worse than ours?), it can be wheeled out to trivialize and dismiss all suffering in the world except the very worst possible. Whatever your pains and grievances, you can expect no kindness, no compassion, no warmth: instead you are supposed to stop whining and be grateful, because there are always those more impoverished, more oppressed, more in danger of violent death; there are always more tyrannical governments, more violent police, more insufferable relatives, more disadvantaged classes and more bloody atrocities than whatever insignificant nothing you have the gall to complain about. Like this, gratitude shaming becomes a licence to cause – or worse, stand indifferent to – any person’s pain, then to kick them even deeper into it by trivializing it with a meaningless comparison. 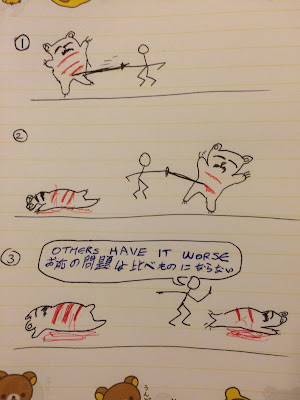 Thus is gratitude abused into a tool found ever in the hands of the violators and oppressors: a thing not for mending hearts but breaking them into smaller pieces, not for healing wounds but for tearing them asunder. What does this really represent? In simple terms, a flag held high and proud to signify the shaming individual’s or society’s failure of empathy.

In an age when empathy has itself become a popular catchphrase and a thing we constantly insist others should show us, gratitude-shaming represents the barefaced hypocrisy with which we brandish that concept of empathy, and the hollowness to which we thereby reduce it. The real might and value of empathy is its power to show the miserable and the wretched that they are not alone: that we love them, we care for them, we recognize their suffering as unjust, and we will be there with them in deepest emotional solidarity in their struggle against the forces that caused it. Gratitude-shaming, in its capture of empathy, turns that on its head: empathy becomes the obligation to laugh when others laugh even if you or others present are sad, to join in with the gratitude-tripping chorus of intoxicated howling. It means to pretend you cannot see those who are struggling, and most of all to keep your pain to yourself, to never dare express it in the presence of others, lest you be judged and shamed as an ungrateful, empathy-lacking villain.

Perhaps in the end it is just another reflection of that greatest of humanity’s weaknesses: arrogance, especially the arrogance of large groups. To be there for those who suffer – to accept that they may have a point – is to open our minds to the possibility that the world, in particular those parts of the world we call our own, are not okay. It would be to admit that our societies have got things wrong, can do a lot better than they are, and must always be open to criticism.

In this age where raving tribalist nationalisms are emboldening themselves on every continent, baying for the blood of anyone who challenges the narrative that “we” are great and “they” are foul, it is clear that we still have a profound problem with finding this collective humility. Those who suffer within our in-groups remind us that we too are not all that great, and we loathe, abhor and ostracize them for it. We do not want to feel that guilt and shame, so instead we project it back onto them in punishment, and what more twistedly effective way to do so than to dress it up in all the magical smiles and starlight of gratitude?

May we be grateful when and where it is due. But may we learn that ingratitude also has its place: that there are times, and those times are many, when we have every right to say no to injustice and oppression that should not exist, and that it is in the public good that we do so.

Let us never demand gratitude of others, and never grace it to those who demand it of us. Rather, let us be there for those who suffer, show them compassion and love, and stand at their side in the struggle against the forces that have harmed them. Let us end the suffering contest, and instead take suffering as a problem to be solved together. Let gratitude be abused no more.
Posted by Chaobang at 03:29 2 comments