The Old Way into Kanto - Ashigara Pass and Yaguradake, Kanagawa 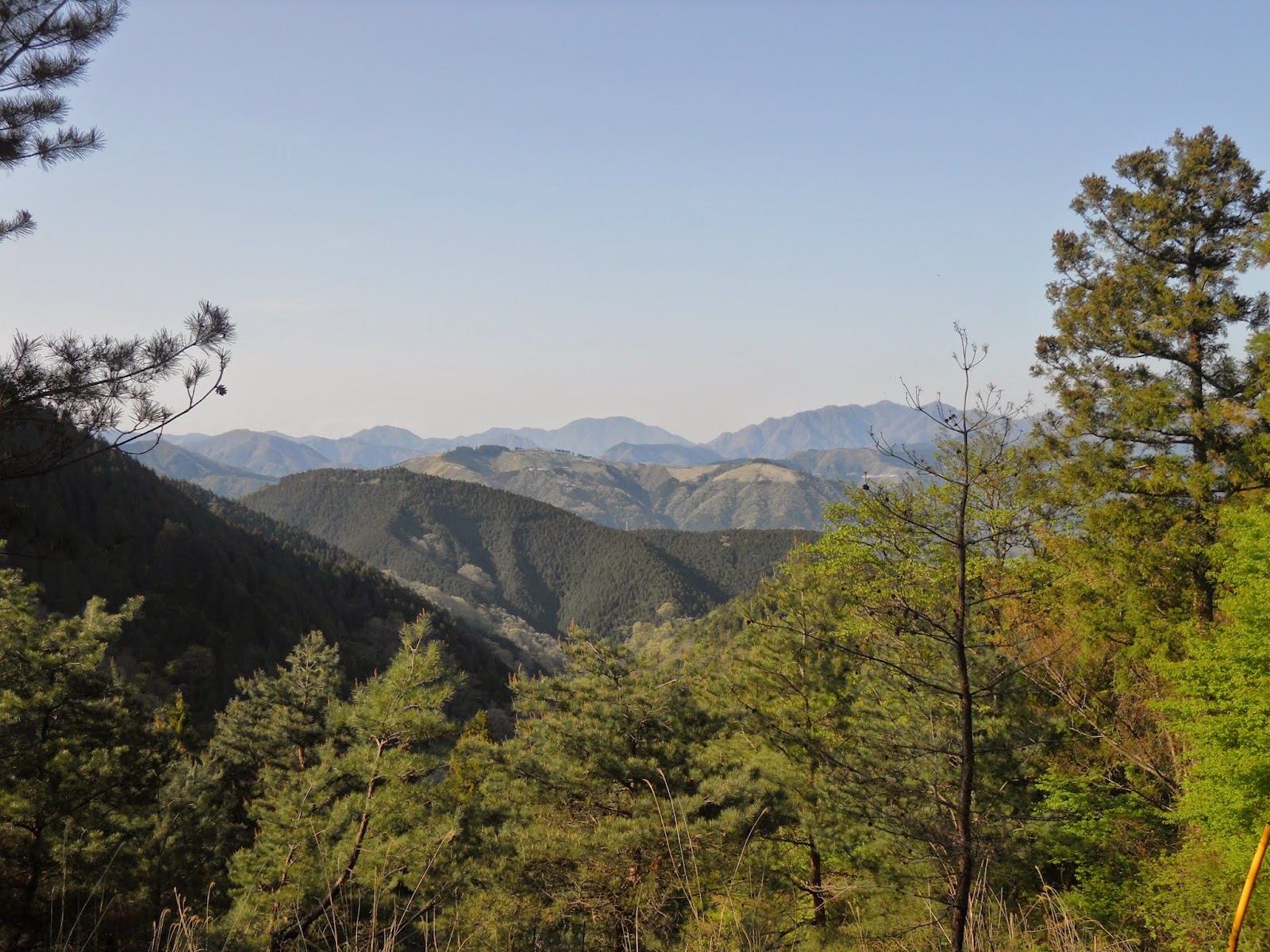 The mountains along at the western border of Kanagawa Prefecture draw the limits of the Kantō plain, and long represented an imposing barrier between Japan's old Kansai heartland to the west, and its later core – Edo/Tokyo – to the east. In the bottom corner sits the Hakone caldera, and north of there it is mountains, mountains and more mountains until the Sagami River and the pass through to Yamanashi.

Outside Hakone's northern rim runs 759m-high Ashigara Pass (足柄峠): a deep and narrow valley, and in old times the most accessible gap in this barrier. But with its susceptibility to eruptions of nearby Mount Fuji, and the rise in significance of Hakone and Odawara, this route was gradually eclipsed in favour of the Tōkaidō highway through Hakone itself. 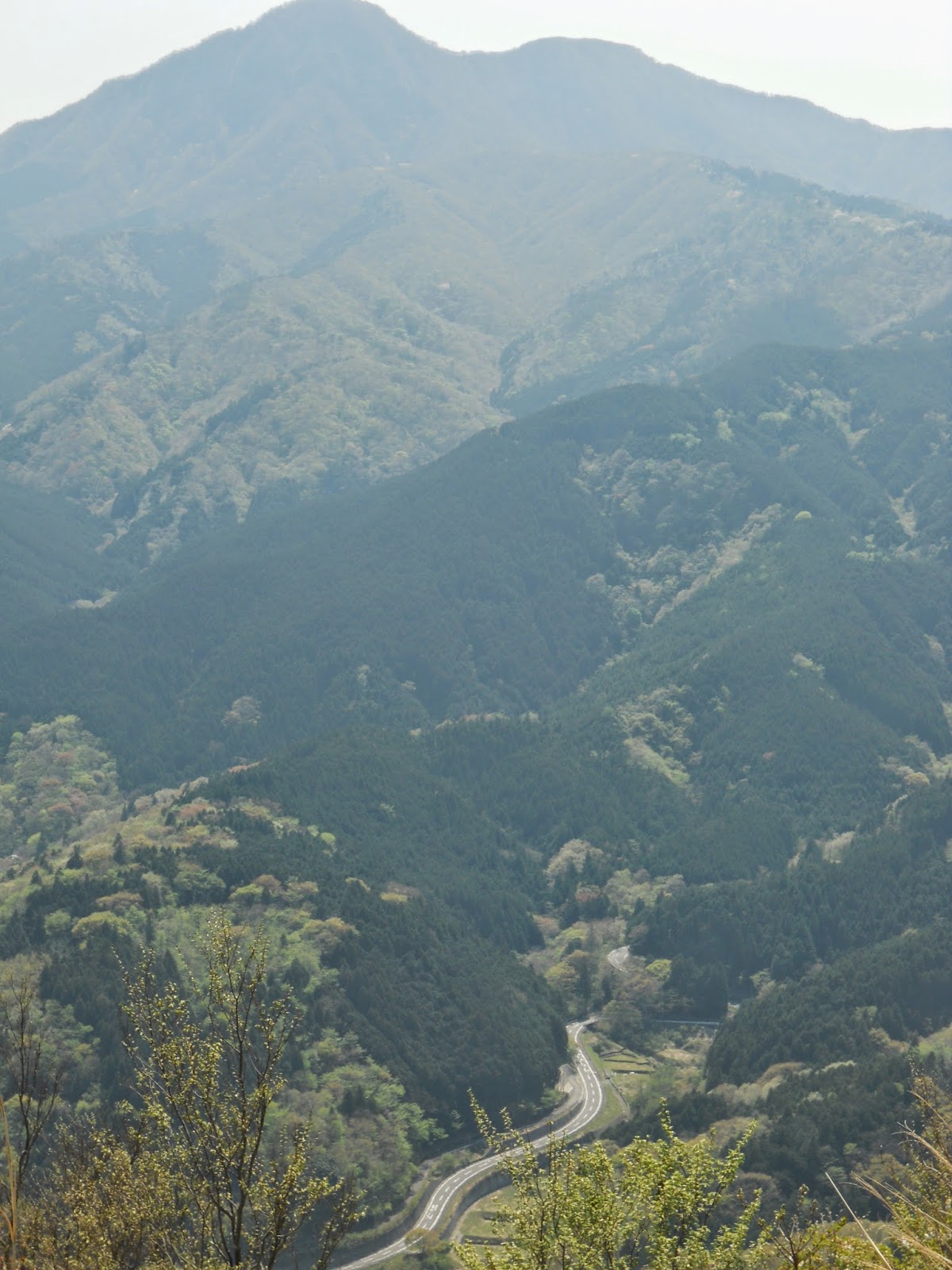 You can read about that Hakone passage here, with its nasty Edo-period checkpoint. The mountains of Hakone's northern rim, Mt. Kintoki and Myojingadake and the ridge of bamboo between them, as well as Hakone's central lava dome of Kamiyama, also feature in that article.

Those are all on Ashigara Pass's south side. A different mountain stands on its north: Yaguradake (矢倉岳), a peak with a funny domed head.

Yagura (矢倉) means “watchtower” or “turret”. I do not know if such a structure once stood here, but you would struggle to find a better place to put one. Yaguradake's summit commands an open panorama, arcing from the Tanzawa Mountains to the east, across Odawara and Sagami Bay, then down Ashigara Pass and across to Hakone's mountains opposite; and finally round to the west, where it affords a remarkable view of Mt. Fuji and its surrounding lowlands.

To control this vantage point is to control Ashigara Pass. From here you can spot anything which tries to get through the ravine below, be they armies marching under rival warlords or disgruntled daimyō (feudal-era lords) rolling in from the west to invade the capital; or equally, any response therefrom dispatched by the shogun. From here your signals would reach far in both directions, across the uninterrupted flats, or even to ships out at sea. And there are only few ways up the mountain, each of them steep, dense with foliage and very defensible. And on top of all that, when it's someone else's shift, this site gives you the privilege of a sunlit nap on the grass or a classic picnic lunch with Mt. Fuji in the background. 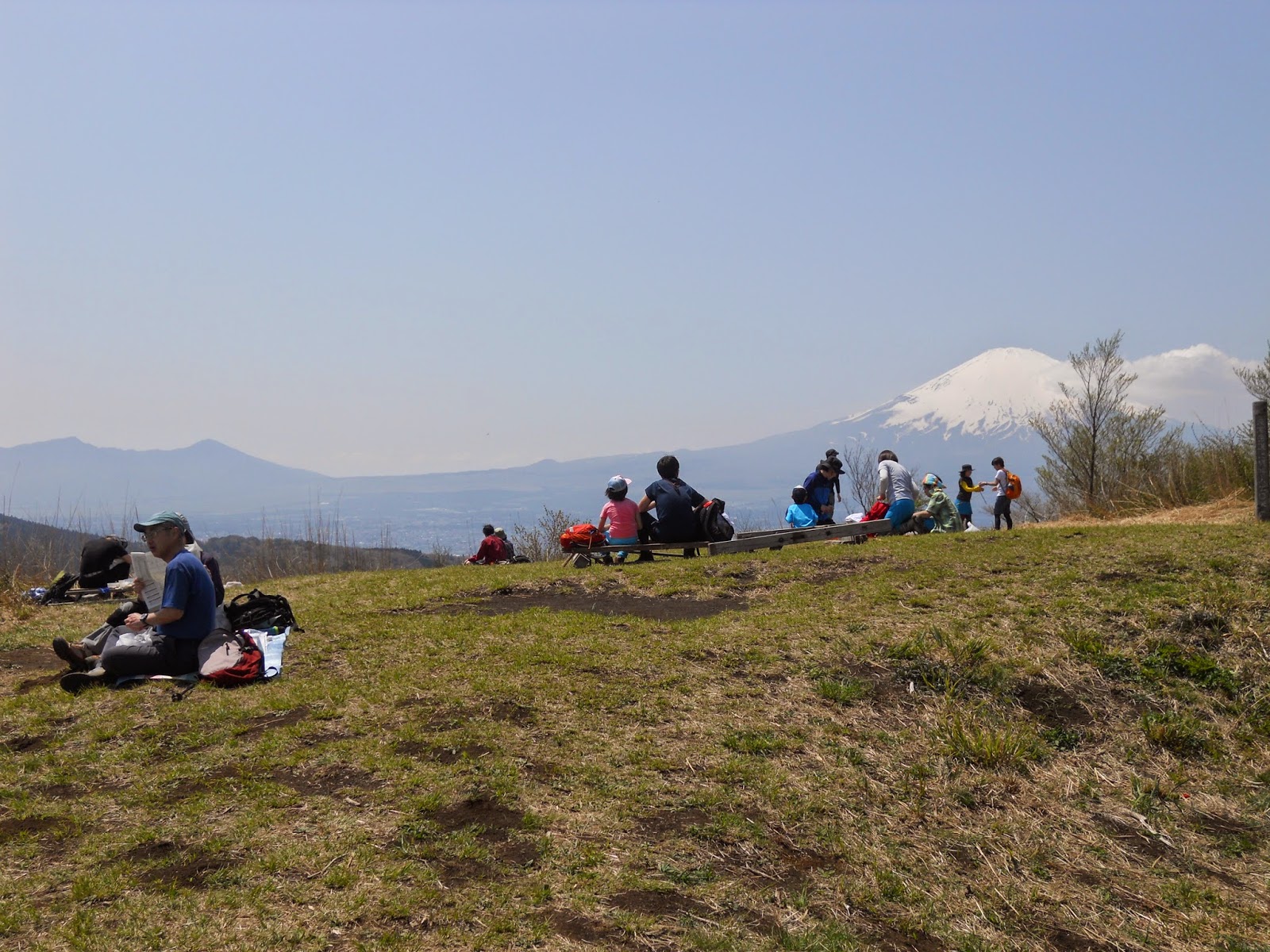 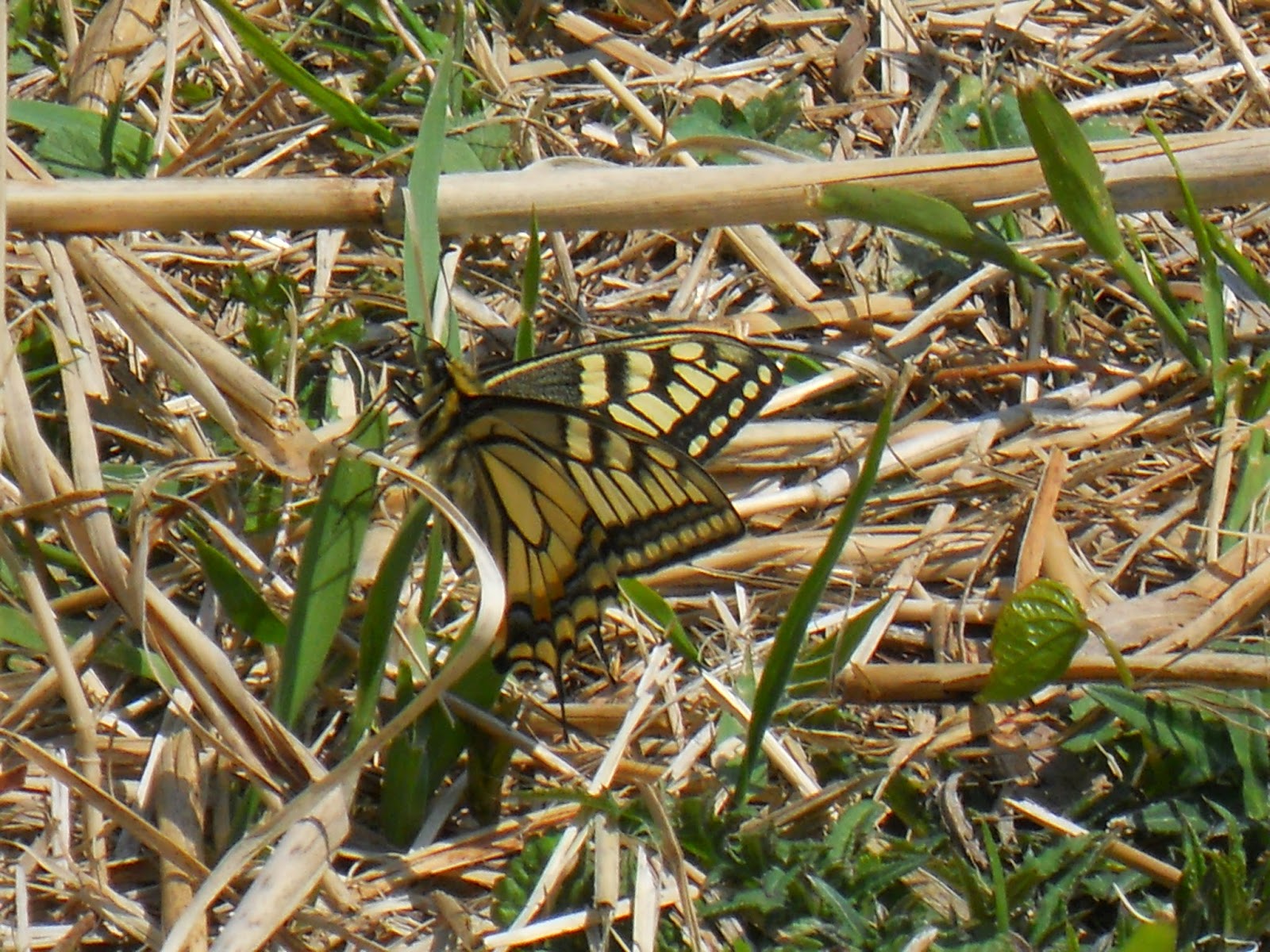 This is a moderate hike. The way up Yaguradake is steep, but the ground is gentle, and it only takes an hour and half to climb at gentle pace. To get there, take the Odakyu Line to Shin-Matusda station (新松田駅), then go to the bus stops outside the North Exit and take the Hakone Tōzan Bus bound for Jizōdō (地蔵堂). (Timetable here: the correct bus is the one with 地 next to its times.) Get off at Yagurazawa (矢倉沢), where the route starts. The bus ride takes about 27 minutes and costs 660 yen. 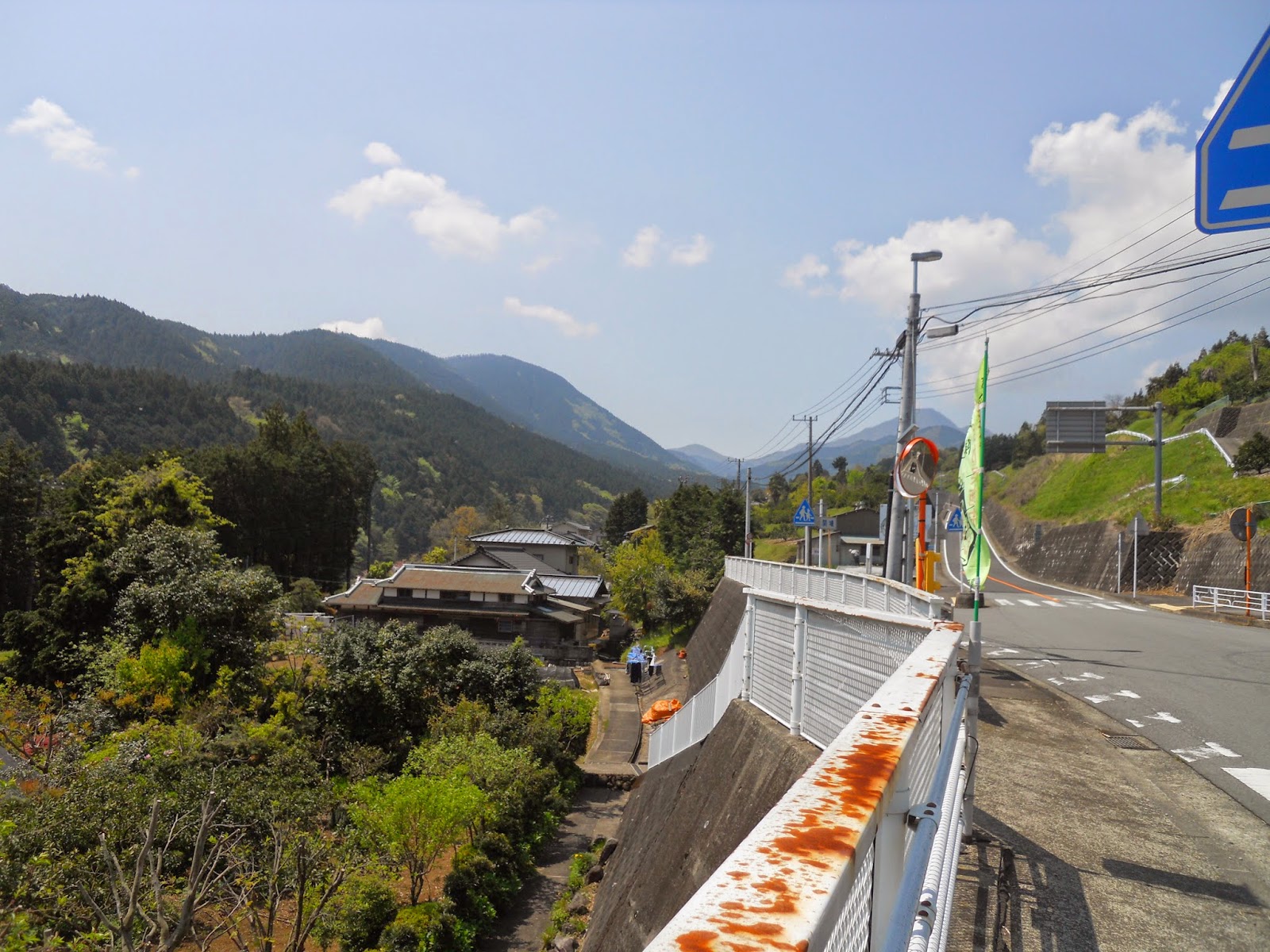 After climbing the mountain, the fuller, most fulfilling route would then be along the forested ridge to the north and east, arriving in Yamakita village near the famous and beautiful Shasui Falls (洒水ノ滝); but a certain problem makes this route impassable at present, as we will see, so I cannot currently recommend that east trail. Instead you should go down the way you came, or take the other path down into Ashigara Pass itself, where there is probably a bus stop.
CLICK HERE FOR FULL ARTICLE
Posted by Chaobang at 08:57 0 comments 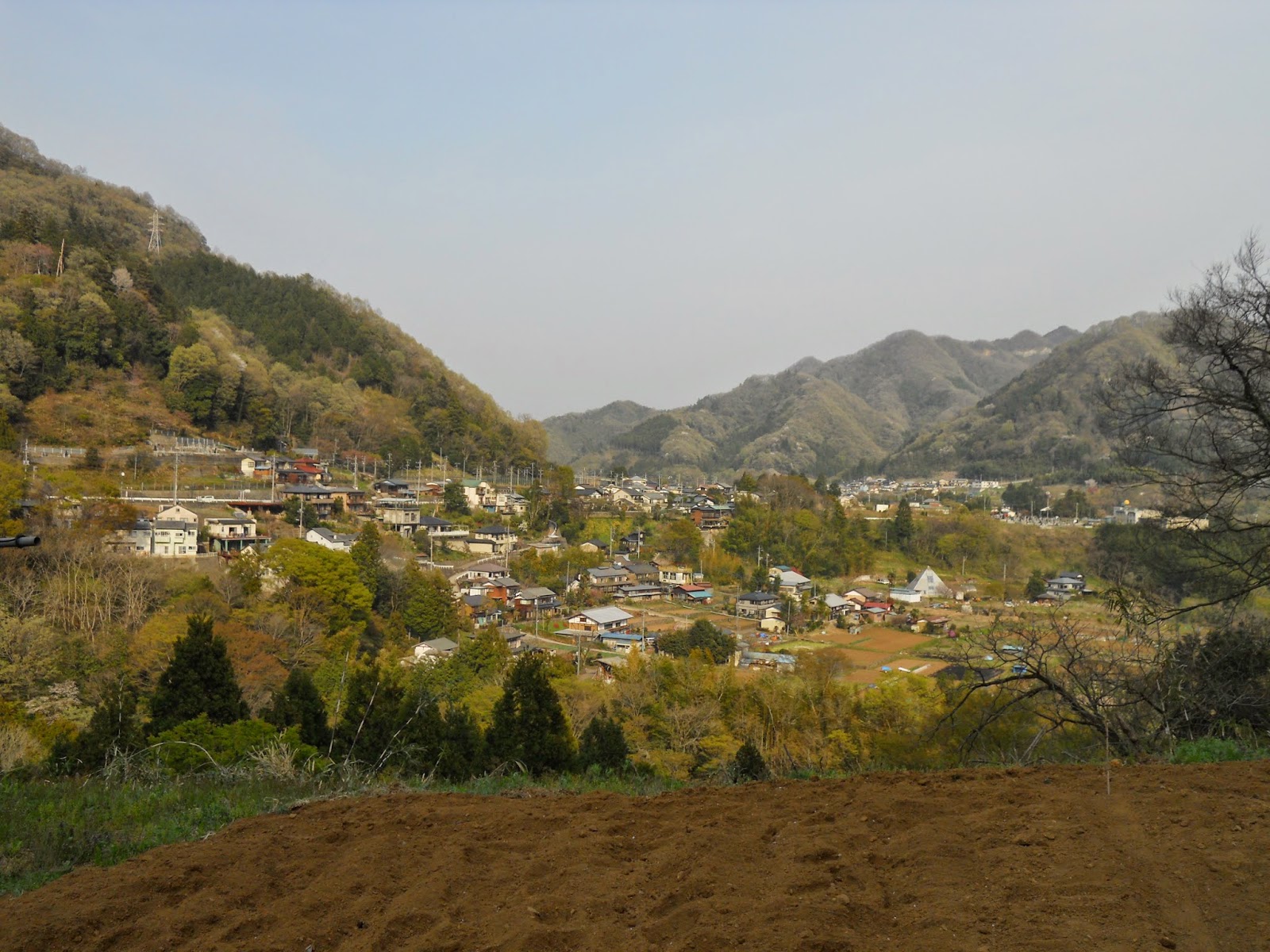 West out of Tokyo, the first place you come to is Yamanashi Prefecture. Yamanashi is landlocked, fertile and mountainous – Mount Fuji occupies a big chunk of its southern border – and it is here that the relentless urban expansion slows, trickling away into valleys and mountain passes that rise, in the north and west, towards the central Japanese Alps.

The Chūō Line railway escapes straight out of the capital through here, and in so doing traverses the municipalities of Uenohara and Ōtsuki. These are “bedroom communities”, many of whose residents commute into neighbouring Tokyo; but for the most part, these realms are of mountains, forests, and picturesque little towns neither fully urban – for all their farms and greenery – nor fully rural – for their density and infrastructure. The mountains are relatively gentle, in easy reach of the railway, and not as frequented as the hotspots of Oku-Tama or the Tanzawa range. And this, along with the views afforded by their special proximity to Mount Fuji, makes them attractive and under-represented places to roam. 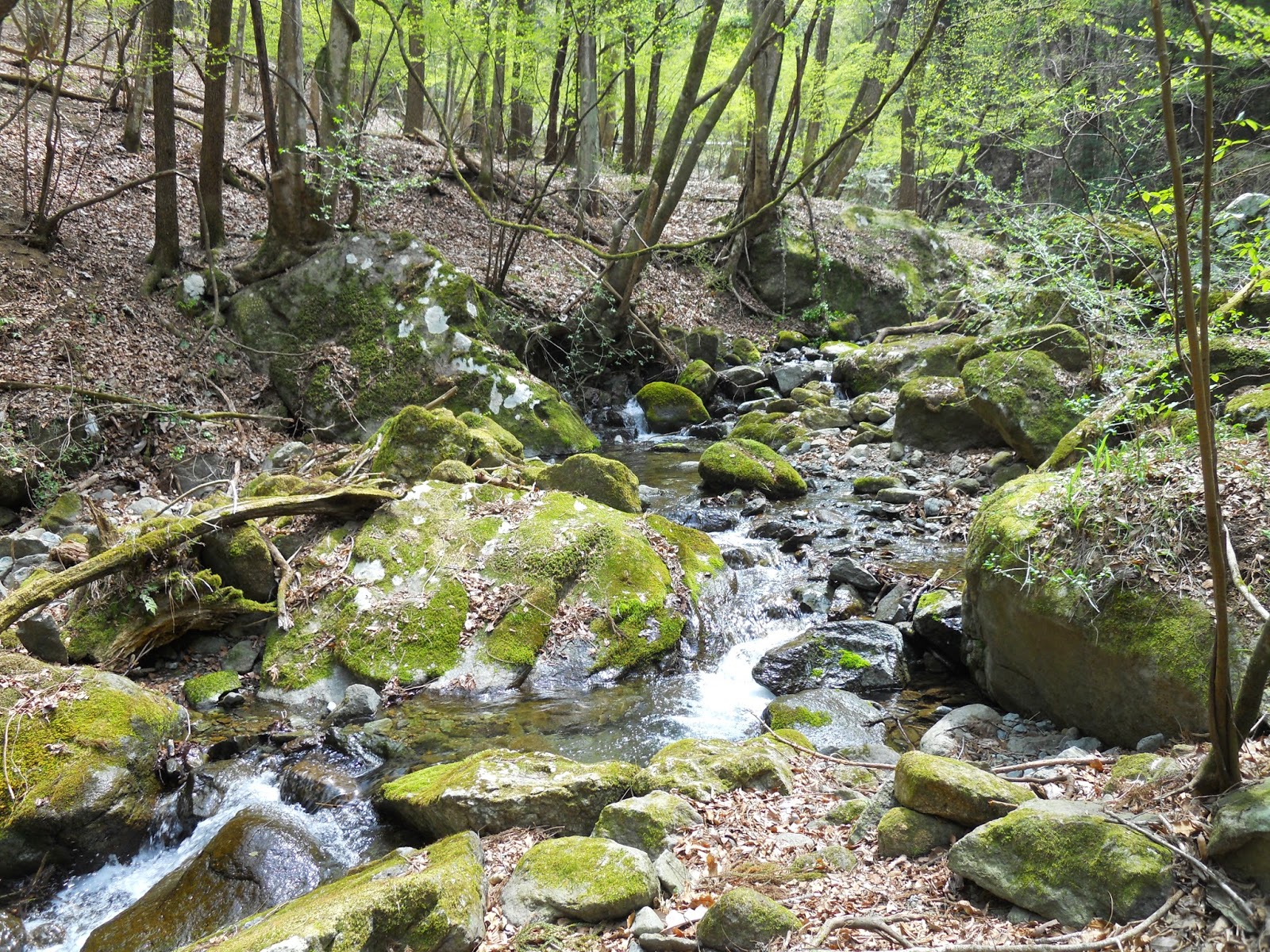 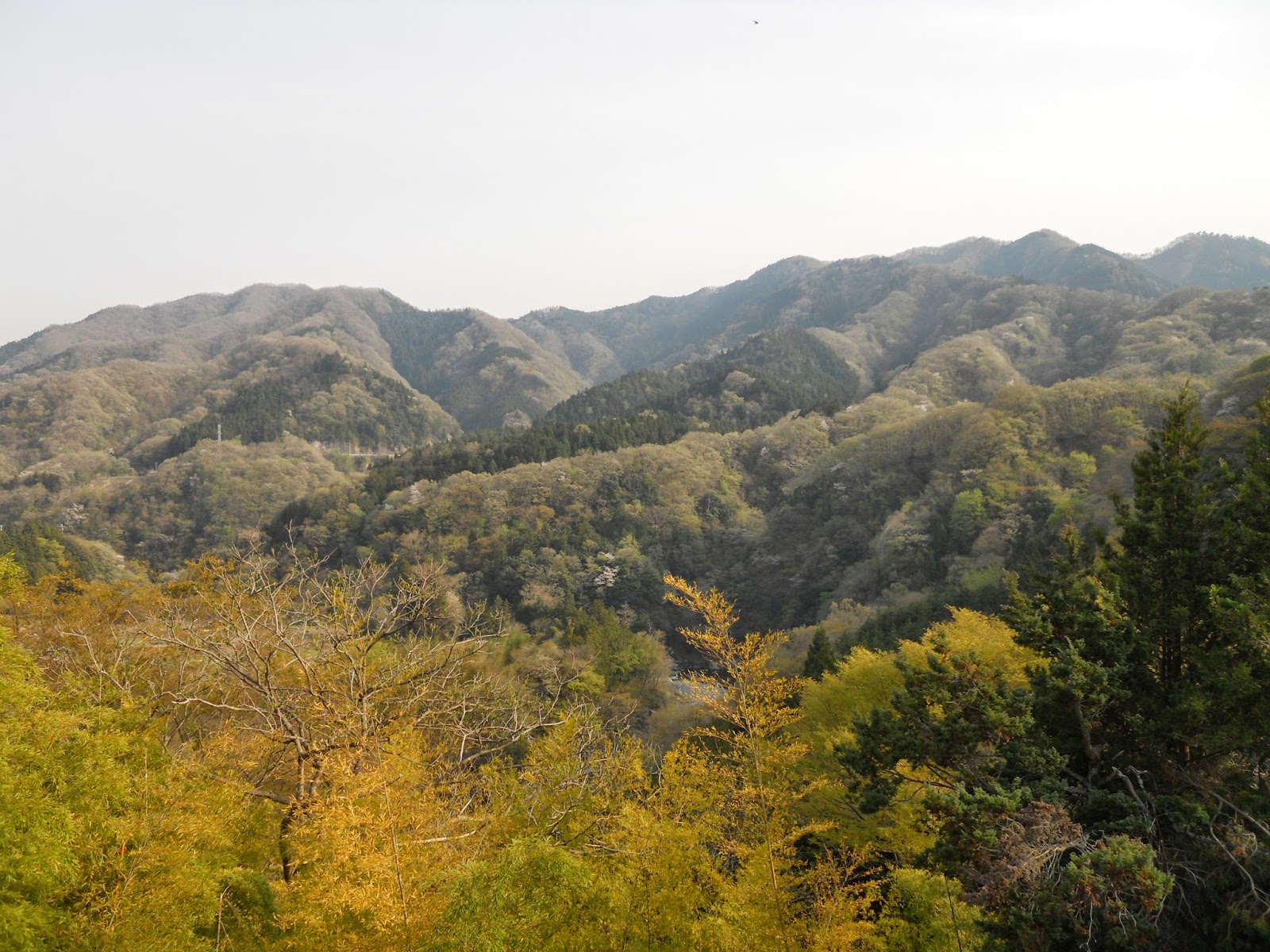 Here is one of those mountains: Kuratake-yama (倉岳山), or “warehouse peak”, in Ōtsuki. This route is a pleasant up-then-down-again exercise, offering a bit of everything: mossy ravines, kept cool and fresh by their running rivers; high forests, a mix of evergreen and deciduous; and rolling ridge paths, with impressive views off both sides through breaks in the trees. On a clear day, expect to reach the peak to find the massive profile of Mt. Fuji right there in your face.

The walk is neither merciless nor long: Mt. Kuratake stands at 990m high, but you get a relaxing 4km of horizontal distance for the climb, and another for the descent, so at no point, save one or two very short bursts, is the steepness particularly brutal. The whole thing can easily be done within 5 hours, and will not trouble anyone in at least reasonable shape.

What makes it fun right now is that the paths have not been serviced since the winter, in which time, it may be observed, tree falls and tons of snow melting off the slopes have carpeted the routes in detritus. This makes for many pleasant occasions of clambering over stuff, and at times the path becomes indistinct, but in essence you simply follow one river valley up to the ridge and the other back down again, so there is no serious risk of getting lost, and the soft ground generally cooperates with your soles. 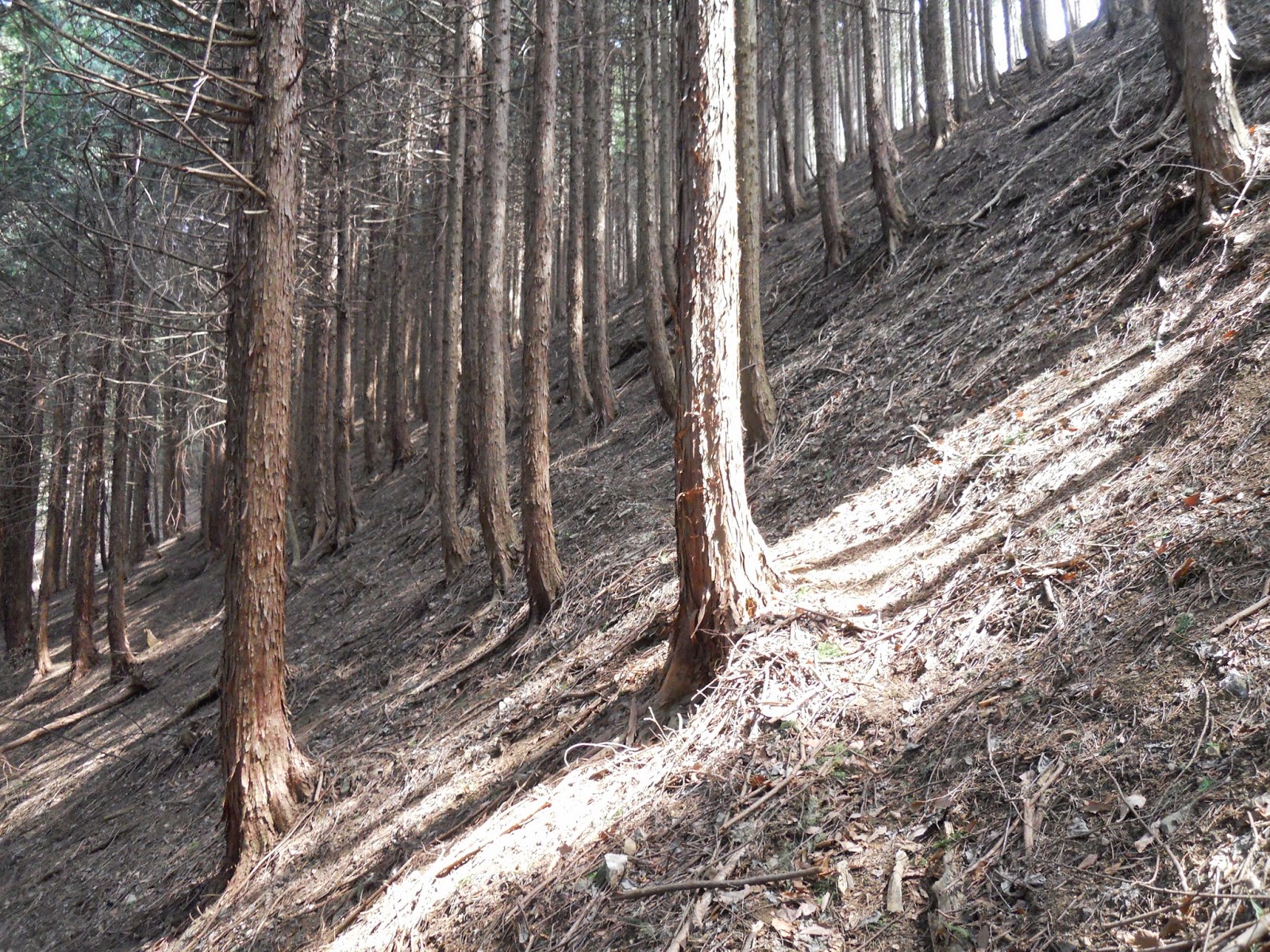 To get there, take the Chūō Line west out of Tokyo – past Tachikawa, past Hachiōji, and past Takao. Once out of Tokyo Metropolis and into Yamanashi, the station you want is just a few stops ahead: Torisawa (鳥沢). The walk starts there, and finishes at Yanakawa station (梁川), the last stop before it. This area can be reached in about 1 hour 30 minutes from central Tokyo.
CLICK HERE FOR FULL ARTICLE
Posted by Chaobang at 08:32 0 comments 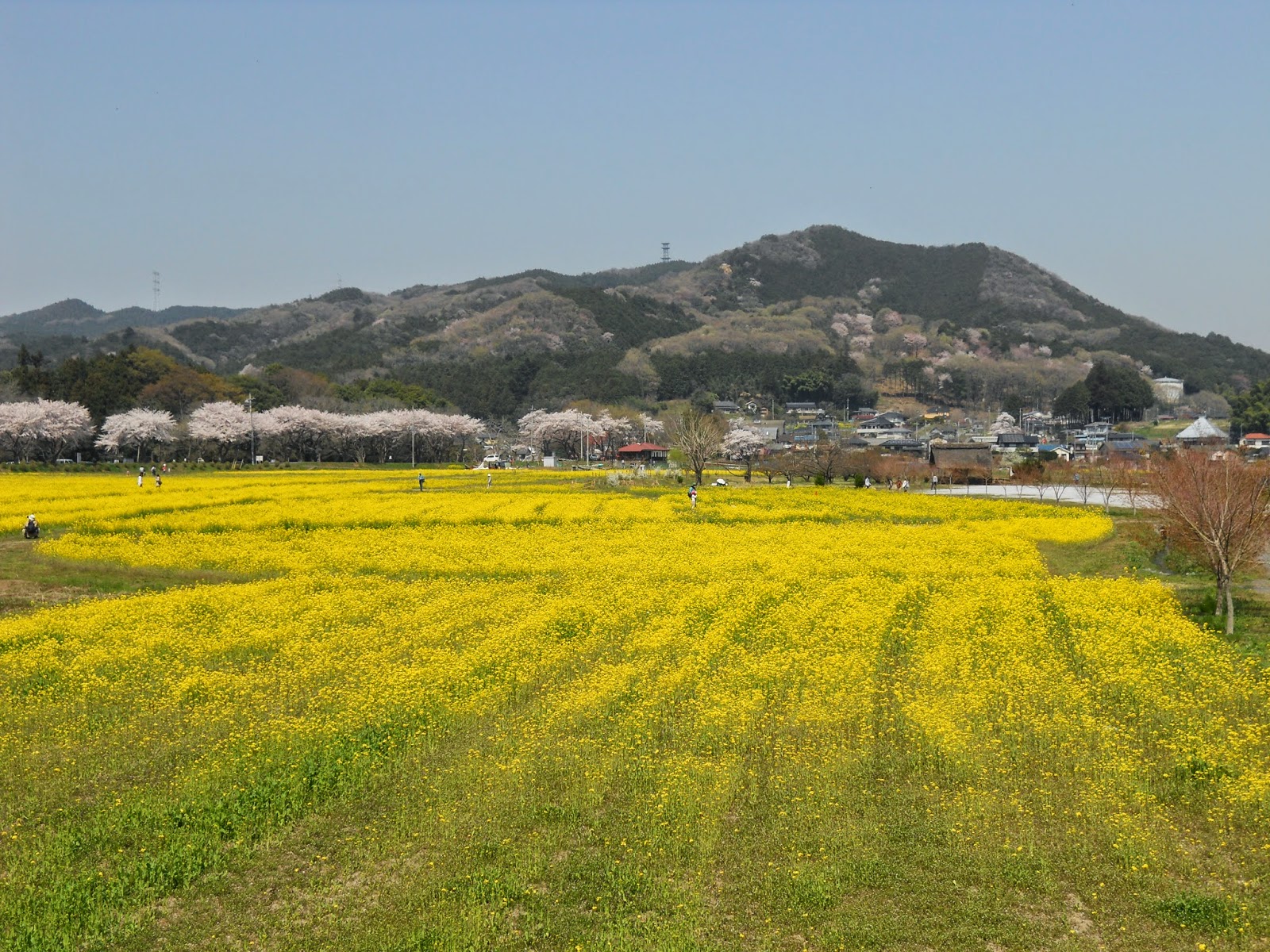 Tokyo's cherry blossom season has come. After the last two weeks the urban sakura has almost run its course, but the blossoms in the mountains lag behind, and now reach their peak.

Many good mountain sakura locations are in easy reach of the capital, and this one coincides with a relatively relaxing hike to its north: up the 305m Mount Hiwada (日和田山), in Hidaka-shi, Saitama Prefecture. Besides its profusion of cherry blossom trees, this route is a lovely blend of scenic views, casual mountain trekking and gorgeous fields of seasonal flowers, with a waterfall thrown in because well why not. 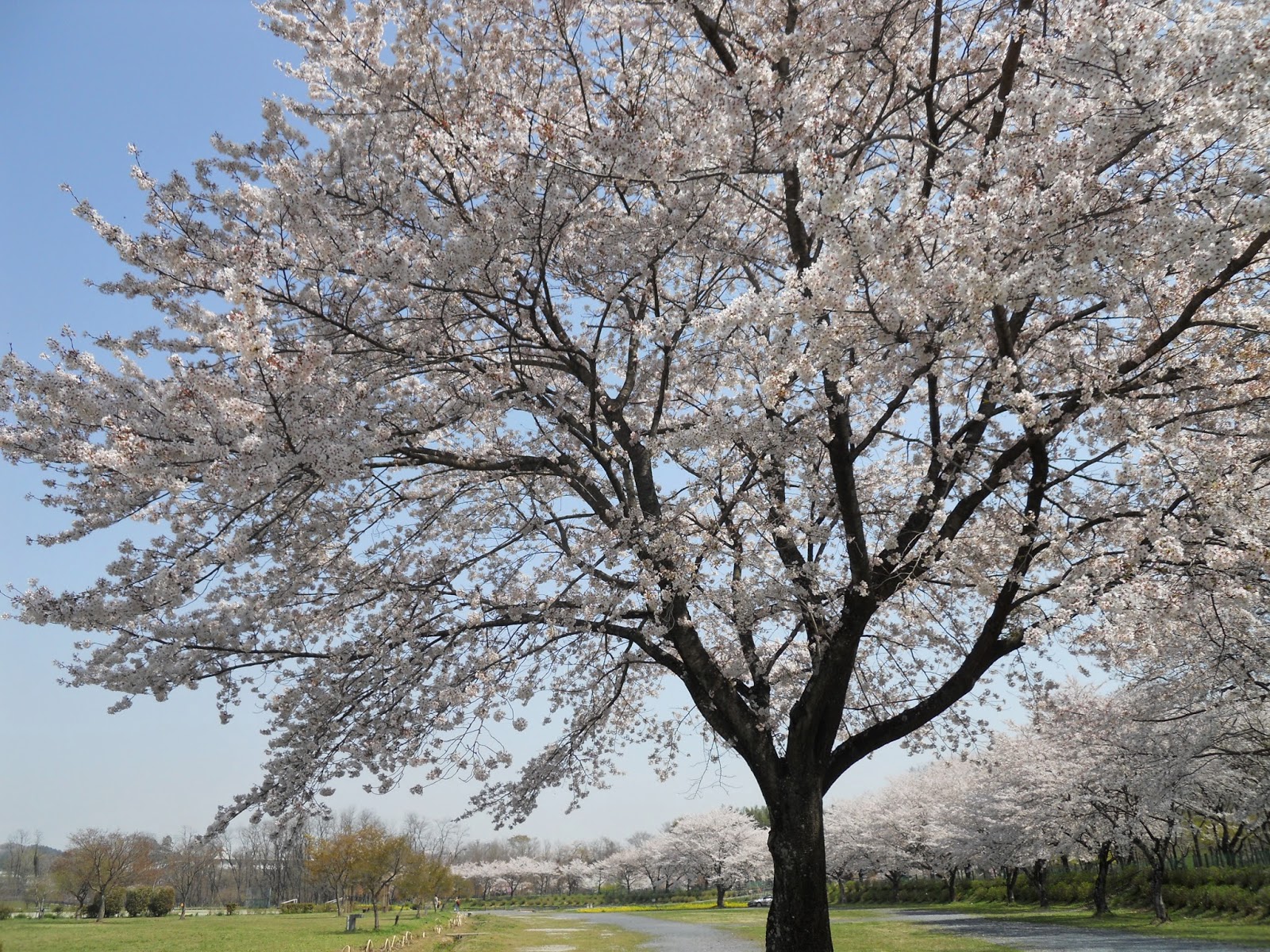 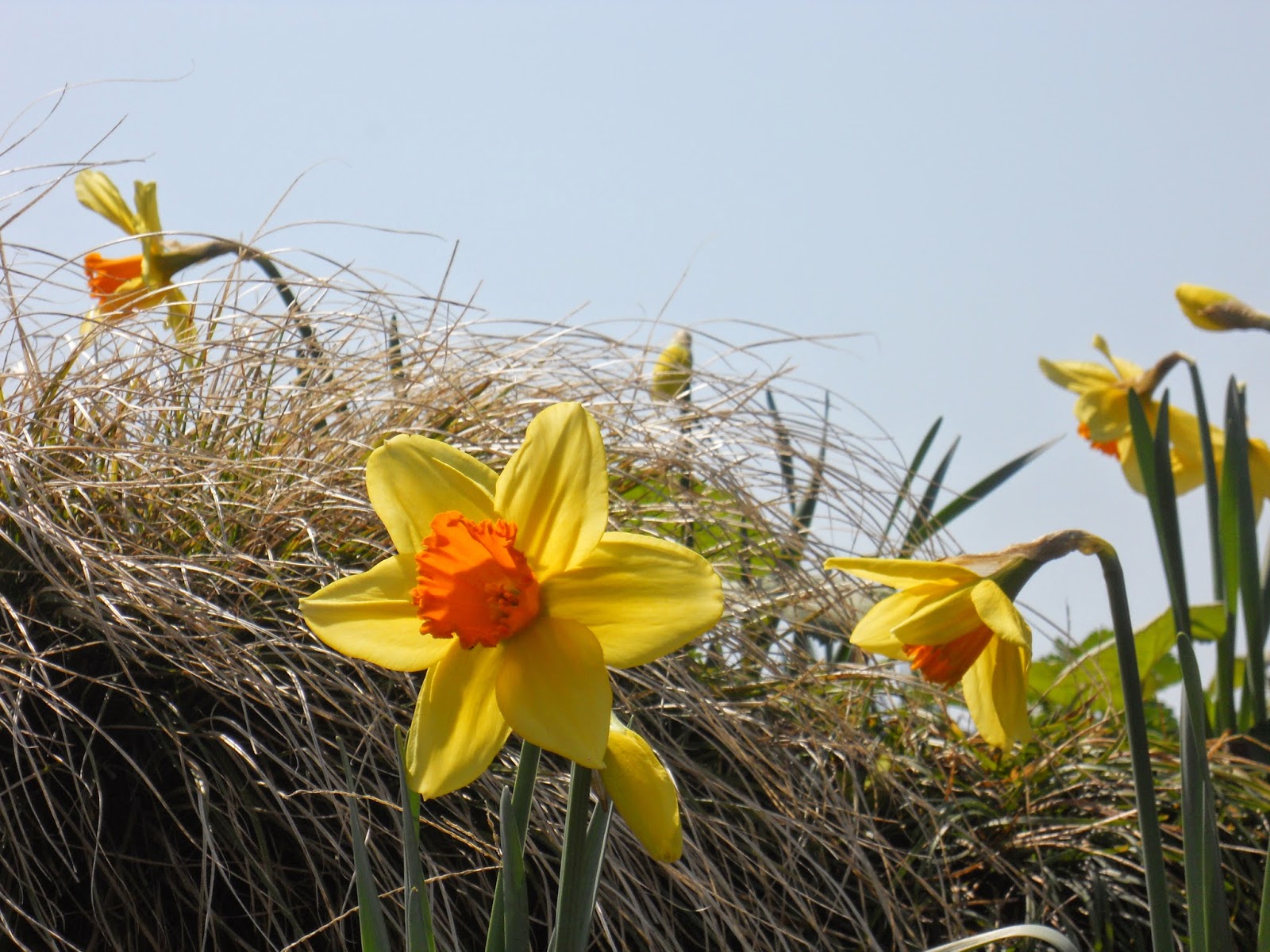 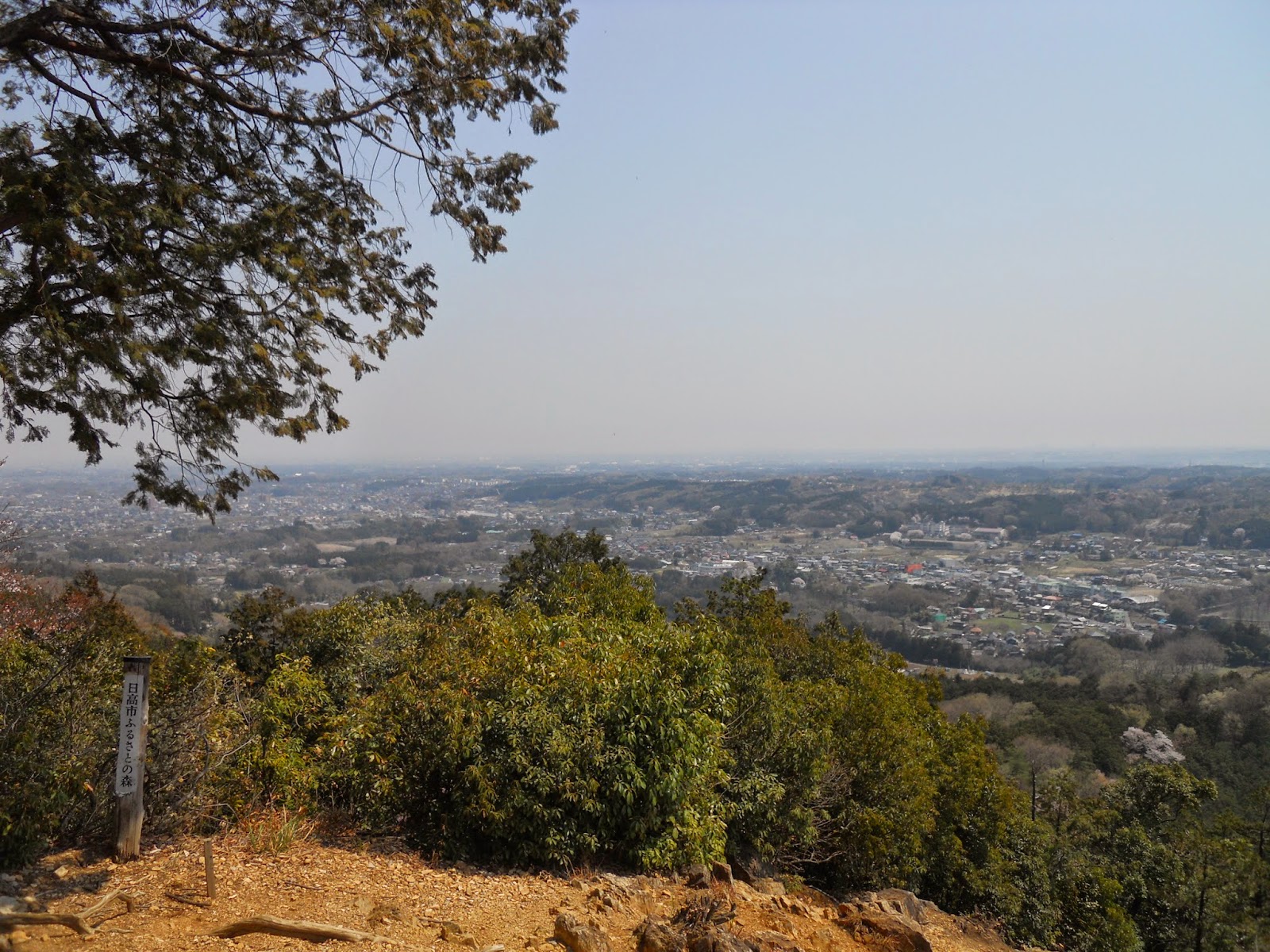 Hiwada-yama overlooks the little town of Koma (高麗), a couple of stations up the Seibu Chichibu Line from Hannō city. There is more to Koma than there appears. Its story begins a millennium and a half ago: not in Musashi, as the region was then, nor in fact in Japan at all, but in Korea. 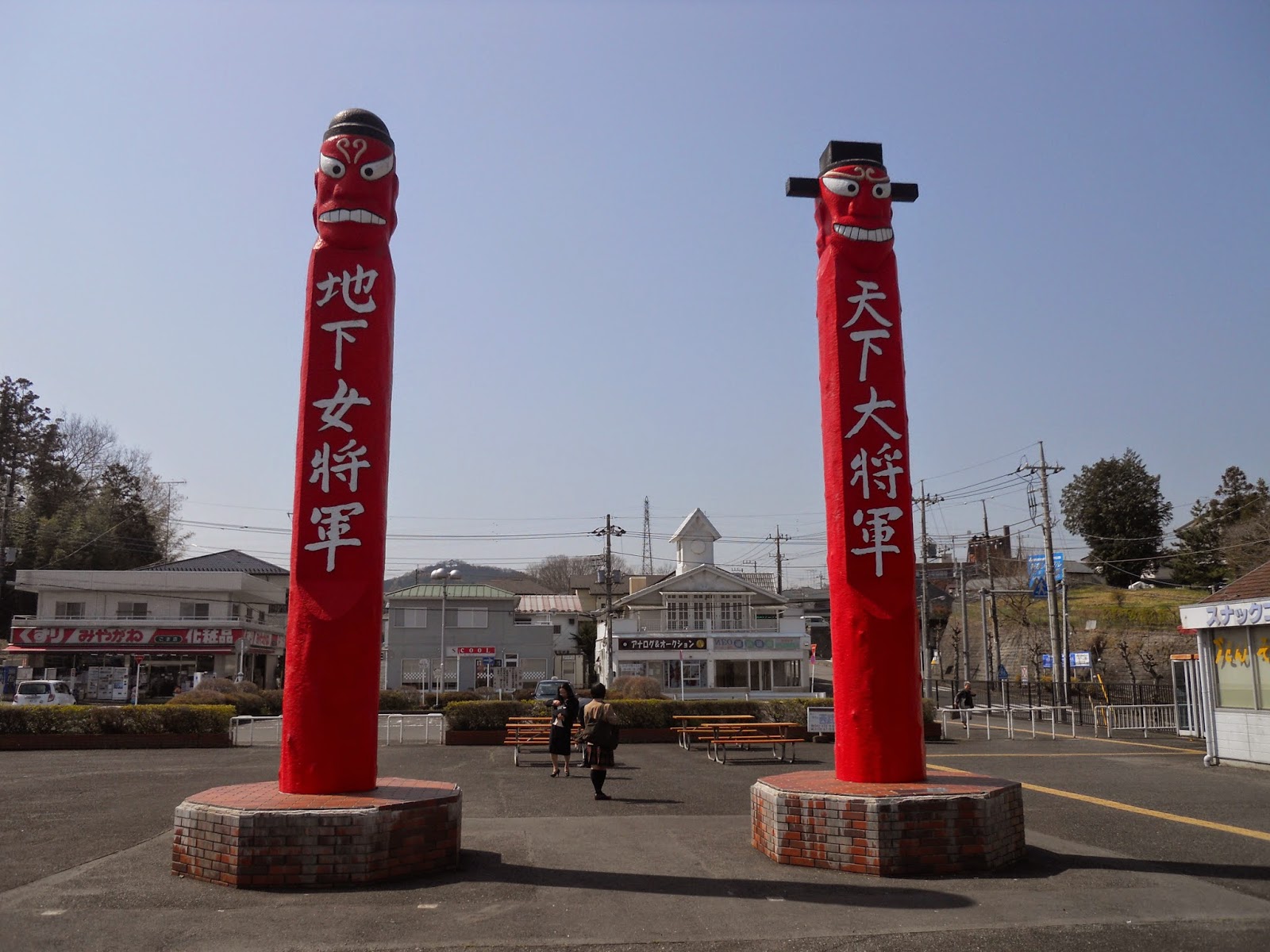 Koma is the Japanese rendition of Goguryeo (고구려): one of three kingdoms on the Korean peninsula from the first century BCE to 668 CE, and the ultimate source of the name Korea in English. It was by far the largest of the three, and controlled parts of what is now northeast China, and some Siberian Tungusic populations, in addition to most of the Korean peninsula itself. The other two kingdoms, Baekje and Silla, neighboured Goguryeo on the peninsula's southwest and southeast corners respectively.

Like the disgraces of too many human societies, these three kingdoms decided, for some unpardonable reason, that they ought to violently compete. Goguryeo ended up in an alliance with Baekje, but Silla developed a relationship with a much more formidable partner. That partner was, of course, China, that ever-present shadow across the long Korean story.

With the help of the Chinese Tang Dynasty, Silla conquered Baekje in 660 CE, then Goguryeo in 668 CE, then turned on the Tang themselves and drove their forces out of the peninsula. This unified Silla would eventually fragment and recombine, becoming superseded by Goryeo; Goryeo in turn lasted until the pressure of Mongol occupation and internal wars broke it down, to be replaced by Joseon. Joseon was what eventually crashed into the twentieth century as the European empires ripped off great chunks of Qing China in their slavering maws, and propelled Japan into a rapid, and ultimately tragic, pursuit of European-style imperialist “modernity”.

In the last hundred years, the Korean destiny has been bound irreparably to the drool of hungering foreign powers; half a century of Japanese occupation was followed by a brutal severing in half by the Cold War blocs. Both halves built themselves up upon cruel and ruthless authoritarianism, but have come to define themselves relative to the world in opposite ways. One half has fully embraced the capitalist madnesses that rampage across humanity. The other has created madnesses of its own by slamming the door on the outside world, and resolving come what may to never rely on anyone else again.

But let's rewind, back to the three kingdoms. When Silla conquered Goguryeo in 668 CE, many of Goguryeo's people fled across the sea to Japan. These immigrants found places to live across what is now the Kantō region, but in 716 the Japanese court established Koma County for them, whereupon almost 2000 of them are recorded as having moved there. One of their royals, by the name of Jakko (잣고), was appointed as Koma's governor, and is celebrated in Koma's heritage as having taken responsibility to construct roads, buildings and industries in what was then mostly wilderness, thereby creating a foundation for Koma's future. Jakko is now enshrined at Koma Shrine, which is overseen, it is claimed, by his direct descendants.

This hiking route can be completed within four hours, and starts with a gentle circuit around a beautiful field of flowers and sakura trees. It then leads up to the top of Mt. Hiwada, Koma's centrepiece, where the best views are in evidence. From there it proceeds along the forested ridge to Monomi-yama (物見山), before winding its way down past the Five Virtues Waterfall (Gojō no taki, 五常ノ滝) to come out at Musashi-Yokote (武蔵横手) station. And if you have time and energy to spare, it is worth closing the triangle with a walk back to Koma along the picturesque Yokote Valley.

To get there, take the Seibu Ikebukuro Line to Hannō – or, if coming from further west, the Hachikō Line to Higashi-Hannō. Then change to the Seibu Chichibu Line, on which it is two or one stops respectively to Koma station. This takes about an hour and a half from central Tokyo.

There is a bit of climbing involved, so good shoes are recommended, but none of it is long or backbreaking. There are plenty of convenience stores and facilities on the way, and the mountains themselves are fairly popular, have occasional houses and public toilets, and are easy to get on and off as needed.

CLICK HERE FOR FULL ARTICLE
Posted by Chaobang at 09:15 0 comments