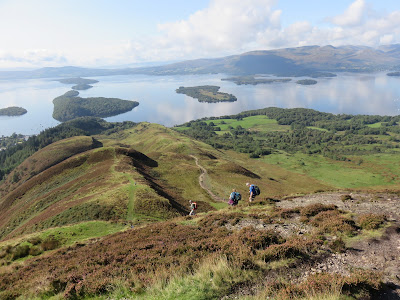 ‘Twas then that we parted, in yon shady glen
On the steep, steep side of Ben Lomond
Where in purple hue
The highland hills we view
An’ the moon comin’ out in the gloaming

So runs the song of Loch Lomond, a traditional Scottish melody whose namesake is often synonymous with Scotland itself. Only fifteen miles north of Glasgow, this crystalline lake is the largest inland body of water in the United Kingdom and marks Scotland’s most significant geological and cultural divide. 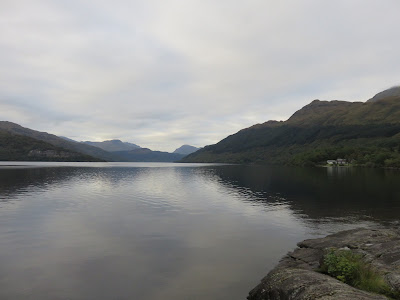 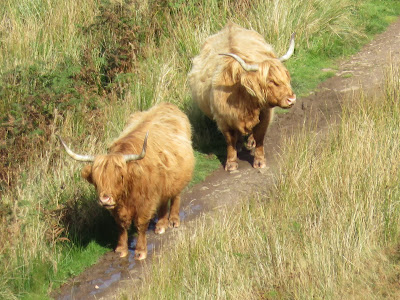 Loch Lomond is both an anchor and a crossroads of identities and historical forces. Its still waters reflect stories of feuding clans and herds of swimming cattle; of islands where ancient monks studied and worshipped in seclusion; of still older, artificial islands that may be some of the oldest land reclamation works in the world; and of course, of that perpetual struggle with Scotland’s foil of a thousand years, the English. 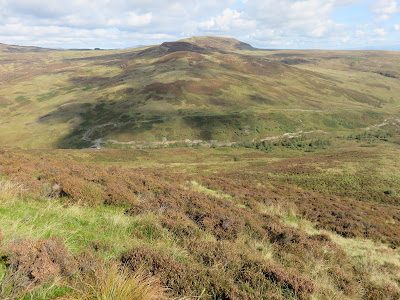 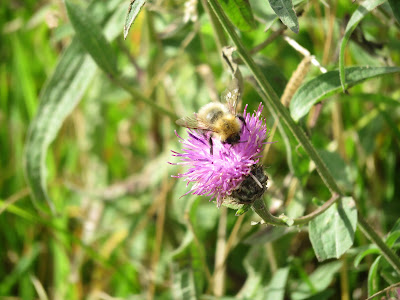 The Two Scotlands
Scotland’s two aspects, Highland and Lowland, are not entirely a human invention but rather date back over 450 million years.

In those distant days the north of Scotland was part of the great continent of Laurentia, along with much of what would become North America. Southern Scotland existed on a separate continent, Avalonia, with the rest of today’s Britain and much of Europe. These two continents collided during the Silurian period, crushing the earth of the two parts of Scotland together and raising mountains which, though now much eroded, once rose high as the Himalayas.
CLICK HERE FOR FULL ARTICLE
Posted by Chaobang at 16:08 4 comments

On the Lamentable Condition of Public Toilets in London 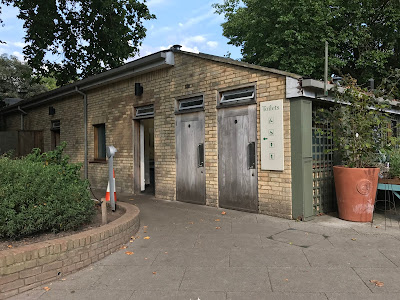 During recent walks in various parts of London, it has come to my notice that this city suffers from a distinct shortage of public toilets. On top of that, where these essential facilities happen to be present, such as in the central parks and major train stations, they almost always charge a significant entry fee. Many also lack stair-free access, while others still are dilapidated or closed altogether from obvious lack of maintenance.

Perhaps my attention is all the more drawn to this problem after five years in Tokyo, a city which for all its flaws is quite respectable on the question of free and accessible public latrines. Almost every station on the city’s rail and metro network has one in at least decent condition, as do the public parks, or if all else fails there is usually a department store or konbini nearby whose facilities you can use without fear or shame. The train station toilets are usually inside the ticket barrier, but even that is preferable to the situation in London where most stations have none at all, and thus the possibility that you will be able to pee after a long London Underground journey is a matter of hit and miss (usually miss).

The Politics of the Disappearance of Public Toilets
On further investigation this deficiency is not a coincidence. Last year (2016) the BBC reported that over 1,782 public toilets had been closed across the UK over the preceding decade. With no legal requirement for local authorities to provide them, they have apparently been one of the first things to go as the austerity movement eats into councils’ budgets.

It is an easy issue to joke about or trivialize – from a place of privilege, say if you travel by car or have private access to toilets in your place of work, and thus take regular relief of your bodily fluids for granted. But as with much of austerity, the greater your level of vulnerability or distance from mainstream norms and expectations, the less of a position you are in to treat this as a laughing matter. Consider for example women, who in general use the facilities to deal with more complex sanitary needs; people with bowel or bladder problems or other physical or mental health concerns which require more frequent recourse to the loo; people in wheelchairs or with otherwise limited mobility, who are often forgotten in the design of the facilities’ spaces; small children and elderly people; transgender people, who face discrimination concerning toilets that recent events in the US have made internationally notorious; and unemployed or homeless people, for whom 50p per use might not be an insignificant blow.

Thus it seems difficult to summarily dismiss the cynical view: that the collapse in public toilet provision in London, and in the UK more widely, is but one more component of the established belief system and political agenda of the day: that society should not exist, that the public sphere should be ruined for private profit, and that life should be made as miserable as possible for those who are vulnerable or seen as different.

Can we imagine a strike directed more perfectly (and literally) below the belt? Perhaps there is no topic on which the distance between privilege and oppression more starkly divides between reflexive, comfortable amusement on the part of those least affected by this problem, and the distress and utter collapse of dignity suffered by those it impacts the most.

Public Toilets as a Human Right and Public Interest
Who could dispute the case for free, accessible and clean public toilets? In the first instance, because our nature as human beings carries with it the frequent imperative to relieve both the greater and lesser calls of nature, the safe and hygienic means to do so should be considered a basic human right, and was as much as recognized as such by the UN General Assembly in 2010.

But even supposing we come at this issue from perspectives that for whatever reason reject human rights, we would be hard-pressed to deny that having this means available is much in the public interest. The thing about the aforementioned imperative to release our waste products is that it is ultimately going to happen anyway whether there is a safe and hygienic place to do it or not, and certain cities around the world whose embarrassment we shall spare here are well familiar with the consequences of failing to cater for it.

However, the prospect of monied, international London joining their ranks might be quite shocking to some. Many of its most overcrowded tourist destinations lack any toilets at all, including Underground stations such as Tower Hill, serving the single most popular attraction in the country, where one account has it that ‘visitors to the Tower brave a filthy concrete tunnel that reeks of urine at night’. Not only does this suggest how we all pay the cost of inadequate latrines in the form of a deeply unhealthy and unpleasant common environment (excepting perhaps those individuals who take a rare prurient interest in the substances in question), but it also perhaps ought to lead Londoners to wonder how many thousands of those visitors later return to, say, Paris or Beijing, to regale friends and families with stories of their experiences whose effect is that the very mention of London is from then on linked in their minds with the stains and odours of human excreta. 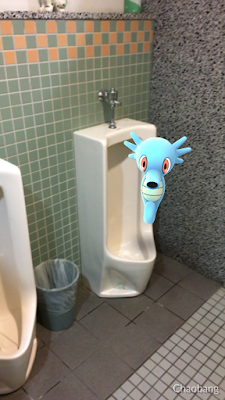 To avoid conflicts about whose responsibility it is to resolve this, perhaps we should all take on a share of it. On the surface it appears simple. On the one hand, a legal requirement should be introduced for local authorities to provide a bare minimum of free, accessible and hygienic public toilets, and the necessary resources be allocated them to do so. On the other, there should also be some manner of legal obligation on businesses and private organizations – restaurants, cafés, pubs, department stores – to offer the facilities, and these should be usable without shame or cost by anyone, regardless of whether or not they be paying customers.

As ever, the real challenge is the politics of this: it is hard to imagine responsibility being accepted either by a government which disdains human rights and the public interest in principle and is ideologically committed to their destruction, or by those businesses which operate to the same belief systems and insist that as businesses they have no obligations whatsoever other than to their own profit. We might predict then that the international image of London will become ever more drenched in urine until a substantial shift away from free-market capitalist culture is achieved, towards more socially responsible paradigms of what it means to be either a government or a business.

In the meantime there seem numerous efforts emerging as frustrated citizens go out of their way to pick up the burdens of these structural failings. Among them, the British Toilet Association has been campaigning for more and better public loos for almost twenty years, while researchers at the Royal College of Art have published both a design guide for publicly accessible toilets (very clear and illustrated, well worth a look) and a ‘Great British Public Toilet Map’, an open-data project which attempts to chart locations and information about public toilets in the UK. Also commendable are those local authorities and businesses which really have been making an effort: certain train stations which used to charge a fee for using the toilet, such as Victoria and Fenchurch Street, have now scrapped it and allow free access for anyone, while councils and businesses in some areas together operate Community Toilet Schemes by which the public can use the toilets on the premises of any of their participants.

This still falls short of the standard expectable of a global centre like London of course, but perhaps not all is lost. Once the more general free-market abolition of society has been reversed, these existing civic movements could become a valuable launchpad for the restoration of a public toilet network worthy of a respectable city. 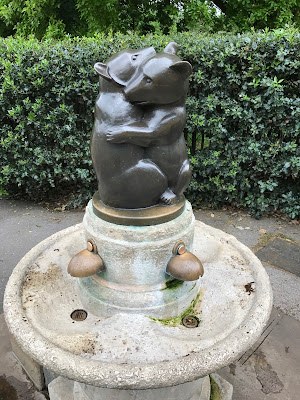