The Tokyo police, for the second time this year, have arrested a Japanese citizen, Megumi Igarashi, for expressing her plans to build a kayak modelled on her own vagina – or, as the official parlance refers to it, 'three-dimensional obscene data'. 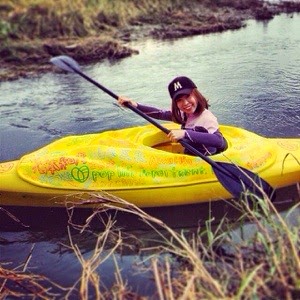 Read that again, if you please. Three-dimensional obscene data.

No, I don't have a clue what that means either.

Let's try to unpack this a bit. Recall, if you will, that “obscenity” comes from the Latin obscenitas, meaning “impurity”, “immorality”, or “filthiness”.

Its evokes dirtiness; pollution; immorality. It carries a strong emotive charge of hatred and disgust, a roar to punish and forbid. It is that most sinister of things: a taboo. It does not describe its object, but rather projects on it a repulsive odour, such that we assume that it is to be taken for granted as foul without even bothering to think about it, and that anyone who thinks otherwise shares in its foulness.

Make no mistake. “Filth” is rarely an inherent quality of the object being described. It is more often a stain produced by the describer and splashed upon something he or she wishes to damage.

This makes it a concept less fitting, perhaps, to the realms of informed and sober reasoning, such as legislation – which is why it is all the more disturbing that any society should have ever seen fit to give it a place in its lawbooks. It is a subjective, not objective, judgement, measured not by harmful outcomes but by the tastes, instincts, prejudices and political interests of the person or society judging. It has nothing to do with the public good, and everything to do with that great shipwreck we humans call morality, which has proven a far less seaworthy vessel than that of Igarashi-san's design.

Take a few moments to think about what you consider immoral. Did you come to the conclusion that those things are immoral by yourself, in a way that satisfies your own critical reasoning, your emotions, your curiosity, and your concern for others? Or are you afraid of something that might happen if you think differently?

Any morality grounded in force and fear is no morality at all. It is slavery.

Humanity must correct its mistakes regarding obscenity. It must drop the arrogance by which for hundreds of years it has upheld systems of torture, murder and abusive power relations which it then has the gall to call morality. These concepts are only valuable if they relates to tangible, demonstrable outcomes of harm to human beings or the world around us.

Igarashi-san makes exactly this case on her website, and further contends that while vaginas are uncompromisingly subject to taboo in Japan, penises, by contrast, are not. I have personally encountered evidence for the latter and documented it here. “Obscenity” thereby takes on an aspect of gendered discrimination, which magnifies the gravity of the problem many times over. This is mirrored, incidentally, by the unpardonable Euro-American terror at the female breast, whose consequences have included breastfeeding mothers being harassed, abused, or expelled from public premises.

So what is obscene?

For a start, the idea that parts of our bodies are obscene, is obscene. Obscenity laws are obscene. Censorship is obscene. Coercion is obscene. Political control over art is obscene. Sex-negativity – the notion that sex and sexuality carry a negative moral charge – is obscene. Moral panic is obscene. Gendered and heteronormative prejudice is obscene. The use of taboos to socially control people's bodies, especially women's bodies, is obscene. And cultural, ideological, political or religious forces which advocate sex-negativity and the persecution of those who challenge it, are obscene to the highest pinnacles of wickedness.

Because all these things here identified as obscene, have an unambiguous historical record of generating, promoting, or coming associated with all forms of tyranny, conflict, social division and the most terrible atrocities in all societies in the world, past and present. They are things that bad or mad societies do. They are inherently villainous practices, because they hurt people. And we can all recognise them as such because we can all study and observe their roles in our collective heritage of crimes against humanity.

Now what does it say about us, when we are happy to entertain these terrors whose cruelties have bled and subjected people in a thousand civilisations, but tremble at the sight of a kayak?

Perhaps the answer is straightforward. We do not have tentacles – as far as I know, and perhaps excepting some individuals in the UK Treasury – but we do have vaginas and penises. By coercively controlling our discussion and expression regarding these, society attempts to exert power over our bodies; to set the terms and the narratives of our sexual journeys. In other words, all sexual censorship is by definition political censorship.

Or, maybe that overestimates their intelligence. Maybe they are seriously just that terrified of sexuality, and so they spout and swing legislation around in the way that we instinctively scream or flail our arms wildly when in panic. In truth it is probably a combination of both, but either motivation is beneath us as a species.

So long as obscenity, as a concept, remains hijacked by social and political forces disgusted by sexuality and intent on controlling our bodies, it is a meaningless idea, a nothing wielded as a tool of wanton repression. Until we take it back, all laws based on obscenity are illegitimate, and all moral judgements that invoke obscenity are immoral. Our obligation is not to respect them, but to tear them down, and by all means necessary ensure their perfidious architects never construct such nightmares again.

Our bodies are ours, not theirs. Our bodies are our vessels for our journeys through a beautiful universe, and there is nothing obscene about them or any aspect of them. Hurl the hijackers overboard and bail out the bile of their broken moralising judgements. Tell them that we will have our bodies back. Tell them, to their faces: Get. Off. My. Ship.
Posted by Chaobang at 07:13