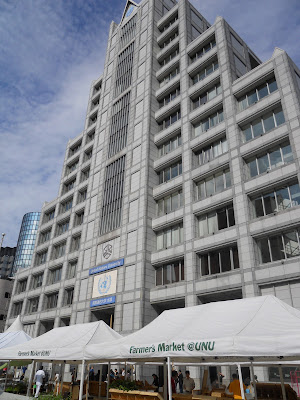 Six weeks of it are not enough to reach conclusions, but so far, this has been a rewarding setting.
The UN University's approach is problem-focused and multidisciplinary: indeed, makes much of the inadequacy of our traditional approach (of segregating our knowledge into a million neatly-labeled but insular boxes) for solving the world's problems. This is good.
In this month and a half, we Masters students have completed two out of the four core courses that make up the foundations of the Sustainability, Development and Peace degree programme: Global Change and Sustainability (i.e. our screwups in our relationship with the Earth), and International Peace and Security (i.e. our screwups in our relationships with each other). Neither have sought to paper over the depressive scale and depth of the mistakes we have made, the horrors we have wrought. Yet concurrently, both have considered the many courageous and admirable steps which humans worldwide dare take to drag us out from the pit. Recognition of both is essential; so this, too, is good.
I have a high impression thus far of the faculty. Most importantly of all, the professors are human: typically with perceptible ethical compasses, and easy approachability. The student-professor hierarchical barrier which often imposes itself in national universities, and in some cases becomes an obnoxious end in itself, has not been an issue here at all. (Though that is not to say there is a shortage of ethical, approachable professors of high integrity in national universities: you know who you are!) As yet, and bearing in mind my limited exposure thus far, I find it hard to envisage the UNU partaking in other dodgy categories of things either. That, too, is good.


And the courses are engaging. Their content is rigorous and topical; and where it might not be, it becomes made so by the incisive scrutiny of students each of diverse and eventful journeys from across the globe, who know what matters to them and have more than enough guts to assert it. This is refreshing: in too much of the world, including Britian, learning becomes about obeying the established and regurgitating their canons, rather than thinking and making original arguments for yourself (and think how much this has devastated fields like International Relations, with so few ready to challenge even the most preposterous of nonsenses!).


Occasionally one senses a bit of content imbalance; for example, not enough attention to climate change mitigation (i.e. rich countries bothering about reducing GHG emissions), relative to the large attention to adaptation (i.e. poor countries putting up with being hit hardest by climate disasters they did the least to create). But for courses in a continuous and active process of growth and improvement, such things are forgivable. The courses themselves are on a journey, and it will be interesting to watch their evolution in the coming years.


What I have yet to learn, pending feedback on my main compositions thus far, is whether my perspective on the world's problems has a practical place, and if so, then in what direction that might lie. Here as everywhere I bear the dissonance produced in Britain, which led me at times to question my humanity. Still do the flames rage beneath about chasms which cannot be bridged, doors which once opened never close. Still gnaw that society's twisted judgements of why, conclusions of absolute certainty, and still do they echo, so insufferable as to take on sentience of their own and hunt for every slightest possible resonance.


Perhaps it must always be so. I recall my recent acquaintance with Systems Theory. Inputs go in, and the system transforms them into Outputs. Inputs may be controllable, or partially so. But what if that box in the middle, the System where they transform, runs not on logic but on things which cannot be defined in words? If madness is sanity and sanity madness, who would know? Outputs at times can bear little relation to what you're doing with the Inputs.


I become aware that my approach might seem unorthodox. Some say idealistic, for good or for ill, although I dispute the accuracy of that term, because issues of how we define ourselves as humanity have real, outright practical consequences for how and whether we solve our problems. Nor do I accept that nature or reality in this world are as straightforward as we like to think. How much traction will the wheels of this vehicle of pursuit find on the roads of the United Nations? We shall see.


Oh, and they gave us free UN University mugs. Isn't that nice? 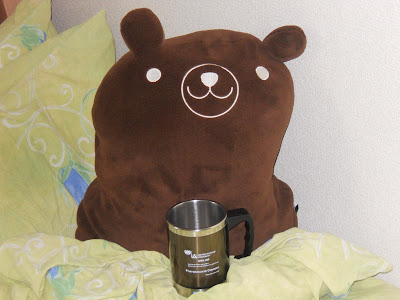 In fact, the outings and thematic excursions have been a marvellous experience – especially in a country perhaps more challenging than most, financially and socially, to outsiders who seek to explore its secrets. For this great credit is due to the IC Secretariat, and partner organizations, for all their hard work in arranging these events.


Of course, this is not a path one treads lightly. It was with shock that I learnt on the opening day that we twelve students were the successful candidates from a international applicant pool of several hundred. I wish no advantage that comes to another person's detriment, so the thought oftentimes weighs heavy. This route is one of obligation: and as such, I am committed to make full use of whatever opportunities exist in this unfolding chapter to drive forth my exploration of what has gone so fundamentally wrong in our world, and to uproot its founts.


The question is not of idealism and reality. It is of how to repair a reality utterly fractured.
Posted by Chaobang at 03:02