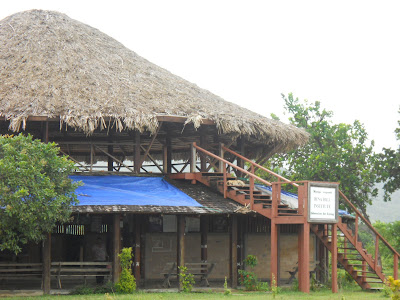 See also:
Reflections on Guyana (19 August 2011)
The Bina Hill Institute was my place of work for six remarkable weeks in 2010. It featured in my previous Guyana reflections, but is special enough to deserve its own attention.
Bina Hill is in the middle of the North Rupununi region – which like many of Guyana's regions, is named after the great river on which it depends. The North Rupununi, in the country's southern interior, is where Guyana's great mass of rainforest opens out onto the savanna. The Annai District spreads out over this region: most of its villages, including Bina Hill and Annai itself, are on the savanna, although some (such as Surama) are closer to or partially within the rainforest. Most of the human population are indigenous Makushi, though recent decades have seen the arrival of people from other indigenous groups, coastal Guyana, or (occasionally) from abroad.
Map courtesy of Rockview Lodge, Annai, at which I must give a shout out to my distinguished and venerable friend Colin Edwards, founder and director of Rockview, who has accomplished tremendous things in the region. 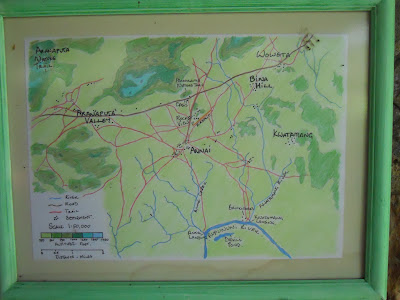 The Bina Hill Institute grew from the vision of Sydney Allicock, former Toshao (chief) of Annai and Chairman of the North Rupununi District Development Board (NRDDB). It is, among other things, a secondary-level school which seeks to teach and train indigenous children in their great challenges of their era, such that they may go on to take leadership roles and steer their communities through quite possibly the most decisive chapter of their journey.
This is reflected in the subjects taught: along with core instruction in Maths and English (the focus of my own tenure there), students learn natural resources management, forestry, wildlife management, agriculture, IT, and business and leadership skills. The Institute compound also serves as a major logistical hub in the region, comprising the NRDDB headquarters, the broadcasting station and tower for Radio Paiwomak – the region's community radio service – and the North Rupununi's tourism offices. 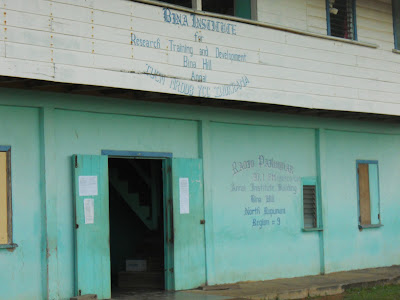 The teaching experience was immensely fulfilling, and I still hope that I made contributions at least approaching proportionality to the impressions I received. One of these was that my class of some thirty indigenous young ladies and gentlemen demonstrated curiosity, eagerness, attentiveness and a genuine desire to learn: quite a contrast to the madness that has descended in Britain's combusting relationship between adult and youth generations, especially in schools (for which on the whole, adults must bear the onus and revise their attitudes). I am sure these students would testify that some of the tasks and themes I put before them, drawing on the histories of faraway countries or the global decolonization discourse, were challenging in the extreme – yet their eagerness to get to grips to them, their earnest effort to master the realms through which their paths led, earned my respect a thousand times over. 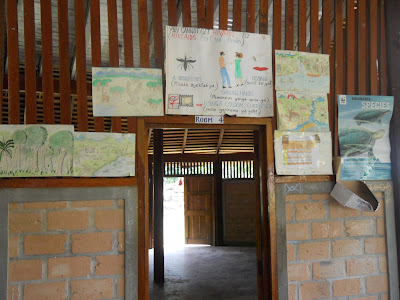 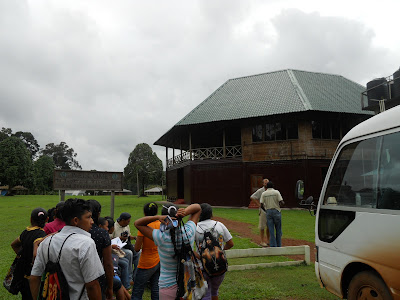 Of course, this work also gave me routes into the life of these communities more generally. A prominent institution thereof was football, the dominant sport in the region (perhaps attributable to the closeness to Brazil) and in which the North Rupununi villages compete in a fully sophisticated and structured league system. This comprises male and female leagues, both of which receive equal attention and weight in the system: a refreshing sight, considering how in Britain (with all its rhetoric on being a "developed country") football is an unashamedly patriarchal affair. This is but one of many regards in which the North Rupununi can be considered more "developed" than much of the world that actually thinks itself "developed", including the UK.
Bina Hill fielded a team in the female league while I was there, and it was a pleasure and a privilege to attend their weekly matches in the villages of Yakarinta, Aranaputa and Annai. They did incredibly well that season too! 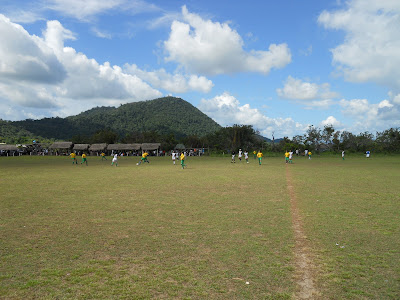 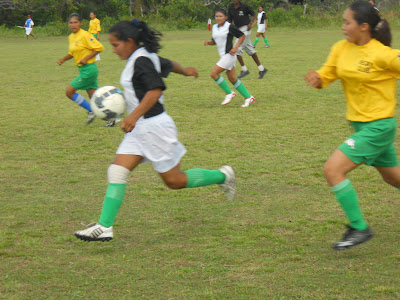 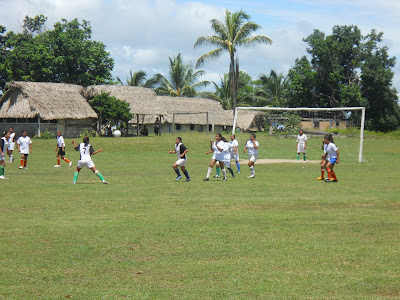 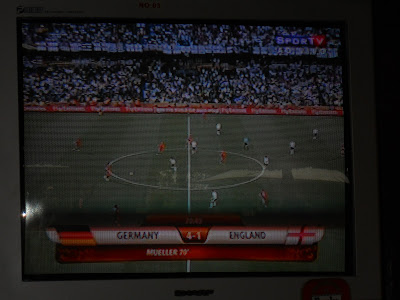 Indeed, for all the colossal challenges they face, the North Rupununi communities represent something more downright human than those parts of the world so proud of themselves as the apparent pinnacle of human progress. We don't need reminding that our species faces a colossal sustainability crisis: and surpassing it requires that we look again at what we are, what we have chosen to be, in relation to each other and the world we live in. The Makushi retain a much stronger and healthier sense of these relationships than we of societies where greed, self-interest and falsehood has sundered those bonds: the very societies which brought about the sustainability crisis, against which communities like the North Rupununi are right at the forefront. 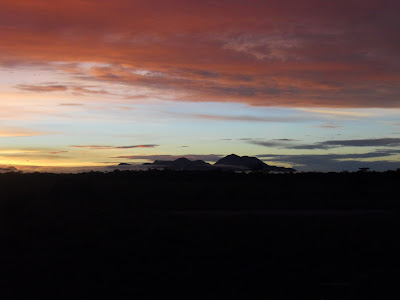 The Bina Hill Institute is an essential part of the communities' efforts to rise to this challenge: and in doing so, to maintain their cultural heritage and identity from which all success will come. The Institute's role in this mission, and the importance of the mission itself, is huger than any of us can imagine: for its implications are not only for the people of the North Rupununi, but for all of humanity. In the indigenous communities of Guyana, we have tangible examples, real examples, that human society can on balance be a good thing; that failure and conflict are not inevitable miseries that must afflict everything we attempt; and that we do have what it takes to live in mutual interdependence with our world, and with each other: that we can do better than the flawed political, social and economic models of which we are so proud. These indigenous identities are identities humanity cannot afford to lose. 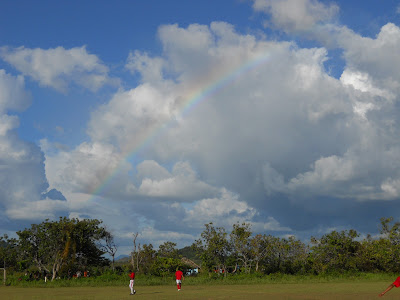 So now, over a year since my tenure at the Institute came to a close, I must take this chance to express respect, admiration and gratitute to those I met and worked alongside. First and foremost, the headmistress, Patricia Fredericks, and the incredible effort she has personally invested into the Institute's success; and my colleagues and friends among the teaching staff: Quiency Hinds, Bertie Xavier, Indranee Roopsind, and especially the late Captain Mike Haskell – may he find every success and excitement in whatever new realms he now continues his explorations. Likewise I acknowledge and thank the administrative and support staff: Vincent Henry, Ivor Marslow, Debbie Jacobus, Grace Albert, Alphonso Forde and all the others. Most of all I raise my hat to Sydney Allicock himself, the living meaning of inspiration, without whom I might never have had the chance to so much as glimpse Guyana's interior; and likewise to the students I had the pleasure to teach, the Bina Hill Institute class of 2010, who must surely continue to work hard in pursuit of their dreams. My parting words to those students were that although I had the privilege of teaching them today, tomorrow it will be they who must teach the world. So now, from the opposite side of the planet, I would present the world the other side of this formula: that the world must be ready to learn. Humanity as it has become is not equipped to overcome the sustainability challenge, nor to deserve to. Unless our kind redefines itself, recovers some collective sanity, it will not. And here are people who can show us how to do something about it. 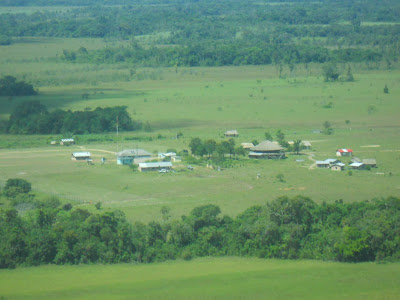