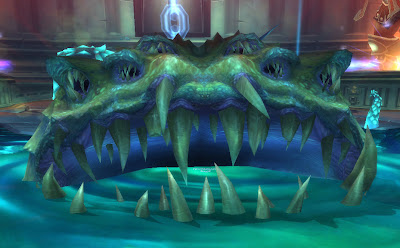 'Your petty quarrels only make me stronger!' - Yogg-Saron (World of Warcraft)


a) Global Change and Sustainability;
b) Peace and Security;
c) International Cooperation and Development.


Quite sensibly, it attempts to integrate these approaches: highlighting that the problems are not separate fields but rather interconected challenges to humanity, and so interconnected must the solutions also be.


Condensed, these problems – sustainability, peace, development – are as follows:
a) We wreck our world;
b) We wreck each other;
c) And we conduct our journey in such a way that not only permits this, but establishes it as natural.


"We" here indicates humanity's "prevailing tide". These problems are far from absolute, and in each of our lands we can likely identify people or communities who actually do rather well. Nonetheless, humanity on Earth is now in a crisis on all of these fronts.


Some of the problems we have created are unthinkable in the vast scope of their impacts, such as anthropogenic climate change or the Holocene Extinction Event – yes, the geological-scale destruction of the Earth's biosphere we are single-handedly creating. Some more of the problems are unthinkable in the depth of their sheer depravity: genocide; the drive to dominate others; gender; bigotries like racism or homophobia – of course these are a select few facets of a comprehensive calamity. Many, or most, defy explanation; represent twisted logic, broken sanity; cannot, and should not, be able to exist in the universe.


Human Nature?
Let's think for a moment how we got here. Human nature is something we can all argue all day about until the argument reduces to back-and-forth accusations of idealism or pessimism; but all we need here are the obvious basics. Two relationships define us from the opening to the present:
a) With the Earth: All of us, literally, are made of matter and energy from our planet and its star. They form the only system presently available for us to live in.
b) With each other: We are social animals, with reason and emotion as pillars. Whatever else, we can identify other human beings as somehow like ourselves; and we can rationalize, or empathize, a baseline of commonality, however limited it might be, between their experience of the world and our own.


Rationality is one of our most contentious concepts today, but from just these starting points, it's surely not controversial to conceive that it has an objective core, accessible to optimists and pessimists alike:
-We are supposed to look after the world we have, because if we ruin it, there is nowhere else we can live; and/or because we might care about it for its own sake.
-We are supposed to not harm one another, both because we can think and feel that it is wrong, through identifying with the impacts; and/or because we otherwise drive others to harm ourselves – and that also ruins us as a whole.


Derailed?
So take the universe as it began. The formation of our solar system. The first emergence of life on Earth. And at some point, the emergence of humanity.


Then take the situation now. A humanity that has established unthinking, unfeeling self-aggrandisement as its dominant paradigm, and annihilates itself and its geo-ecological context all the while knowing and protesting to itself that it is not supposed to. A prevailing direction, by which we turn on all that the story of our world has built over millennia – and devour it. If all this is nature, then it is as though nature is committing suicide.


My question is this. Is it conceivable, that in the universe's trajectory from whenever it started to the present time, nature alone could give rise to this situation?


Is nature inherently self-destructive? For the more scientific among you: can reality tend, innately and by way of its normal functioning, to its own unravelling? For the more spiritual: does an artist spend a lifetime constructing a beautiful work, and then – through the same mindset – consign it all to the flames?


What is the answer to that question? Reality balances order and chaos, but every consequence has a cause. Though empirical analysis may fail at the level at which we are looking here – simpy because none of us have eyes quite that big – my gut sense, and the best conclusion I can manage in these mortal circumstances, is No.


Breaking the Universe
The scale is alarming enough. The depth is scarier still.


It is the character of problems, not only their extent, that really provokes.
-Prejudices: nationalist, ethnic, spiritual, against apperances or behavioural traits, or against non-majority sexual orientations. Anyone who's encountered any of these prejudices can attest to the sheer power of hatred, of the unreasoning will to destruction, infused within them. Hatred, we might remind ourselves, of things either of no inherent harm to anybody or completely invented anyway. The tyranny of Normal. Where does this come from? It harms everyone it touches, benefits no-one. And yet it is powerful in every land.
-Gender: The scrawling of a line between male and female, equals who share in common humanity and individual diversity – both things way more tangible than mere difference in sex. The blasting in of grave imbalance, and pitting of the two against each other in a bitter conflict for social dominance, as though male and female were irreconcilable races from different dimensions. And they establish this as normal – as natural. Once more, all are made miserable – male and female – and nobody benefits. What could give rise to this?
-Violence to the Defenceless: The deliberate killing of noncombatants in war. Capital punishment. Rape, in all its manifestations. Torture. Things for which in most societies there are those who would either make pretexts, or defend as necessary, or natural, or inevitable, but for which none can hide the true driver: that people are doing these things because they enjoy it. To take pleasure from inflicting unspeakable suffering on others; to feel good about oneself in doing so; and in so doing, to disintegrate the humanity which gives society its reason to exist.


And this is without even beginning with politics and war. Legalism, the Curse of Qin Shihuang with which the Chinese journey has struggled for two thousand years, and in the CCP era continues to do so. The horror and hubris of Europe's colonialism, unfettered capitalism and wilful ordering of itself in such a way directly conducive to the two twentieth-century human cataclysms – not a fraction of this madness can be evoked on a page. The post-colonial calamities of Africa, and the sanity-defying carnage of some of those conflicts – and for those who hold to a linear view of development, who still remembers the relative peace and prosperity of that trade hub called Mogadishu a few hundred years back? The descent of the Balkans into the unstoppable hatreds of the last twenty years – for when national, ethnic and spiritual diversity does not in itself set us against each other, from where could come such intensity of will to bloodthirst that we saw in those conflicts?


Such things are not only tragic. They are also suspicious.


So again: is this the way things were logically meant to happen? Is this natural? Or did something go wrong?


Corruption
As one human being contemplating humanity's situation, I cannot conceive of this as a natural outcome. Through reason or emotion, order or chaos, some of the things we have chosen to wreak on this planet come across as simply too broken to be natural. What is sanity in a world of madness? Problems are one thing; but the scale and depth of what we are looking at here penetrate to another level, beyond "problems".


And there is another reason I arrive at this thought. Consider humanity going on like this, indefinitely. Consider the implications if it is nature. The scenario that, despite our species's bravest efforts, there might always be callously-conducted wars, always be rape, always be bigotries that strike death into innocent souls in service of hatred for hatred's sake – and so on.
Compare the ethicality or desirability of that, with another scenario: human extinction.
Horrible; yet also the end of that brokenness, guaranteeting thereafter that the universe, or at least this part of it, will be free from us.
Evidently, not a pleasant comparison. Not a choice anyone should have to make – to me at least, these two are equally terrible, or if anything the former is worse. Yet if the brokenness is not nature, or at least not predominantly nature, it may be fixed: it offers the realistic hope that humanity may one day be free of its worst nightmares.


Not all its nightmares. Black and white idealism? There's a difference between nightmares you can wake up from – as one is meant to – and nightmares that saddle you permanently.


Not nature, but Corruption. Corruption as a term for whatever it is that might have gone wrong. What is Corruption? I have no bloody idea.


It could be anything, really. The universe is not small; and who knows the scale of whatever might be outside even that. Humanity observes and reaches conclusions about reality from an inconceivably microscopic position in space and time; there is far more we have yet to learn than we already have.


Something going wrong suggests agency. Brokenness might connote a breaker. What kind of breaker? A few of you reading this will recognize the creature whose thousand maws I opened this post with – and a few more might be aware of the creative tradition which inspired it. Do we want to know? Could we handle it if we did?


Yes, we could. We would have to. We are already handling its consequences and striving against them despite their soul-shattering twistedness. But for now, how do we locate what drives it? Whatever Corruption is, it must be found, and uprooted.


Deep stuff. But the easy act of dismissing the madness of humankind as simply our nature, as many of our traditions of thought seem so sure of, comes across as at best premature, at worst pernicious. We want better. We are capable of better. And we will only do better with a recognition that the disasters we've wrought over recent centuries and millennia – our lack of sustainability, our rejection of peace, and our distorted development – are neither the logical nor inherent direction of our journey, but a breakdown of it.
Posted by Chaobang at 12:49