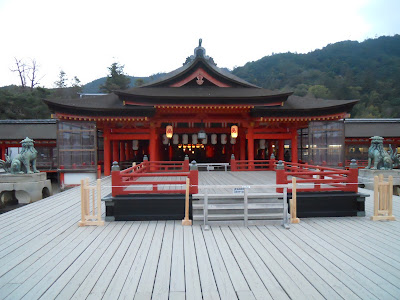 Ten minutes across Hiroshima harbour lies the island of Itsukushima, or Miyajima as it is better known. We spent most of our first full day in Hiroshima exploring its town and holy peak, Mount Misen, the latter requiring an ascent up a trail which someone had decided, for reasons unfathomable, to saddle with stairs from one end to the other. 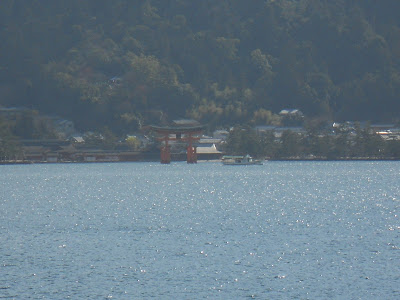 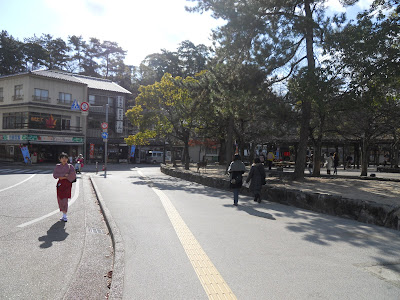 The island has been considered sacred in the Shinto tradition for over a thousand years, with births, deaths and bloodshed still prohibited upon it. In the centre of town stands the Itsukushima Shrine, a UNESCO World Heritage Site housing multiple officially-designated National Treasures, as well as "that" torii which rises up from the water, except at low tide when the waves recede and visitors can walk under it and, if that is their thing, stick coins between the barnacles that live on its pillars. Click below for visual aids and more. 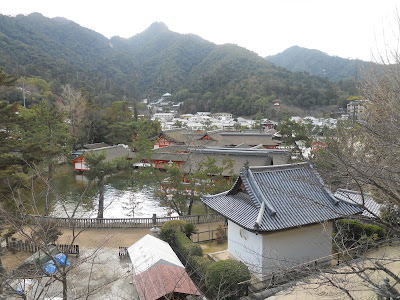 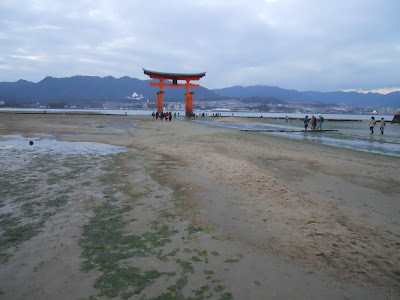 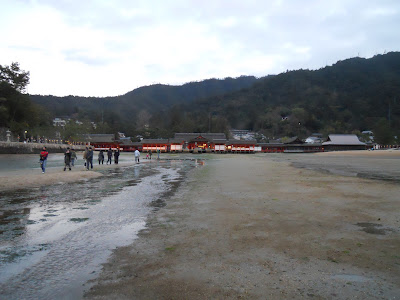 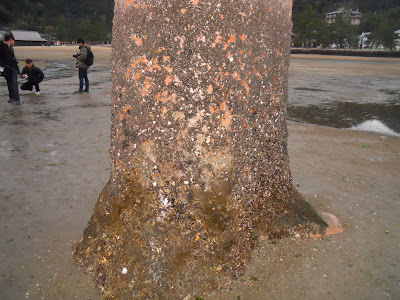 The town treads that challenging line between peaceful seclusion and touristy bustle, with perhaps surprising success given the status of the torii at high tide as one of Japan's "Three Most Scenic Places". Tranquility prevails, especially when you wander up from the thoroughfares into the narrow alleyways and surrounding nature trails. Some gratitude may be due on this note to these friendly characters, who share the streets with humans in freedom, or come up to you and nose in your bag in search of munchable material like passports and ferry tickets... 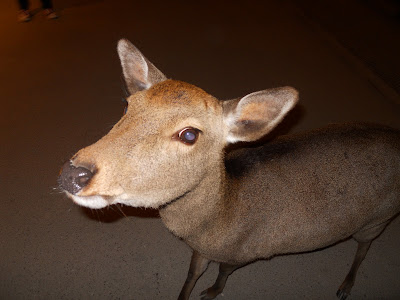 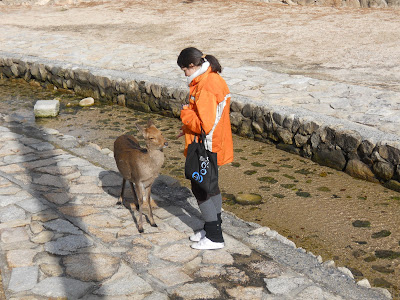 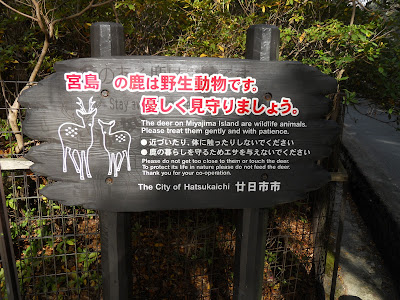 The town has plenty of other sights too. Spot the venerable Winnie-the-Pooh-sensei, perhaps serving part-time as a local guardian deity... 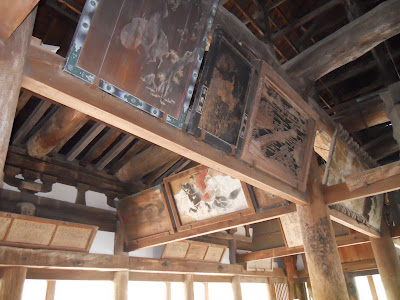 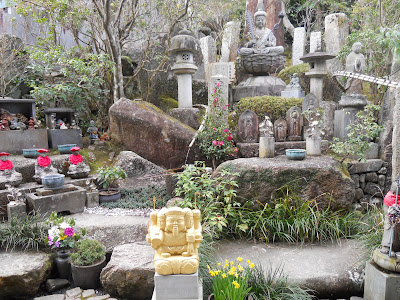 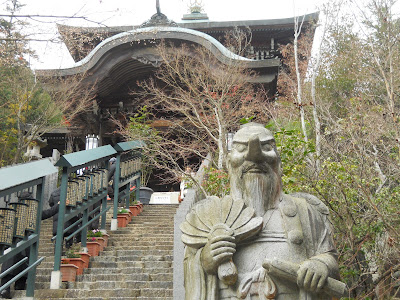 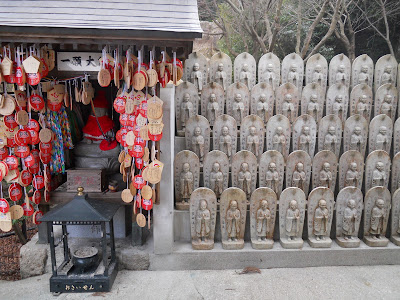 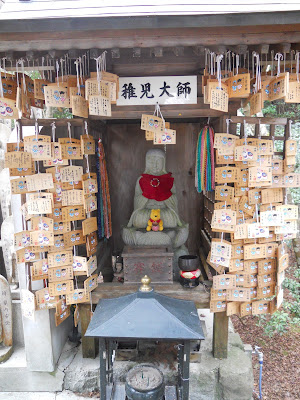 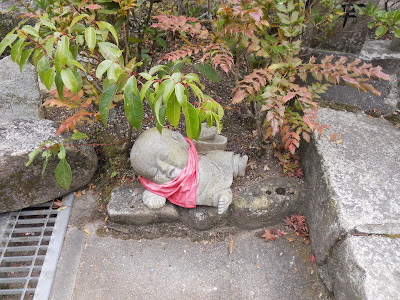 And the mountain offers stairs, stairs, more stairs, and its fair share of nice views and other curiousities. 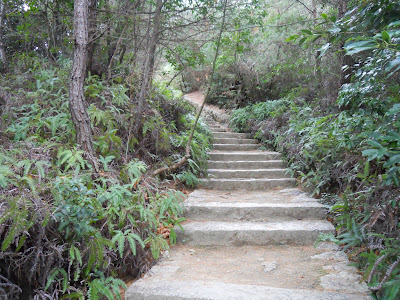 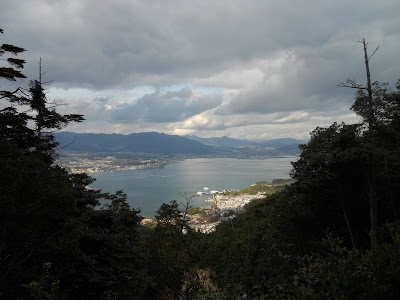 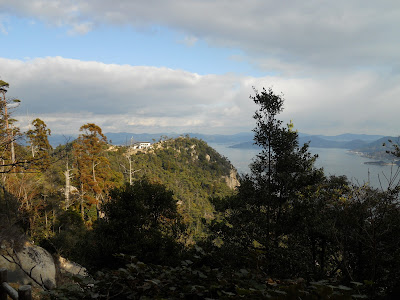 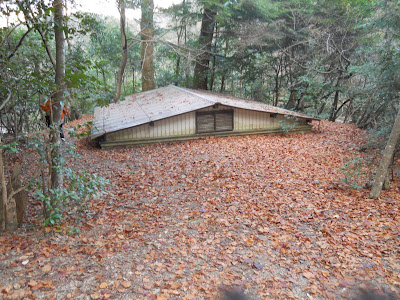 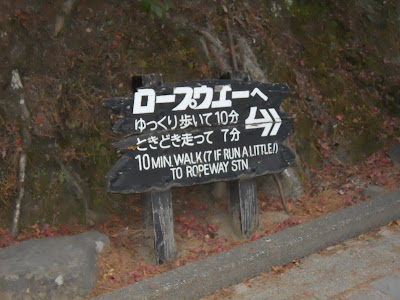 Back in Hiroshima proper, we had the pleasure of encountering another of its eminent qualities: okonomiyaki, or "grilled as-you-like-it", a pancake-like food heaped with layer upon layer of practically whatever the heck you want in the way of meat, fish, vegetables, or miscellaneous Japanese unidentifiables. Hiroshima is the centre of its region's distinctive okonomiyaki style, and as such our discovery of it took place in three floors of a building packed with about thirty mini-restaurants, each conjuring forth endless rows of this delicacy. If you're ever in the area, drop by the Okonomi-mura at the east end of the Hondōri and take your chances – rewards are likely with any outcome. 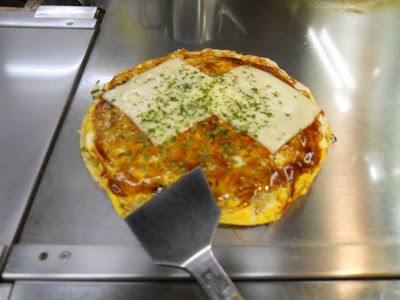 Next, the final entry for Hiroshima. Take a guess as to what it's about.
Posted by Chaobang at 14:44