A World Without Gender 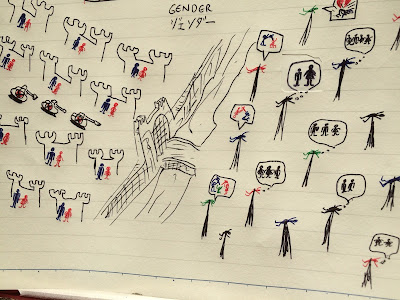 Can you imagine a world without gender?

No masculine. No feminine.
We do not need them. We are one hundred billion, not two.
For men are from Earth and women are from Earth
And so too all those not men or women.
A world where to be one sex or the other means absolutely whatever you want it to mean.
A world of actual people.
Can you imagine it?

A world where women and men are equal
For your sex says nothing about your power.
Thus, the power of women restored to the legends, the media, the books, the films, the games
To the workplaces, where there are no “men's jobs” or “women's jobs”
To the parliaments and politburos
To the laboratories, boardrooms, courtrooms, bedrooms and sports fields
As well as to everywhere else.
Everywhere else.
No longer female objects to male subjects
Rather, subjects all.
A world which looks up to women. Can you imagine it?

A world where we are not ashamed of our own sexuality;
Break free of the stigmas, tricks and taboos that tar it with filth.
When shall we cease to cower at our own damn body parts?
For sex is not dirty. Coercion, censorship – these are dirty.
So let us speak of it! Free, informed, constructive
Not with tittering panic, but logic, magic and rigorous dignity.
A world where to be a sexual being is a wonderful thing. Can you imagine it?

And while we are at it, a world where we no longer serve that terrible myth, that such a thing exists as Normal sexuality
Nor cast out or punish those who do not fit it
But recognize instead that all sexualities are different
And that this, too, is a wonderful thing.
Where we cease to insist that there is one way for male sexuality, another for female sexuality
Nor impose a single standard of beauty upon us all
But rather understand that it is okay for women to be big, or men to be small
Or women to be strong, or men to be weak
Or men to love men, women to love women, three to love three, four four, five five
And that none of these is better or worse, more right or more wrong than all of the others;
That wrong is not what is different, but what hurts.
A world at peace with its beautiful diversity. Can you imagine it?

A world where affairs of the heart are free of competition and strife: not a battlefield, not a market, but a realm of joy to which none shall be barred from entry
None left to cry alone
None left un-hugged.
A world where societies do not expect diverse human beings to live under fixed, rigid systems
But nurture all possible arrangements of love and family
So that all might live true to their own hearts and minds.
A world where the power of love, of those who wish to be together, is supreme
To never be split by the guns and laws of nations, nor the fists and blades of dogmas or interests
And where love is love: not a point-scoring contest, not a tool of status or gain, not a test of conformity to masculine and feminine standards which do not exist
But a true concern and devotion to fellow persons born of the stars.
A world where tribulations bring us closer, not drive us apart
And where at last, for goodness's sake, we drop the lie that nastiness and cruelty is in the nature of these things
And understand that love does not hurt; only societies that fail at love hurt;
That there are no star-crossed lovers, only society-crossed lovers.
A world of love. Can you imagine it?

And yes, a world with no rape. No sexual violence.
A world where we understand that force has no basis, no place, in our sexual nature
And never has, and never will.
For these abominations are born not of flesh, but of that meaningless conflict of female and male
Of masculines and feminines:
Nothings we invented from nowhere.
Instead, a world where we can no longer conceive
For one to know pleasure from the carnal agony of another
Nor see our bodies reduced to objects.
No, not only a world where rape does not exist
A world where it cannot exist
For so long as it does exit, the human race prostrates itself in disgrace before the universe.
No more. No more. A world of sexual peace. Can you imagine it?

That is a world without gender. Can you imagine it?

Break now from the mountains of bone and blood in which these madnesses have buried us
For madnesses they are, horrors, hells, and nature birthed none of them.
All, we created.
All, we must un-create.
Do not dare, human, to call it Idealism
For that is a label spoken by cowards, monsters and fools.
You fiends, you fiends, you are born of the stars! Why then do you not love?
Enough, enough, go and get back your love!
Will you build a world free of gender?
Or will gender build a world free of you?
Posted by Chaobang at 10:37