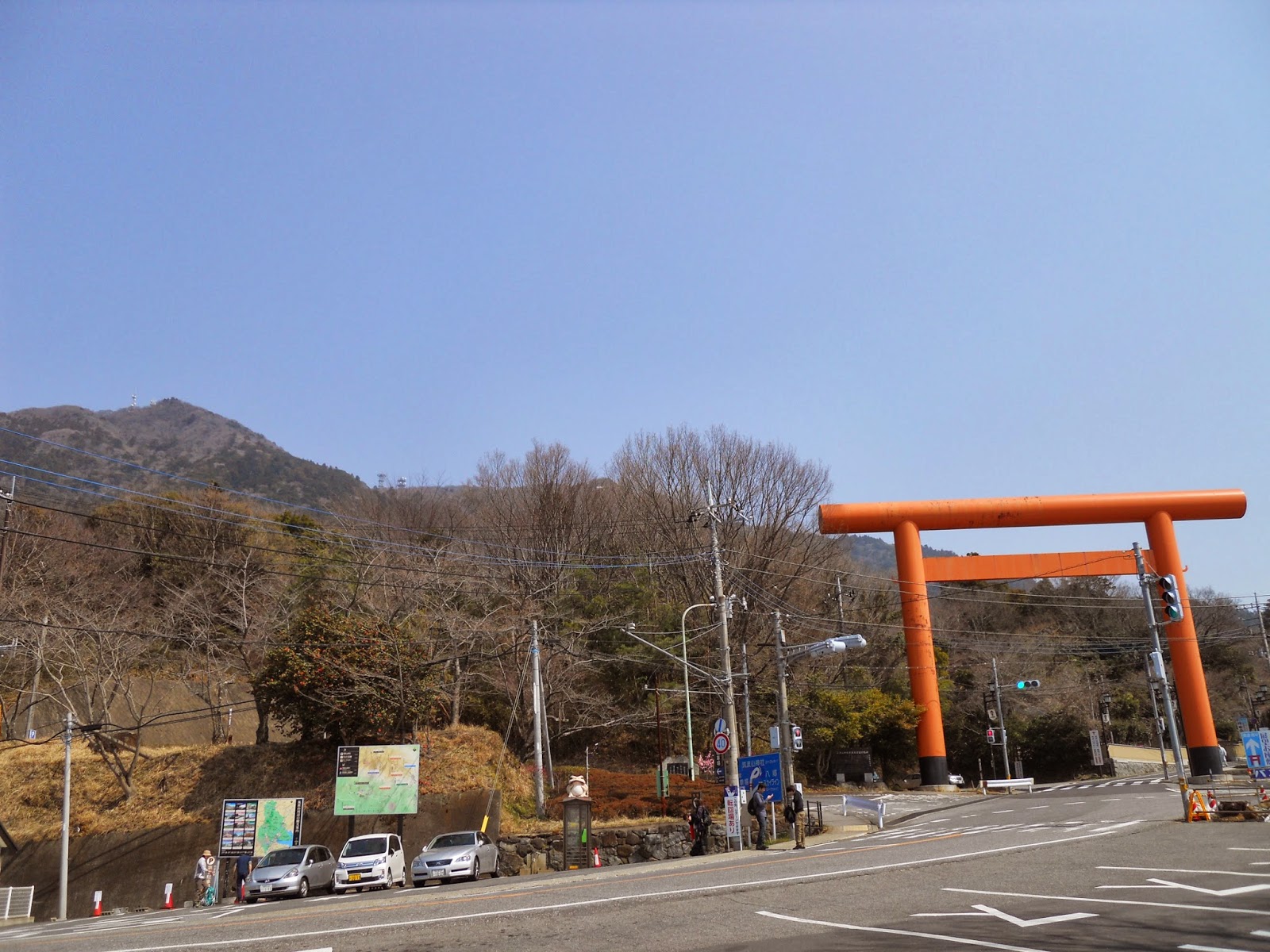 On a clear day, look out from a high vantage point in Tokyo, such as Tokyo Tower or the Skytree. To the west the mountains ring the horizon, a reminder that everything here, even this urban infinity, subsists at the pleasure of Japan's volcanic geology. At one extreme, Mount Fuji watches on in its silent vigil. Towards the other, the imposing ice-capped spine of Honshu rears redoubtable in the background.

East towards the sea, however, everything is flat. There is scarcely a hill to be seen. But there is one exception: a conspicuous double-mountain to the northeast, all the more peculiar for how it has that skyline all to itself.

It is Mount Tsukuba (筑波山) – one of the 100 Famous Japanese Mountains. The principal mountain in the flat southern half of Ibaraki Prefecture, it overlooks the “Science City” of Tsukuba, a 1960s planned concern devoted to scientific research and discovery which houses the prominent University of Tsukuba, as well as an Annex of the National Archives of Japan.

Mount Tsukuba has two peaks: Nantai-san (男体山, “male body mountain”), at 871m high, and Nyotai-san (女体山, “female body mountain”), the rightfully taller at 877m. A sacred mountain, the peaks are respectively associated with Izanagi and Izanami, the ancient Shinto deities who mythologically birthed Japan's islands, gods and people. The Tsukuba Shrine at the mountain's base is one of the oldest in Japan; people have been coming there to worship the mountain for 1,300 years.

Tsukuba-san is notably not volcanic. It is composed mostly of granite, and features many large boulders and rock formations for which it is famous, each bearing its own resemblances or stories. The best-known of these is the “Toad Rock”, whose apparent likeness has given Tsukuba-san a permanent cultural association with toads now profusely represented in its installations and merchandise. 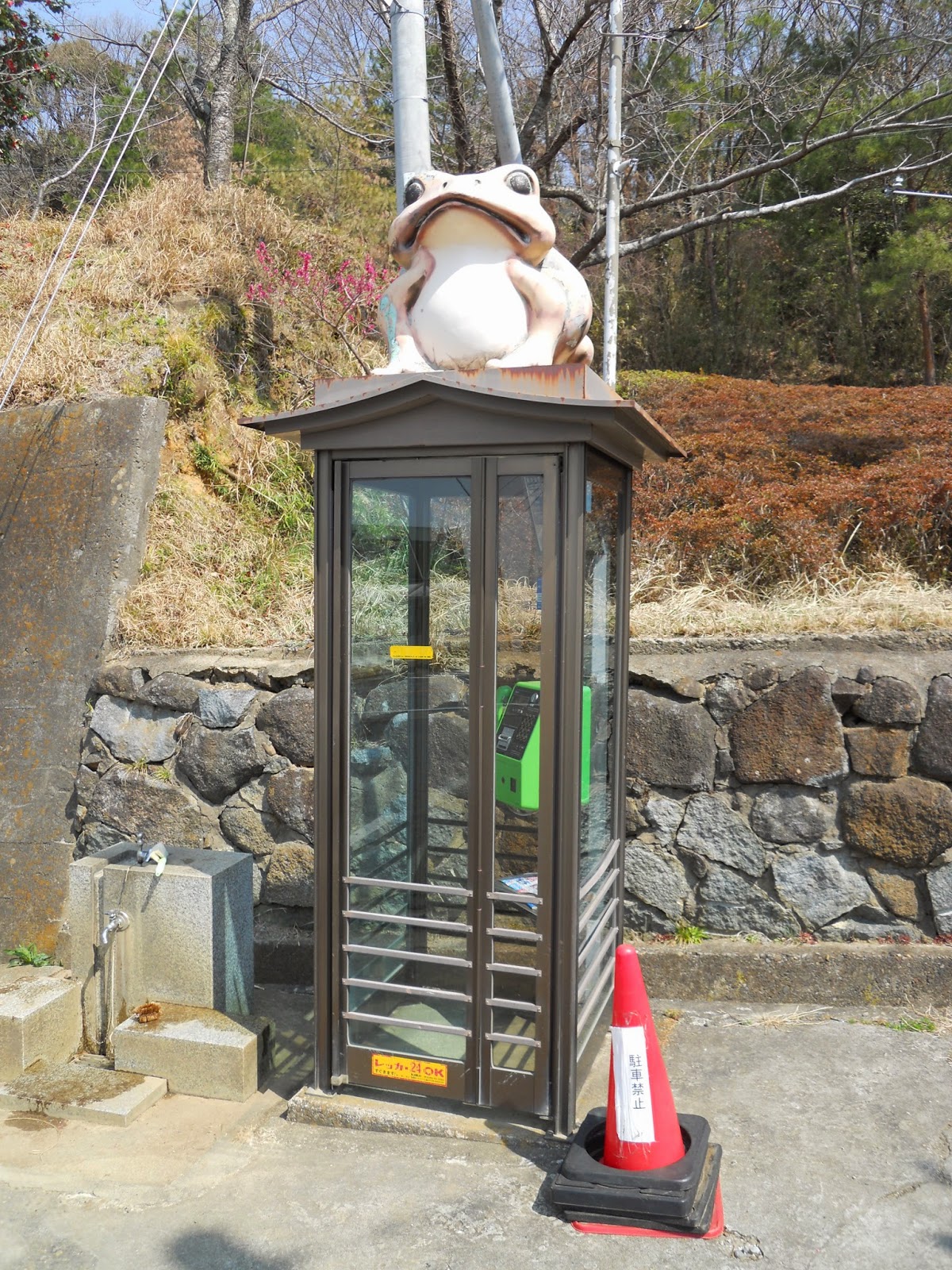 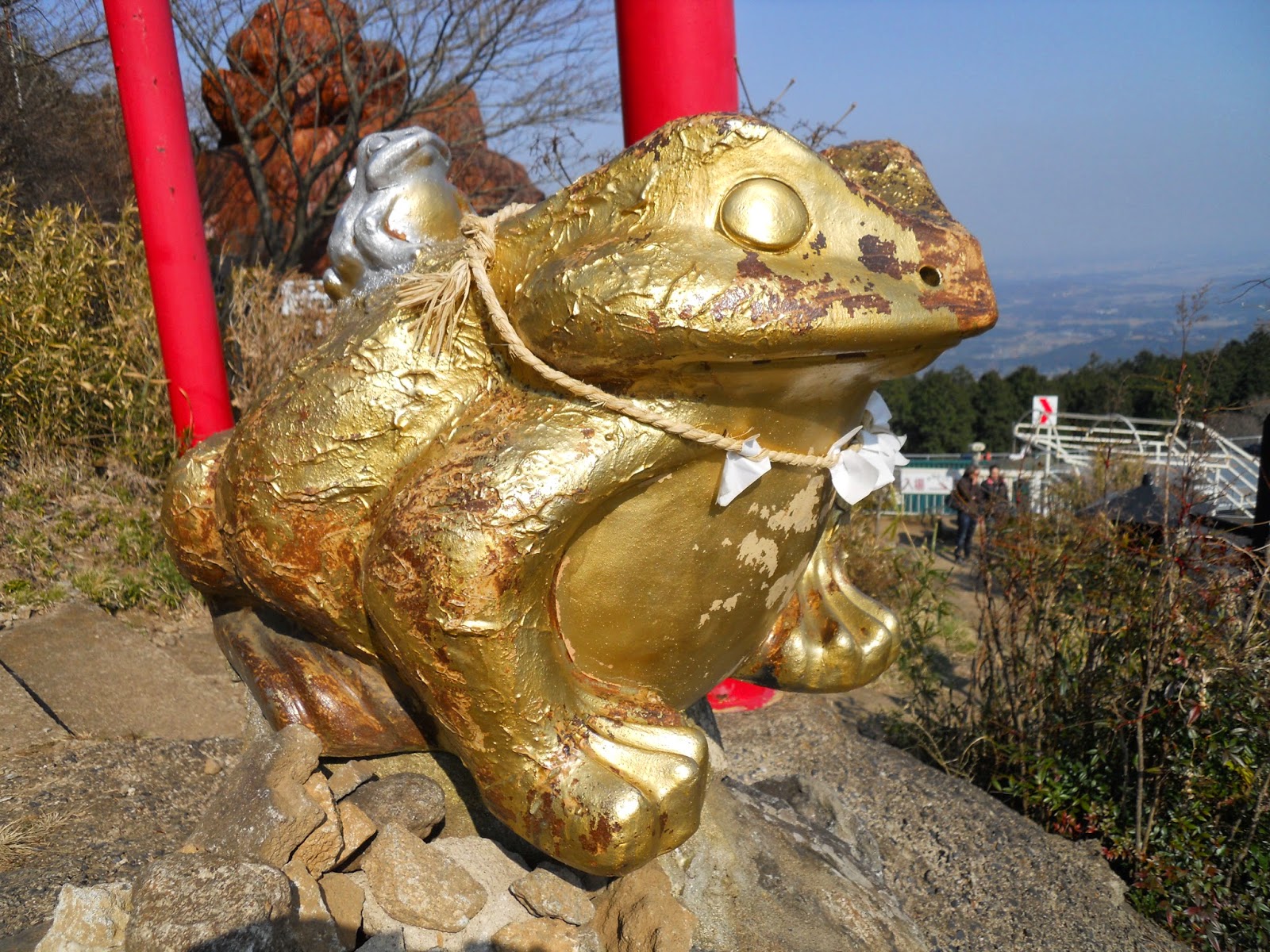 Add to this the mountain's superb variety of trees and seasonal flowers, the panoramic views across its surrounding flats, and its easy accessibility, and you have a recipe for another massive mountain touristification phenomenon. The saddle between the two peaks has been colonised by restaurants, souvenir shops and viewing platforms, serviced from two directions by a cable car and a ropeway. Fortunately humanity's works have not nearly overwhelmed it so much as, say, Takao-san, but if you go, do not expect to have much of the mountain to yourself except in the most immiserating weather conditions.

This does however make Tsukuba-san a flexible day's outing. Only an hour and a half from central Tokyo by public transport, it offers a relaxing family excursion with much to enjoy for dogs and small children, requiring only as much physical exertion as you are comfortable putting in. As a more serious walk, it offers a steep but forgiving hour-and-a-half ascent up the mountain, and a rocky ramble across and down which in total can be completed in as few as four hours, or five to six if you opt to explore multiple paths or take your time around the top. Experienced hikers will find little to challenge them, but Tsukuba-san is perfect for unconfident beginners seeking to gauge their endurance, or for some good exercise to get back in shape.

To get there, take the Tsukuba Express train from Akihabara Station; the Rapid service takes only 45 minutes. At Tsukuba station, take Exit No. 3, then go to Bus Stop No.1 for the bus to Tsukuba-san (about 40 minutes, 700 yen one-way, timetable here). Get off at either Tsukuba Shrine Entrance (筑波神社入り口, Tsukuba Jinja Iriguchi), or Tsutsujigaoka (つつじヶ丘), depending on which side you want to climb from. This article covers a circuit starting and ending at the shrine. The mountain's routes are well-signposted, with maps on frequent display, and there are clusters of restaurants and shops at both starting points and at the top. 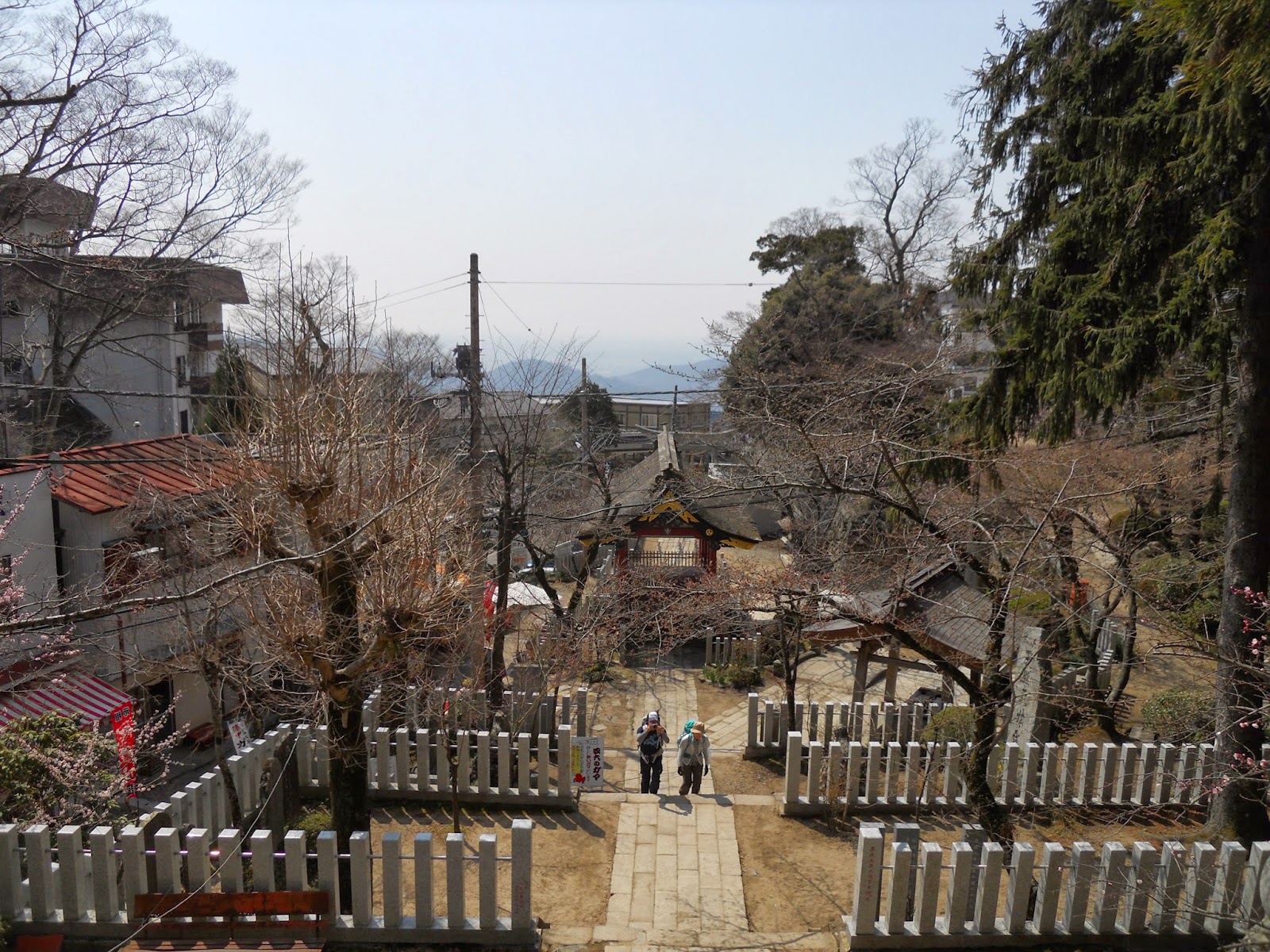 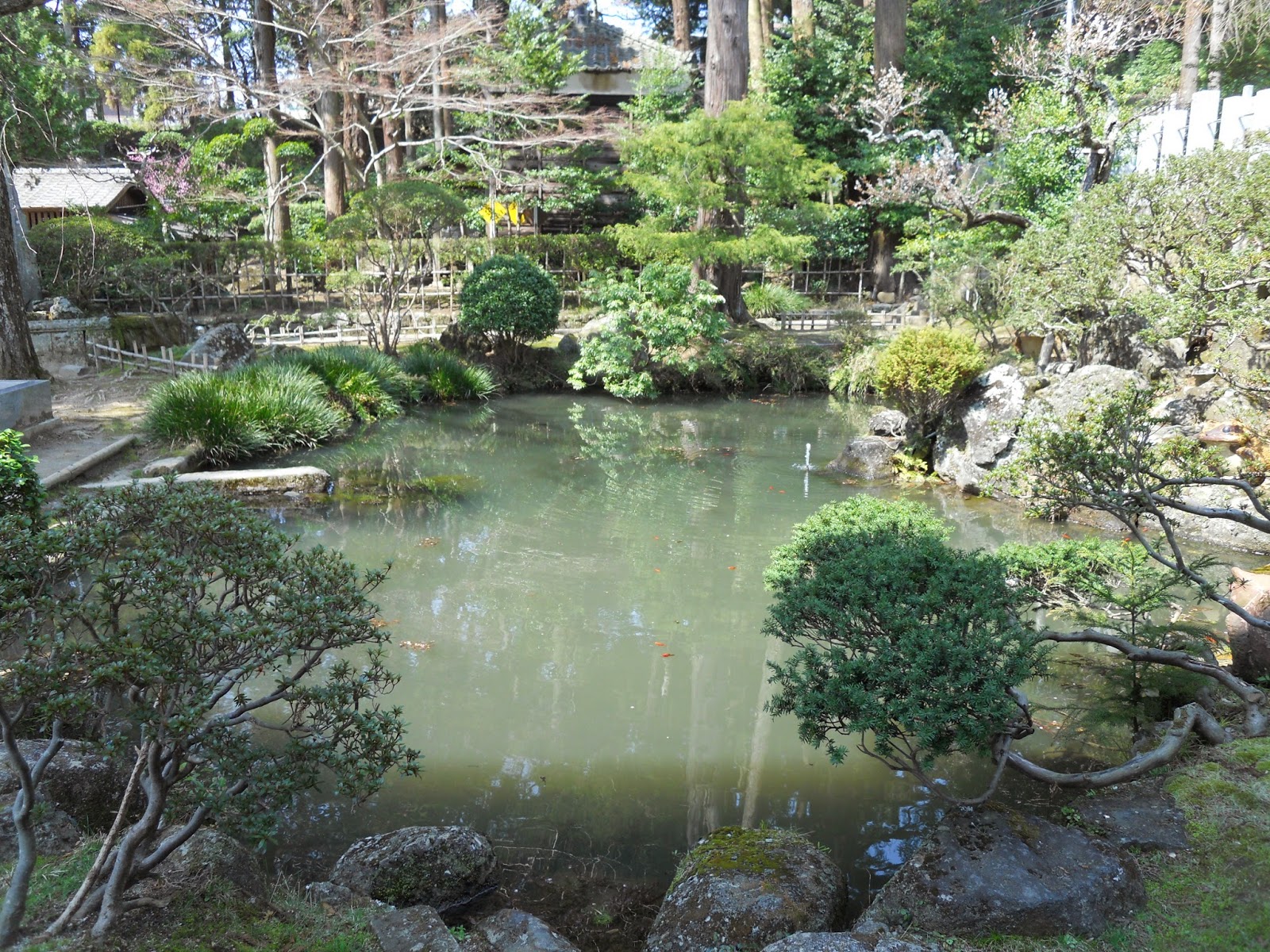 From the bus stop near Tsukuba Shrine, walk through the massive red torii and continue a few minutes up the road to reach the shrine compound proper. It is quite large, and worth an exploration in itself. Ultimately the way up the mountain begins in that compound's northwest corner: whether, for you, that is the trailhead or the cable car station. The steep trail rises in parallel to the tracks for a while, then diverges for the remainder of the ascent. There are many large beeches along here. 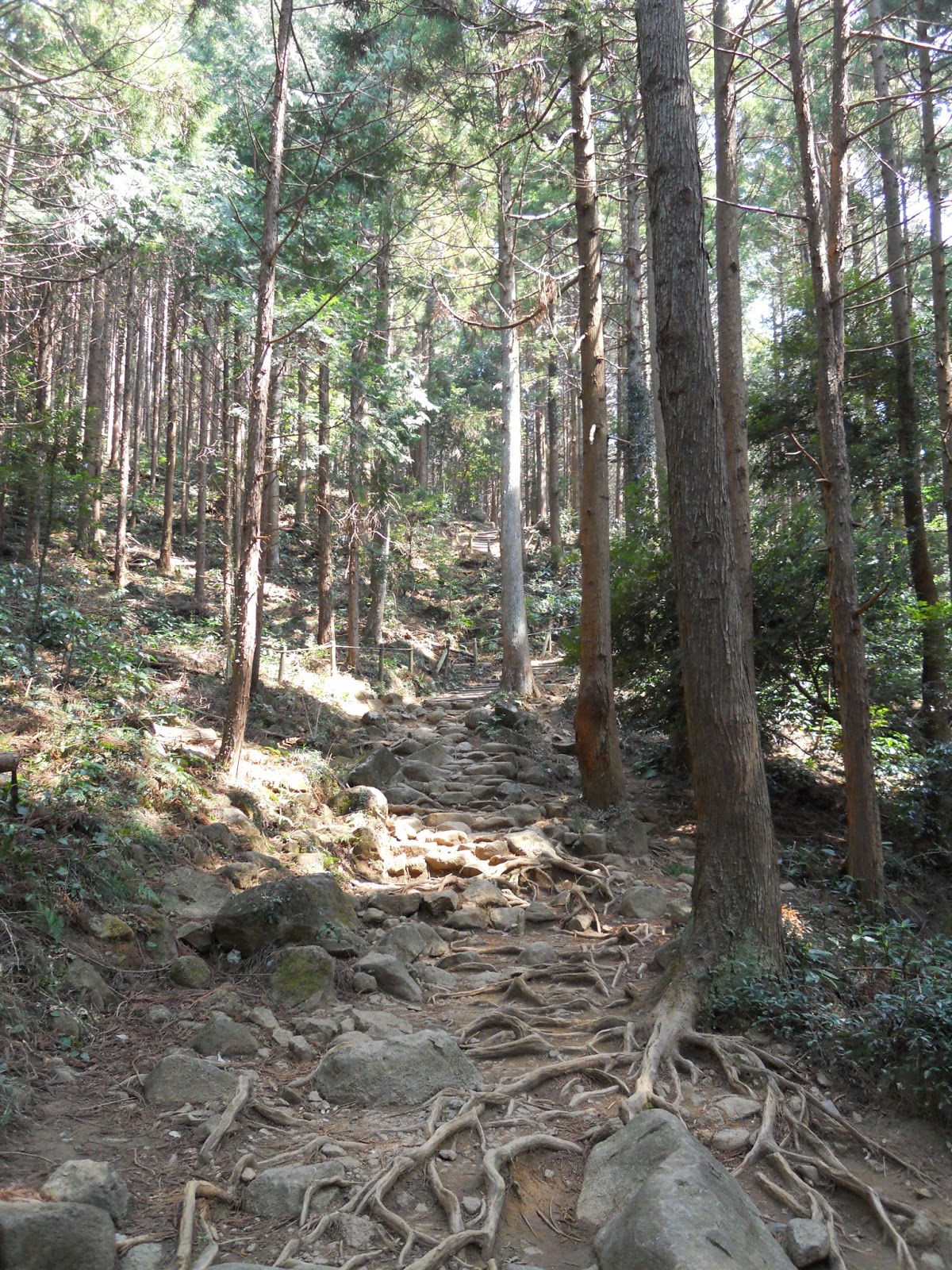 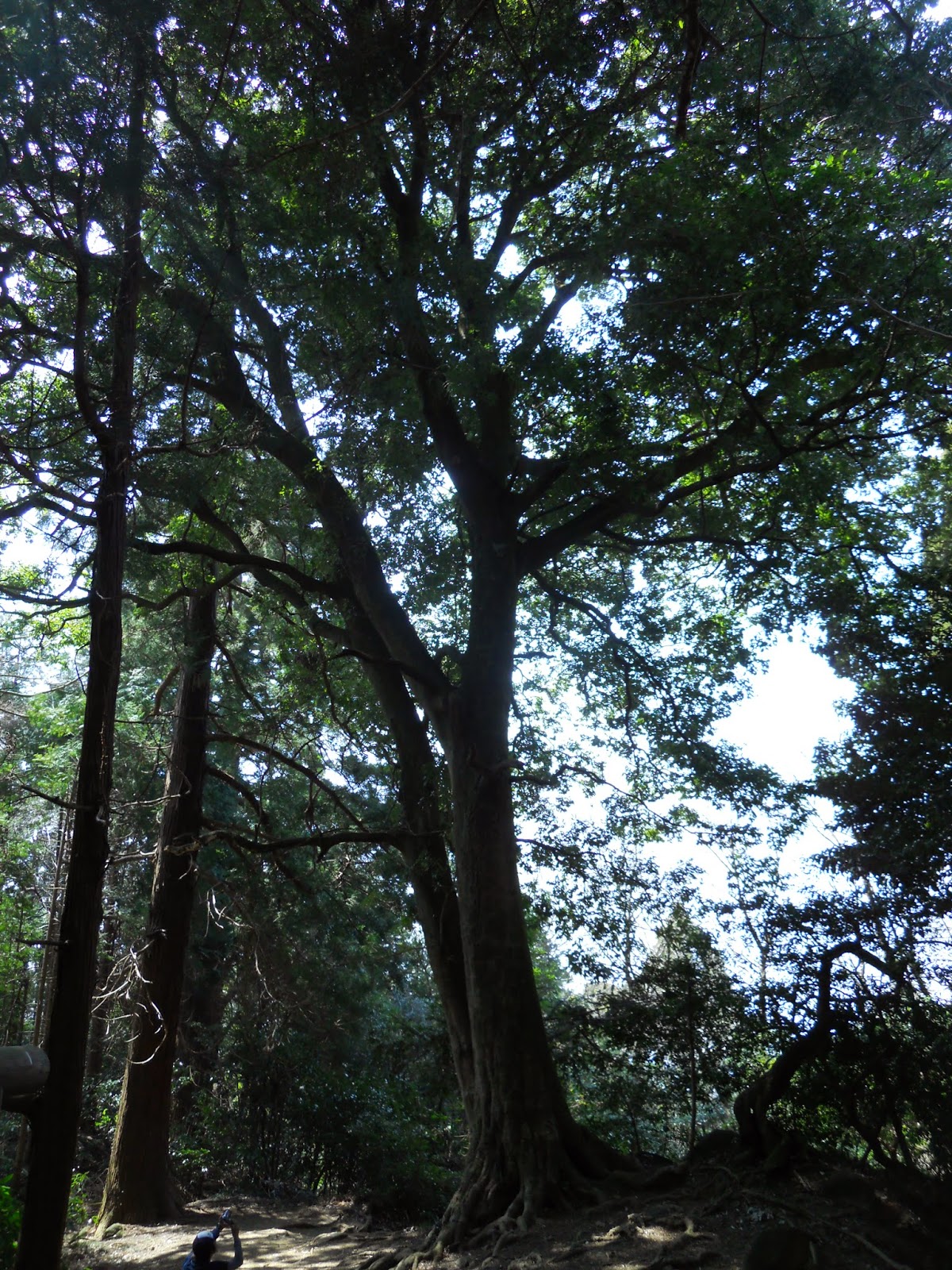 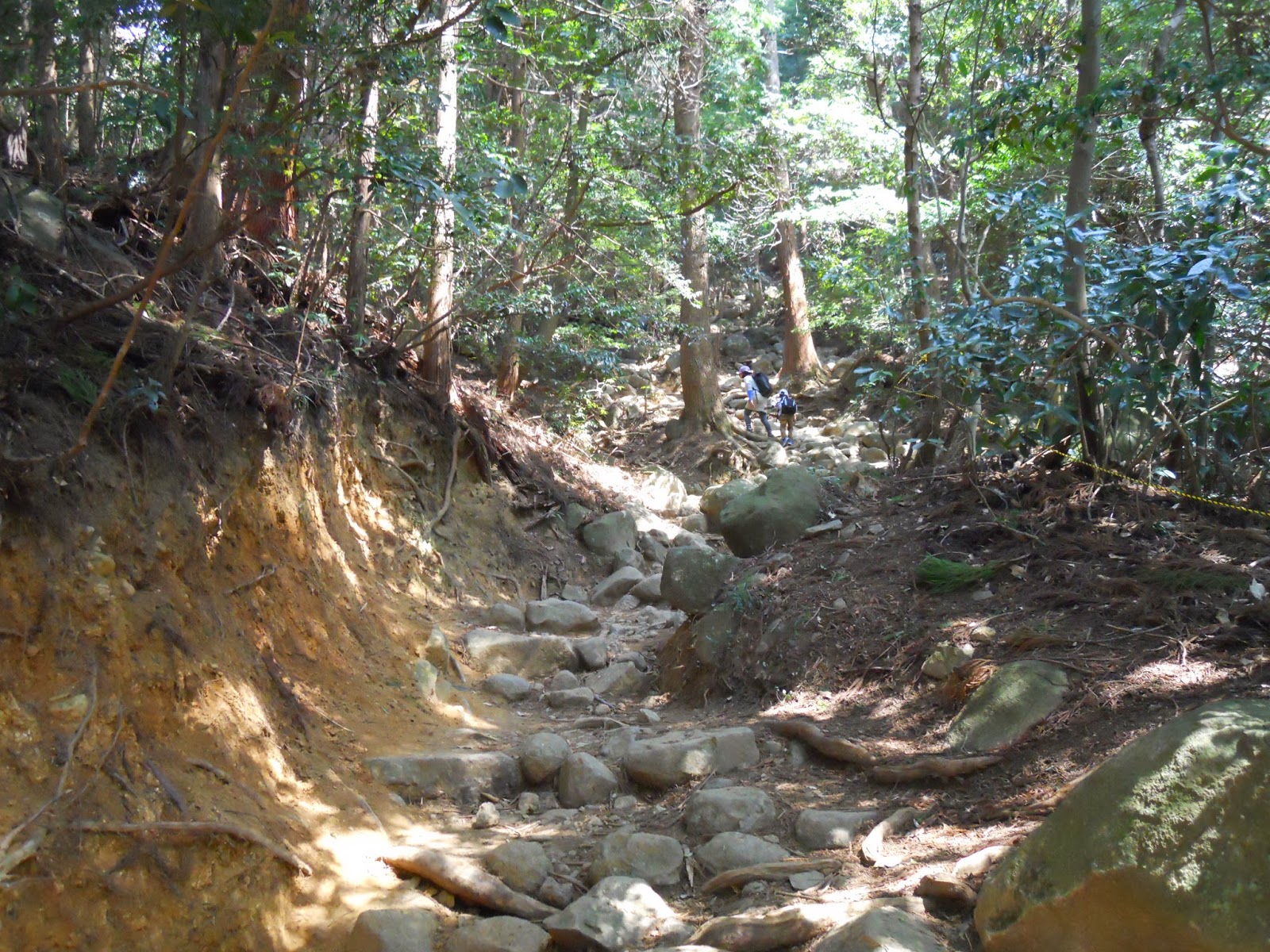 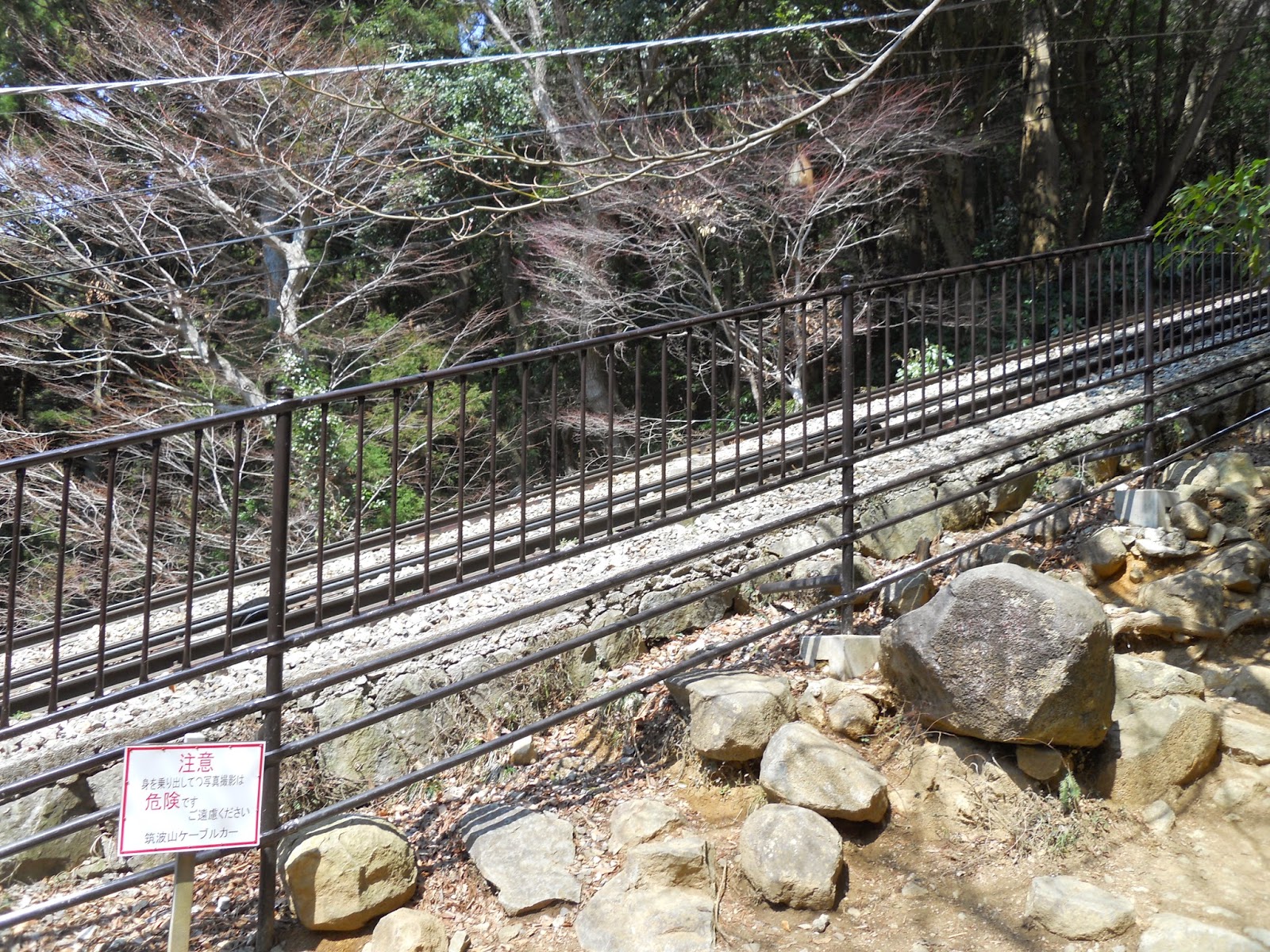 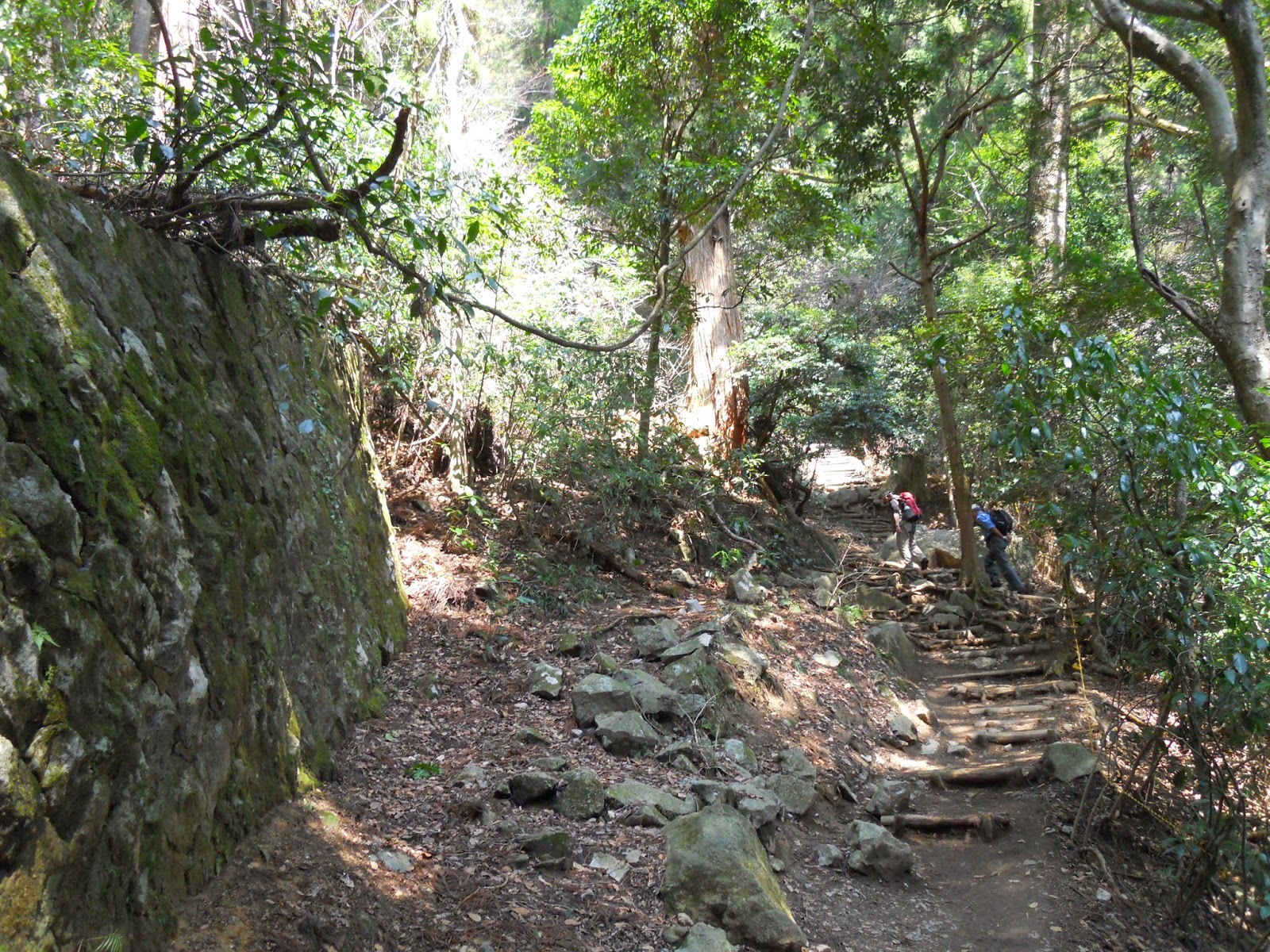 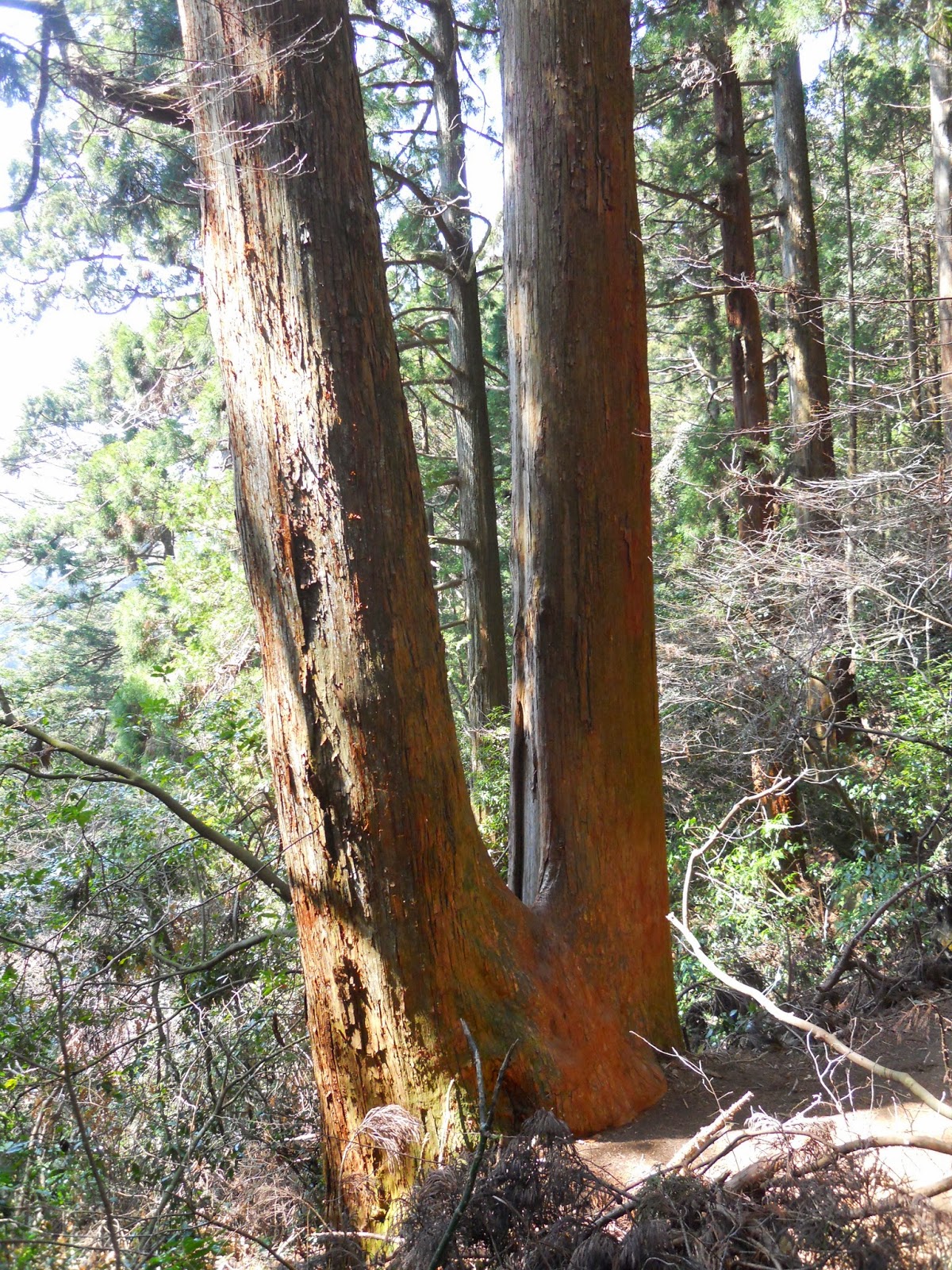 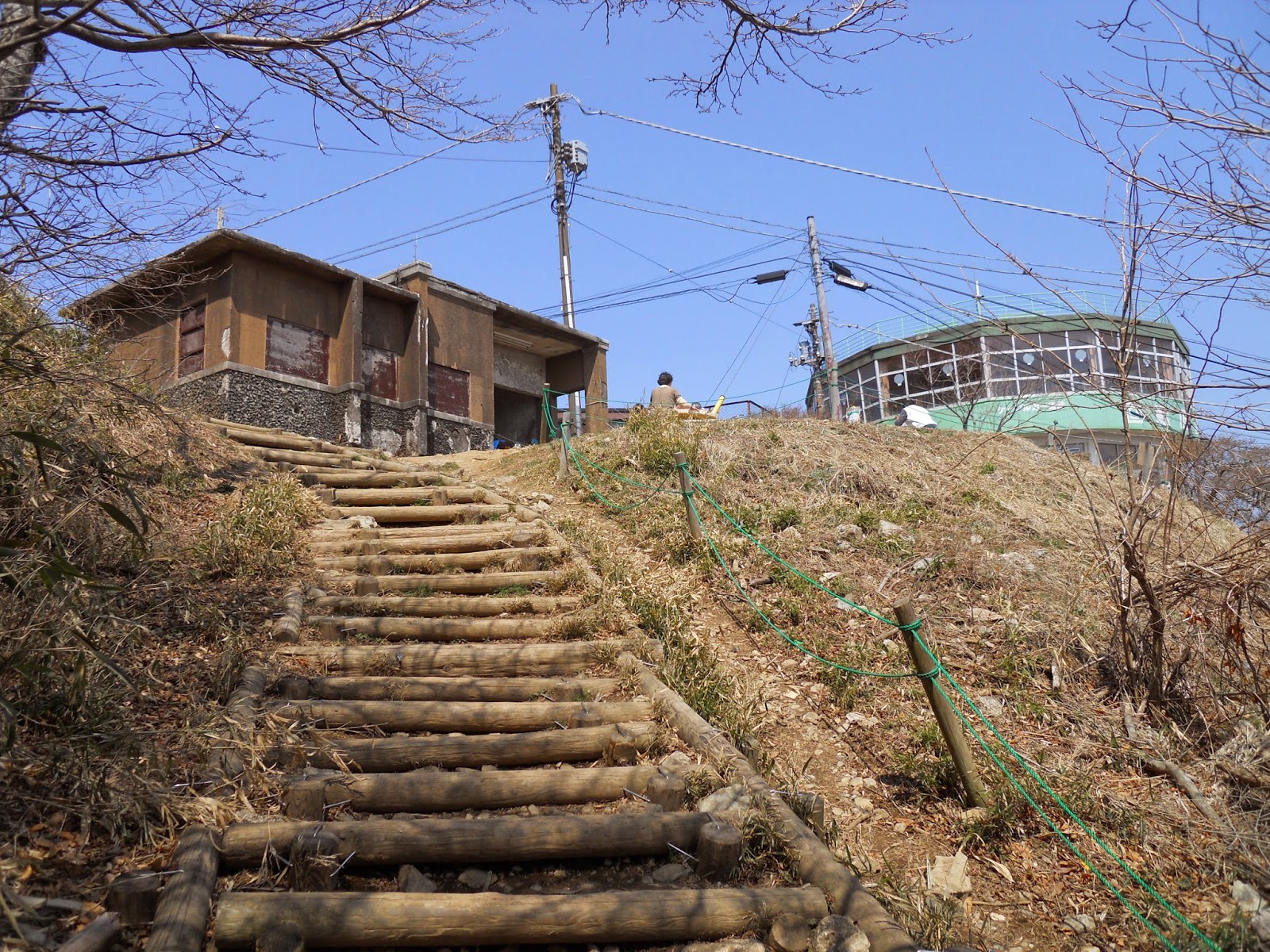 The path emerges straight onto Miyukigahara (御幸ヶ原), at the saddle between the two peaks. This little plateau is lined with souvenir shops and restaurants. If you didn't bring your own provisions, you will have no trouble getting hold of some mountain noodles or ice cream here. Both peaks are in plain sight, and there are some good views north.

Of the two peaks, Nantai-san is right next to this plaza, and the summit is only a final ten-minute clamber up some stairs. If you hiked up this far, you will now be joining the cable car crowds, so expect this part to get congested. 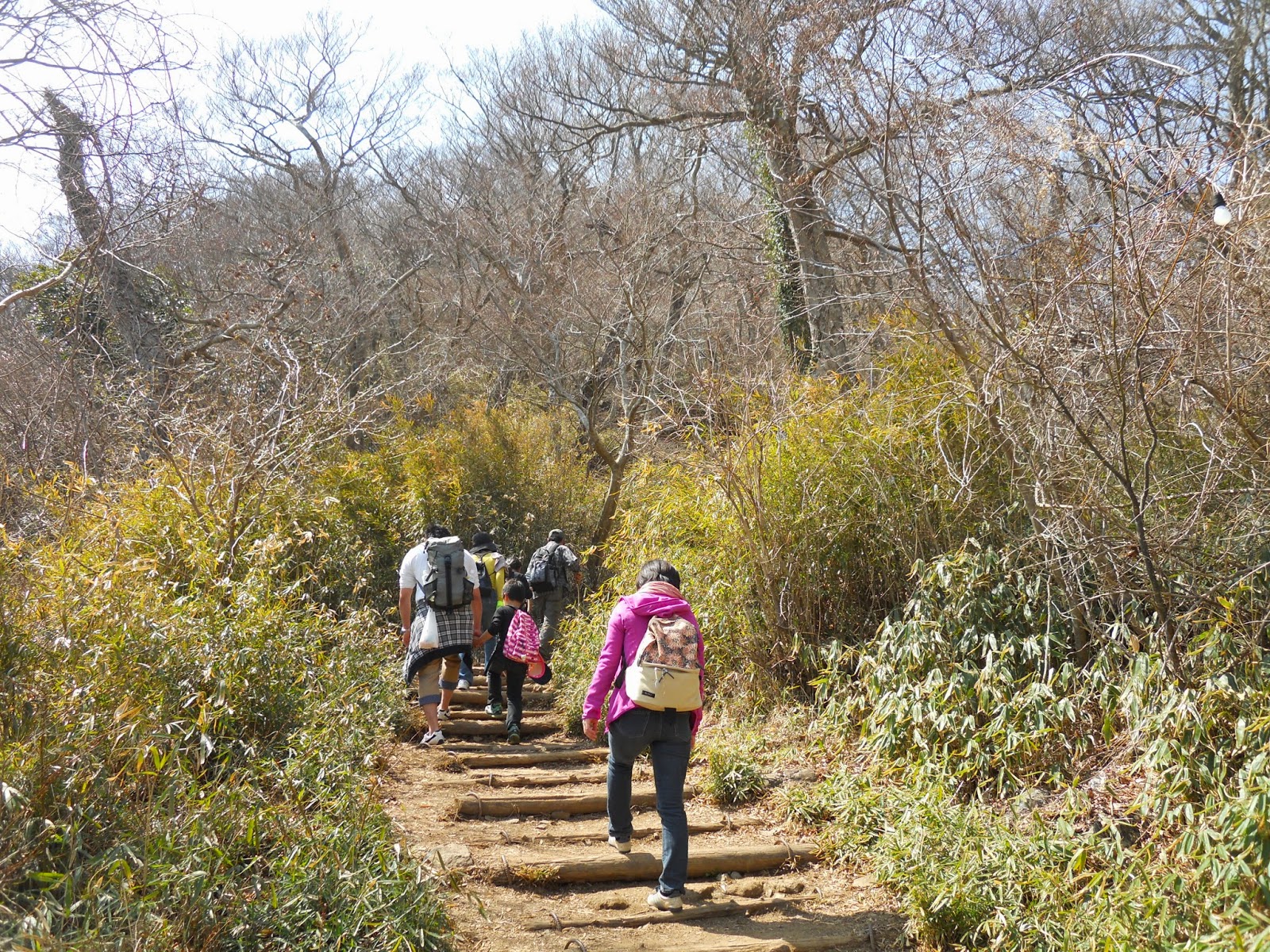 A small shrine stands at the summit, where some visitors will line up to pray. Keep an eye out for good views nearby. 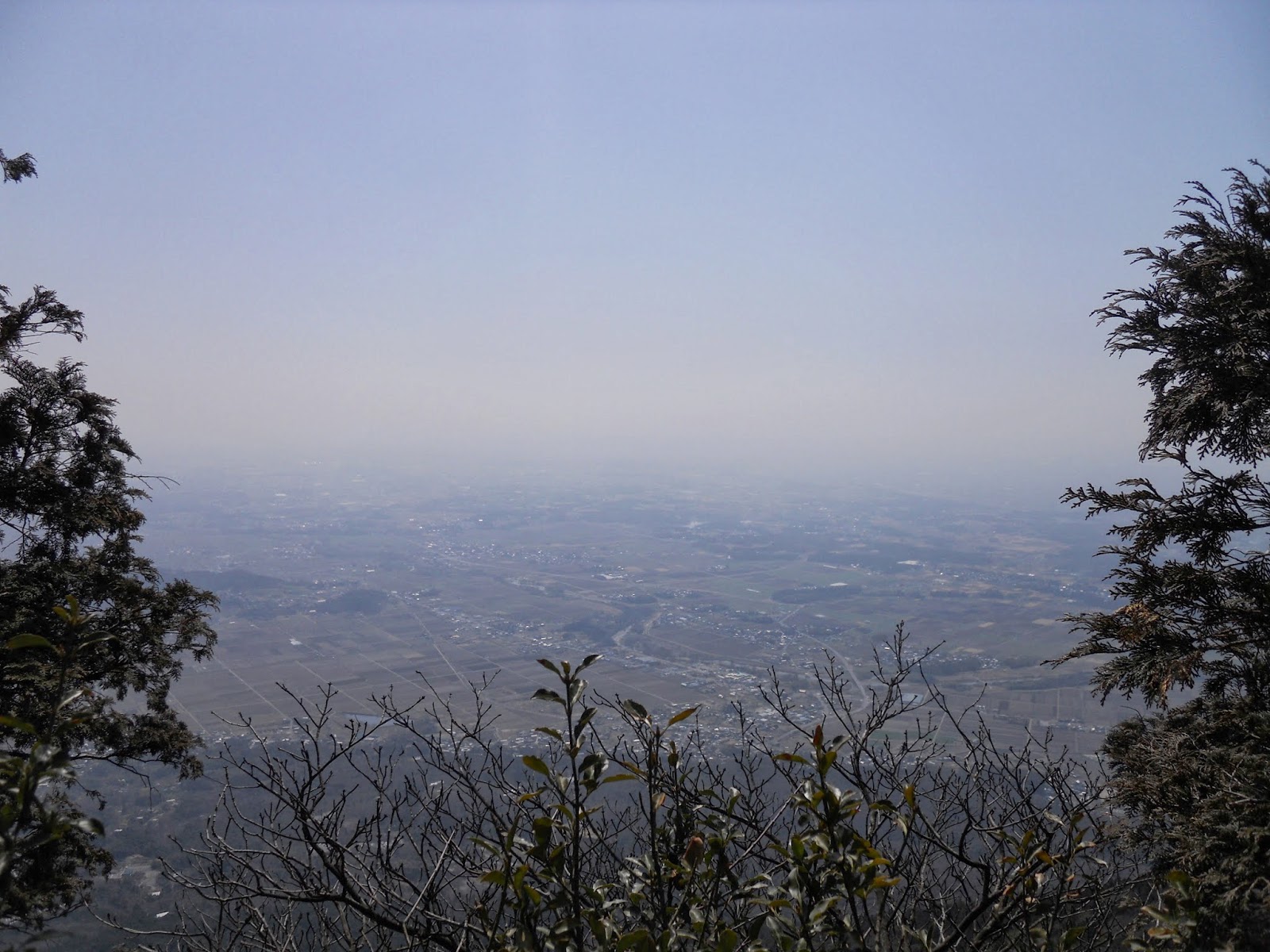 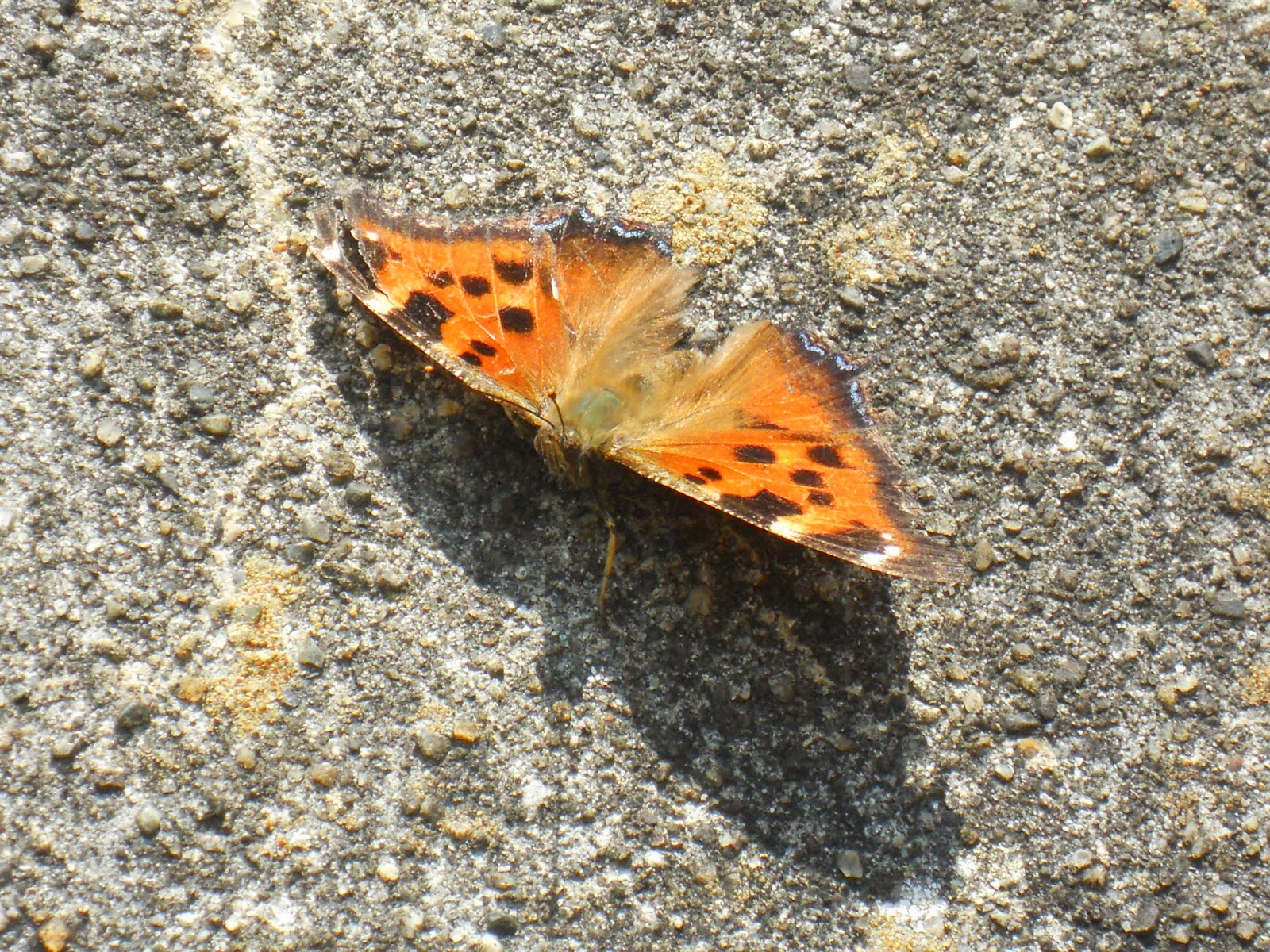 There is also a circular trail around the peak, starting and ending at Miyukigahara, that features interesting structures and natural formations marked out on charts there. Unfortunately, my investigation of this was curtailed: a fallen tree had destroyed part of the path, making it impassable past the first quarter. 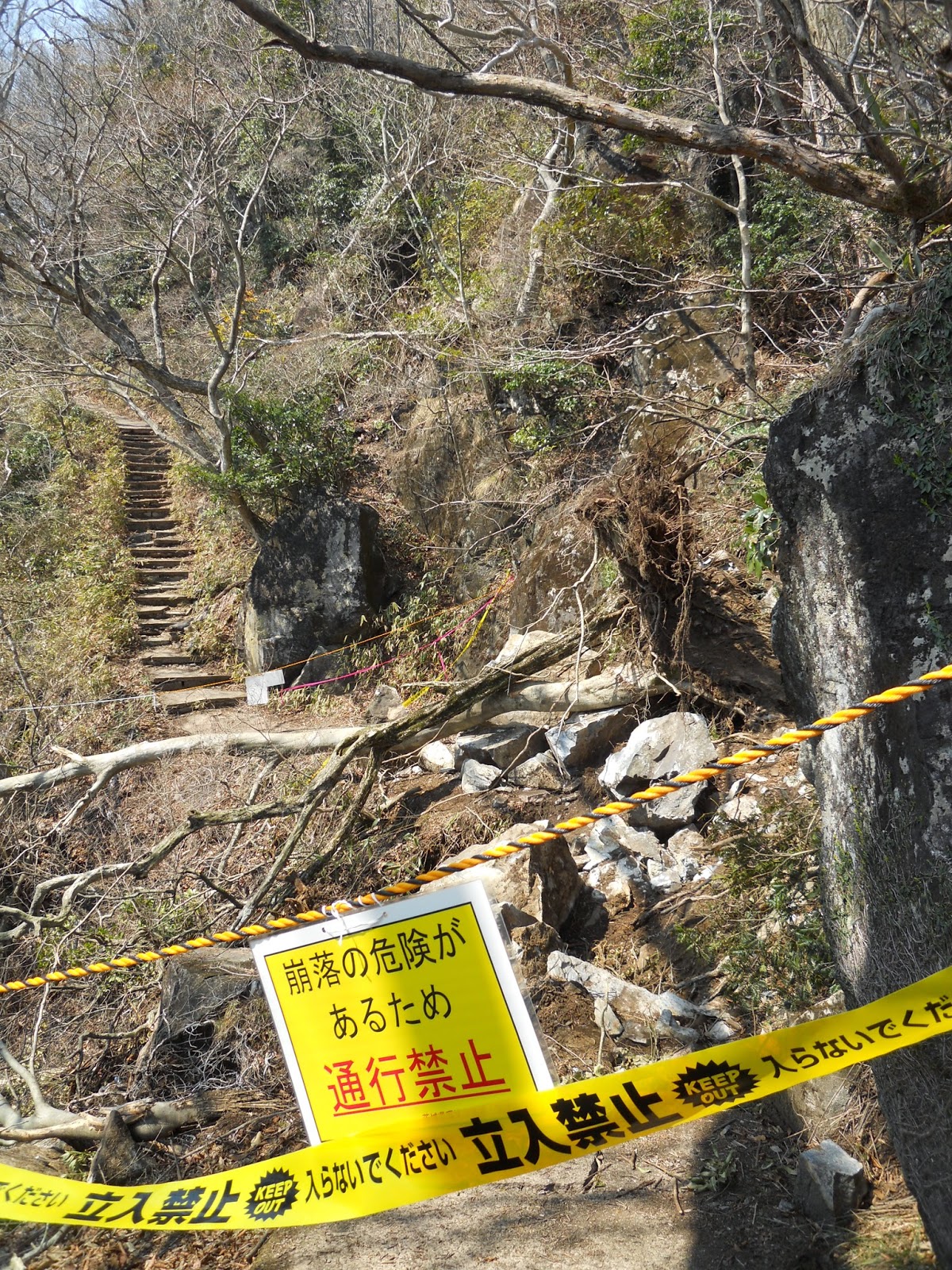 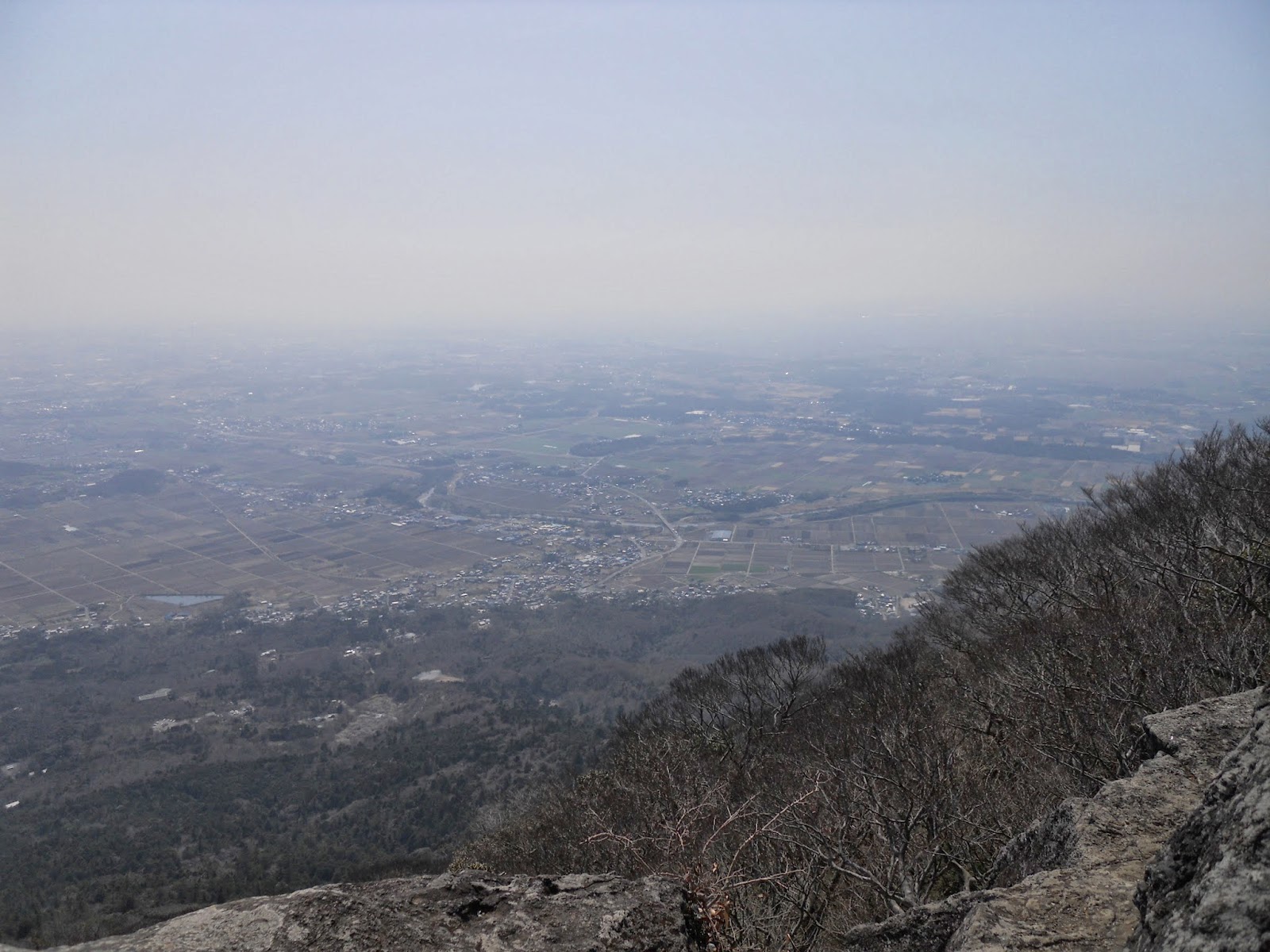 Returning to Miyukigahara, a straightforward stroll to the east leads on to the primary peak, Nyotai-san, along a leafy promenade of radio towers and rock formations. The “toad rock” is here, among several others. 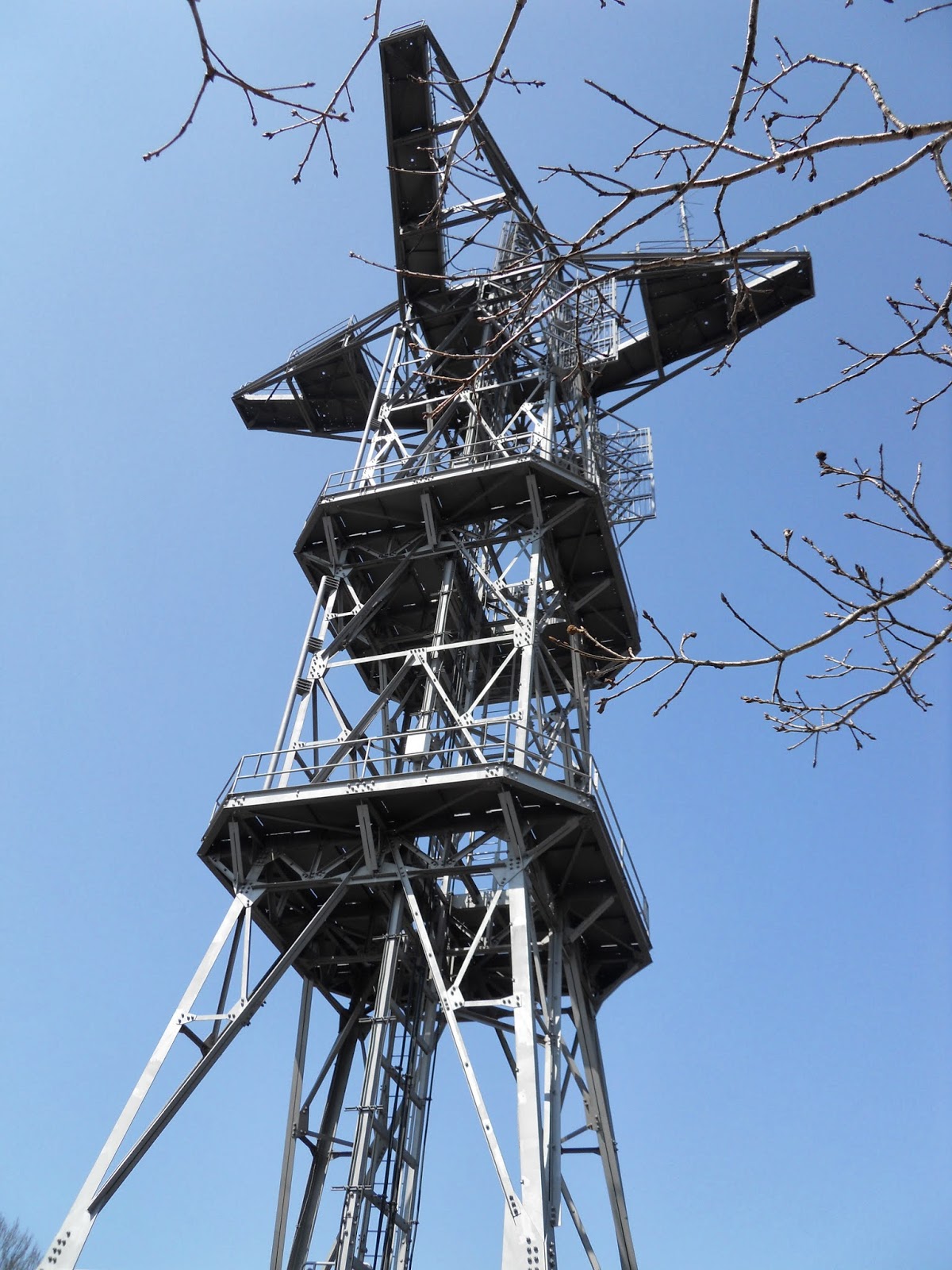 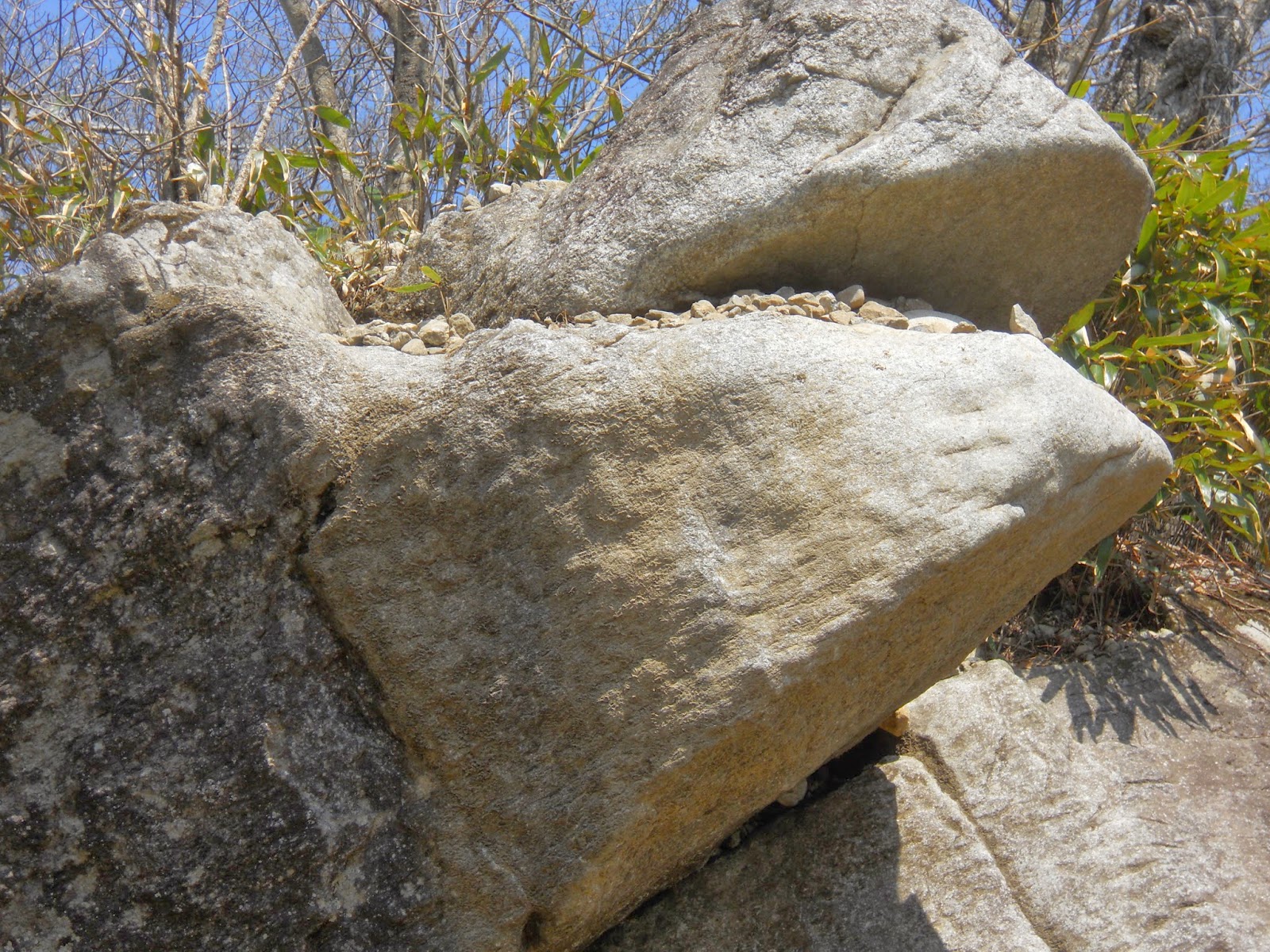 Another shrine stands at the top of Nyotai-san. Clamber onto the rocks beyond for some of the most impressive views of the day. You can get almost a 360-degree view here: north along the shallow ridge towards Ibaraki's northern mountains; east down to Tsutsujigaoka; and south across Tsukuba City, towards Tokyo. 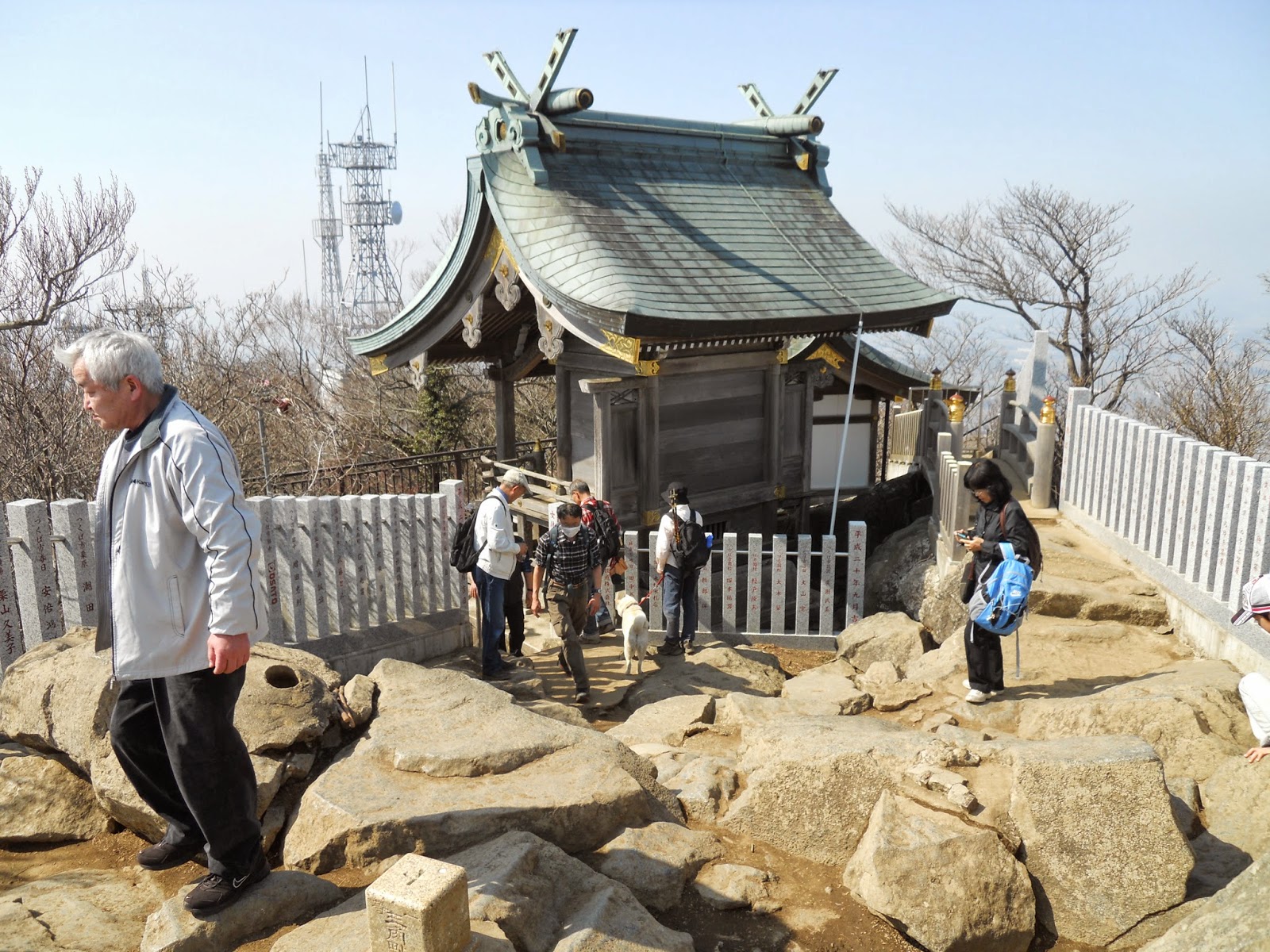 The descent from Nyotai-san is rocky, requiring cautious negotiation. For those who would find this too much, the ropeway station down to Tsutsujigaoka is also around here. If you walk, you will find the majority of Tsukuba-san's notable rock formations along this section, each with signs in Japanese explaining its significance. 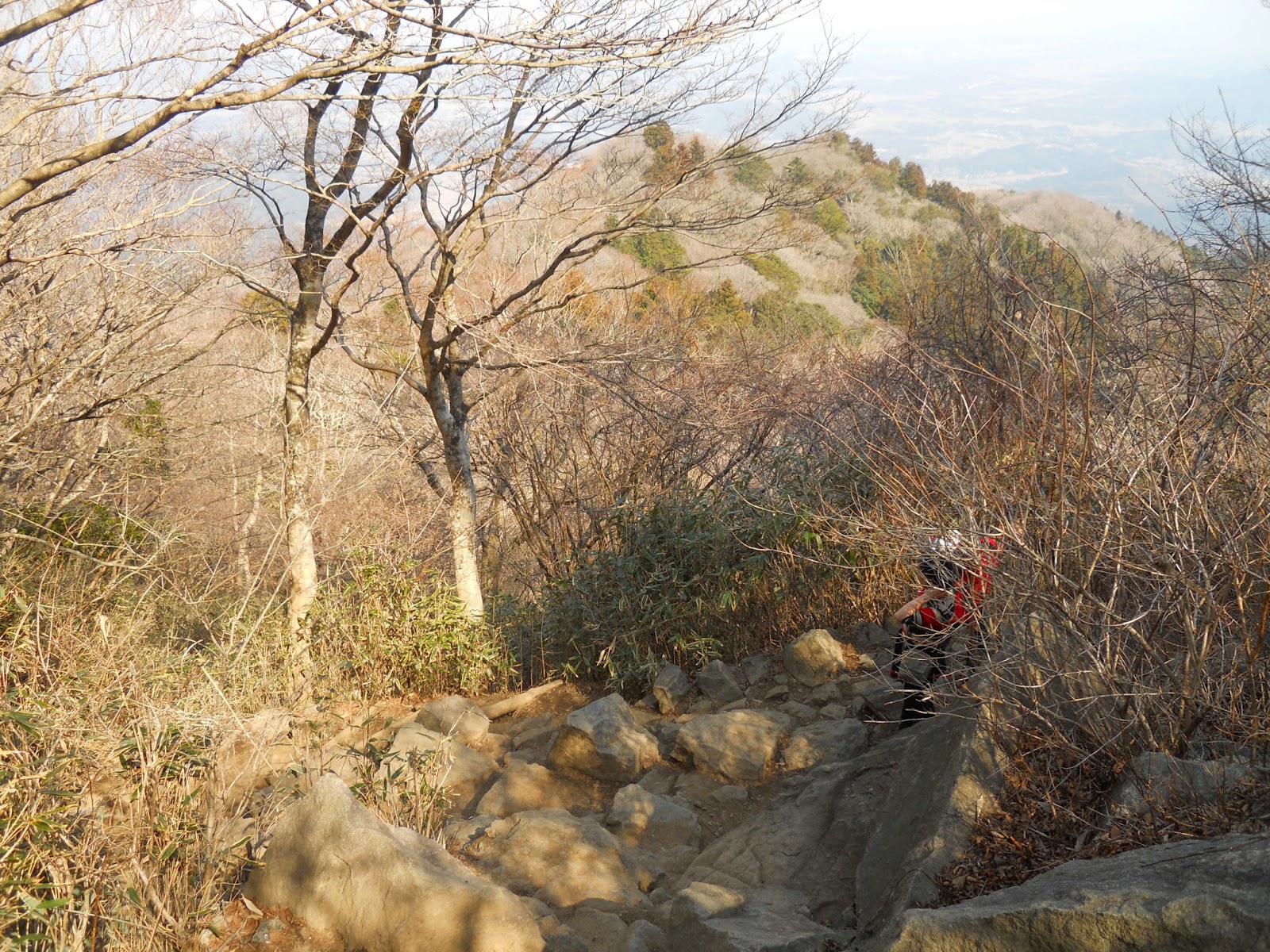 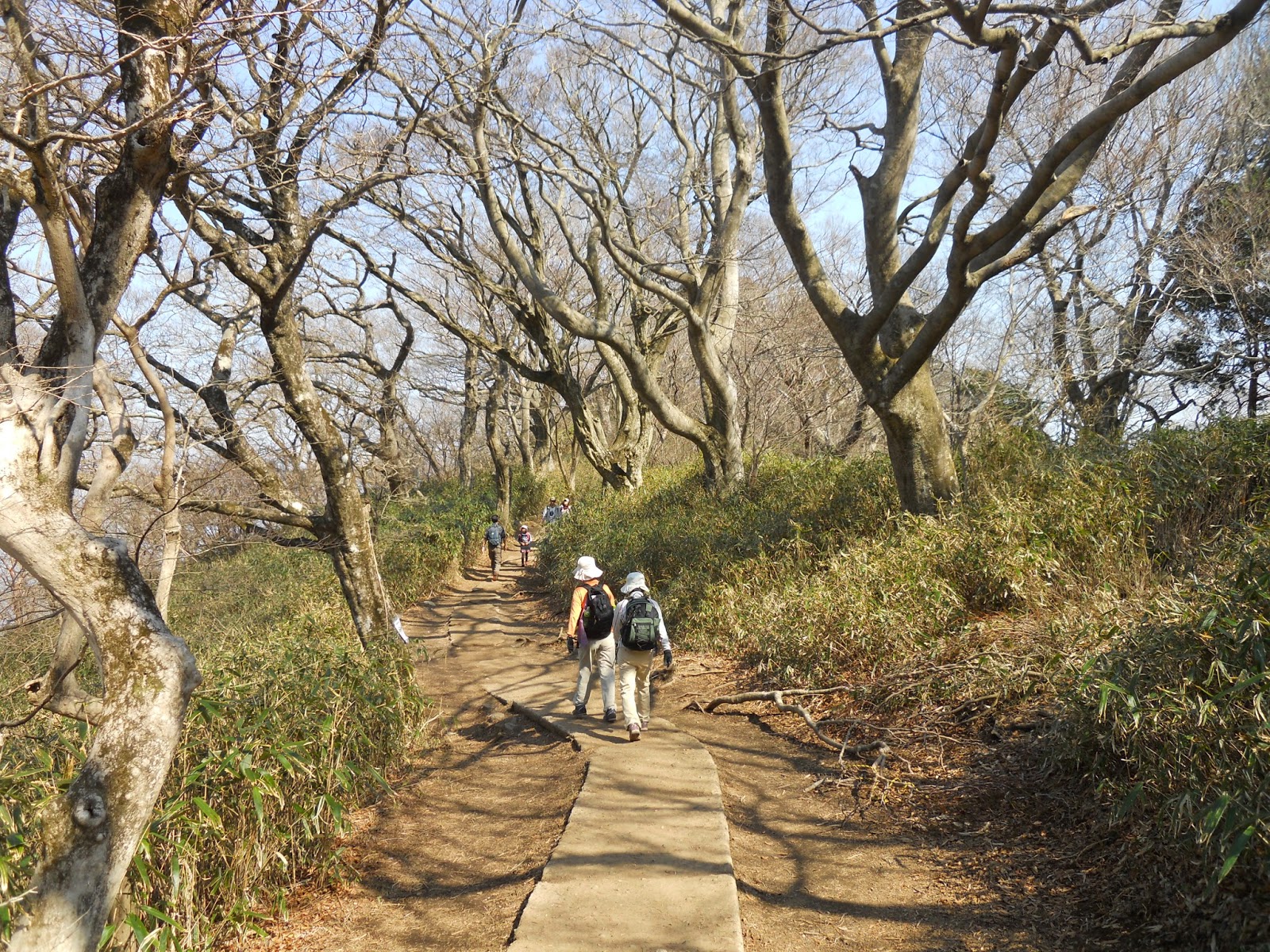 After all of these and others you reach Benkei Nanamodori (弁慶七戻り), or “Benkei Returning Seven Times”. It is said that the renowned warrior-monk Benkei was so intimidated at this stage that it took him seven attempts to reach the mountaintop.

Here the path forks, with one trail leading back down to Tsukuba Shrine, and the other carrying on to Tsutsujigaoka. The latter widens out as a bright open hillside, with further good views and ideal picnic sites for those who prefer to avoid the bustle of Miyukigahara. 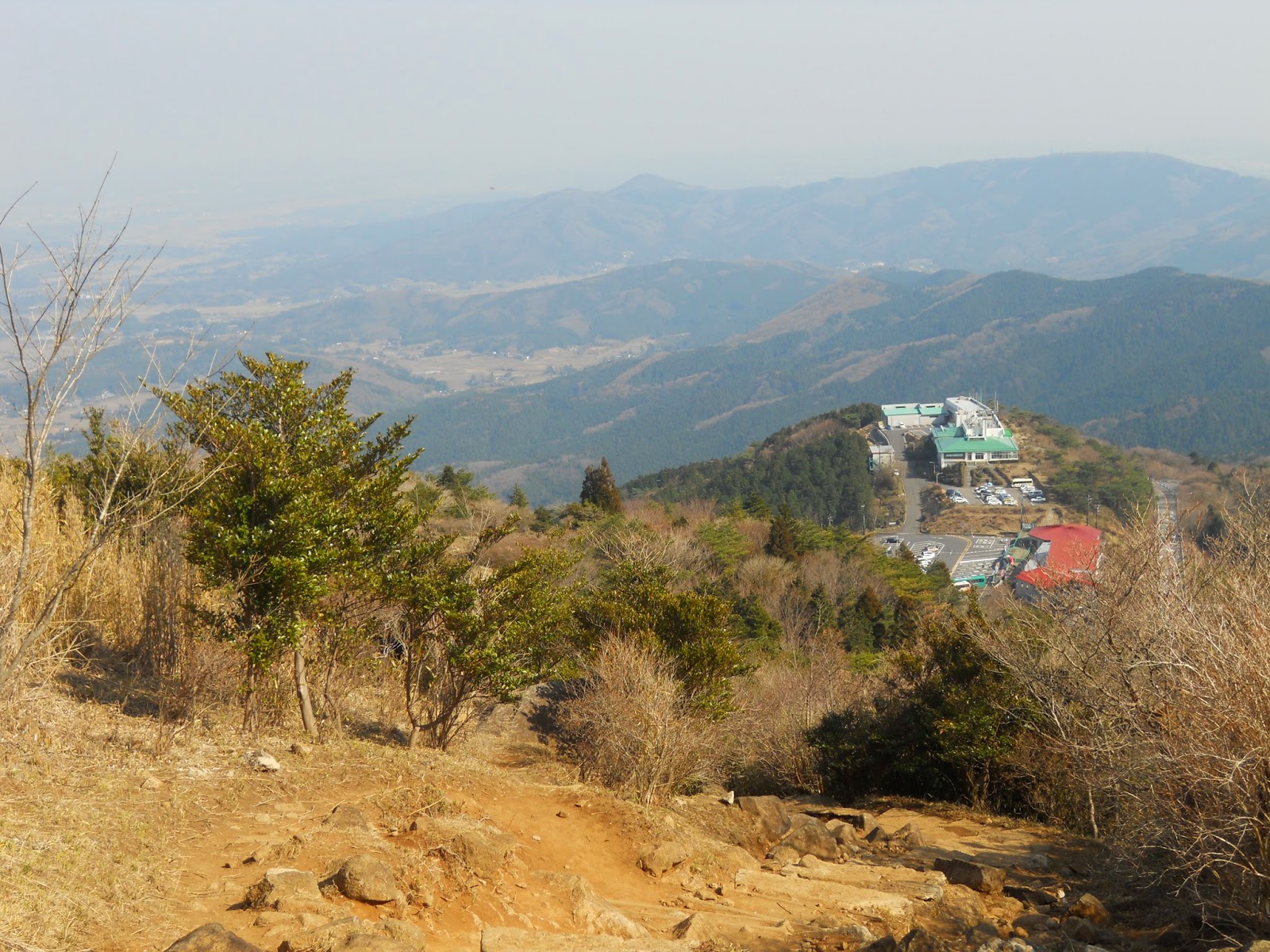 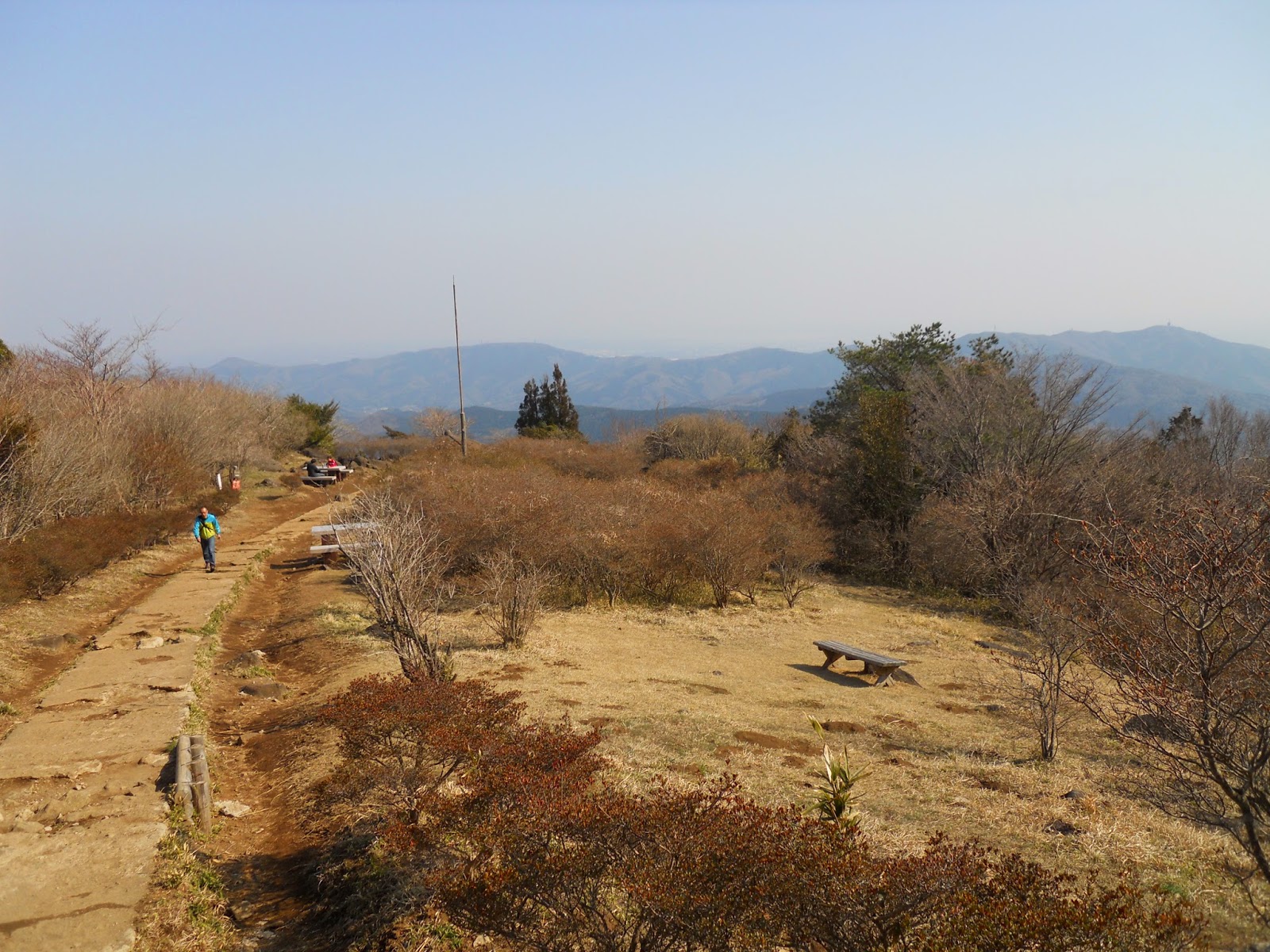 Tsutsujigaoka itself is also done up with restaurants, a large car park, various buildings, and an ancient but bright little theme park evoking faraway eras of socialist glory gone by. The toad theme is in evidence here too. 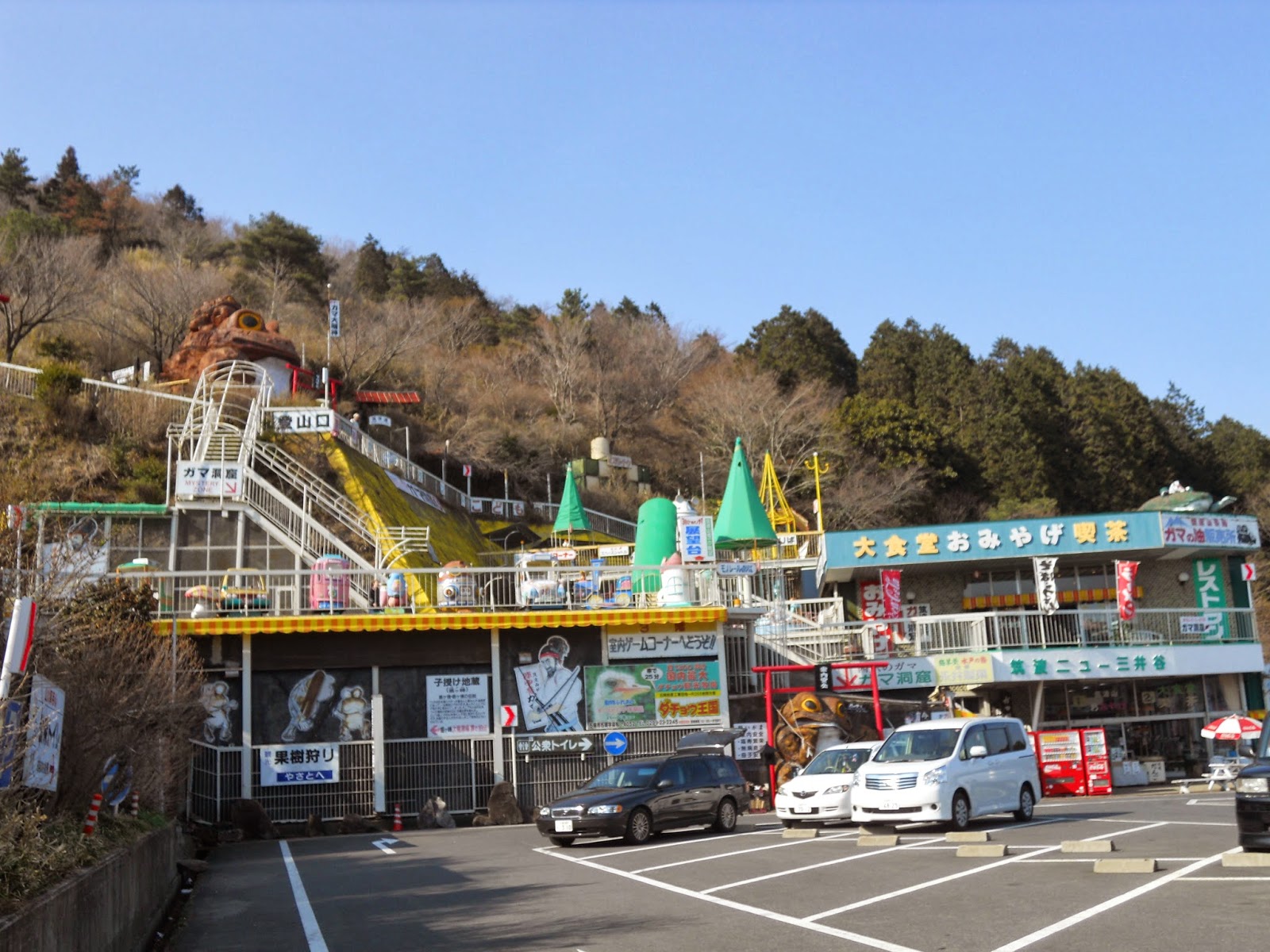 It is possible to get the bus back to the city from here, but if you've walked this far, you might as well complete the circuit by taking the low path back to Tsukuba Shrine. From here it is a simple affair, through woodland and the obligatory sugi plantation. 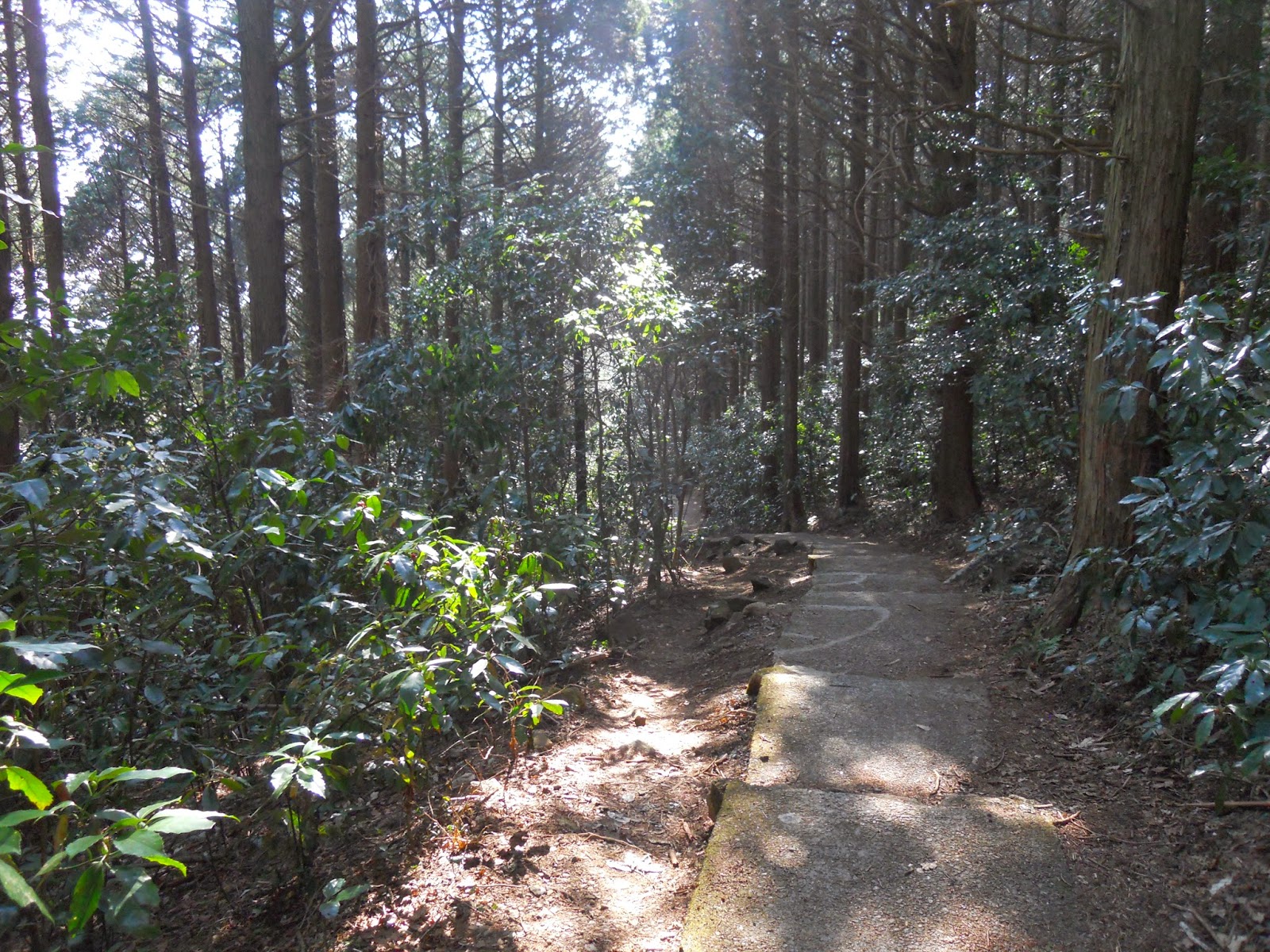 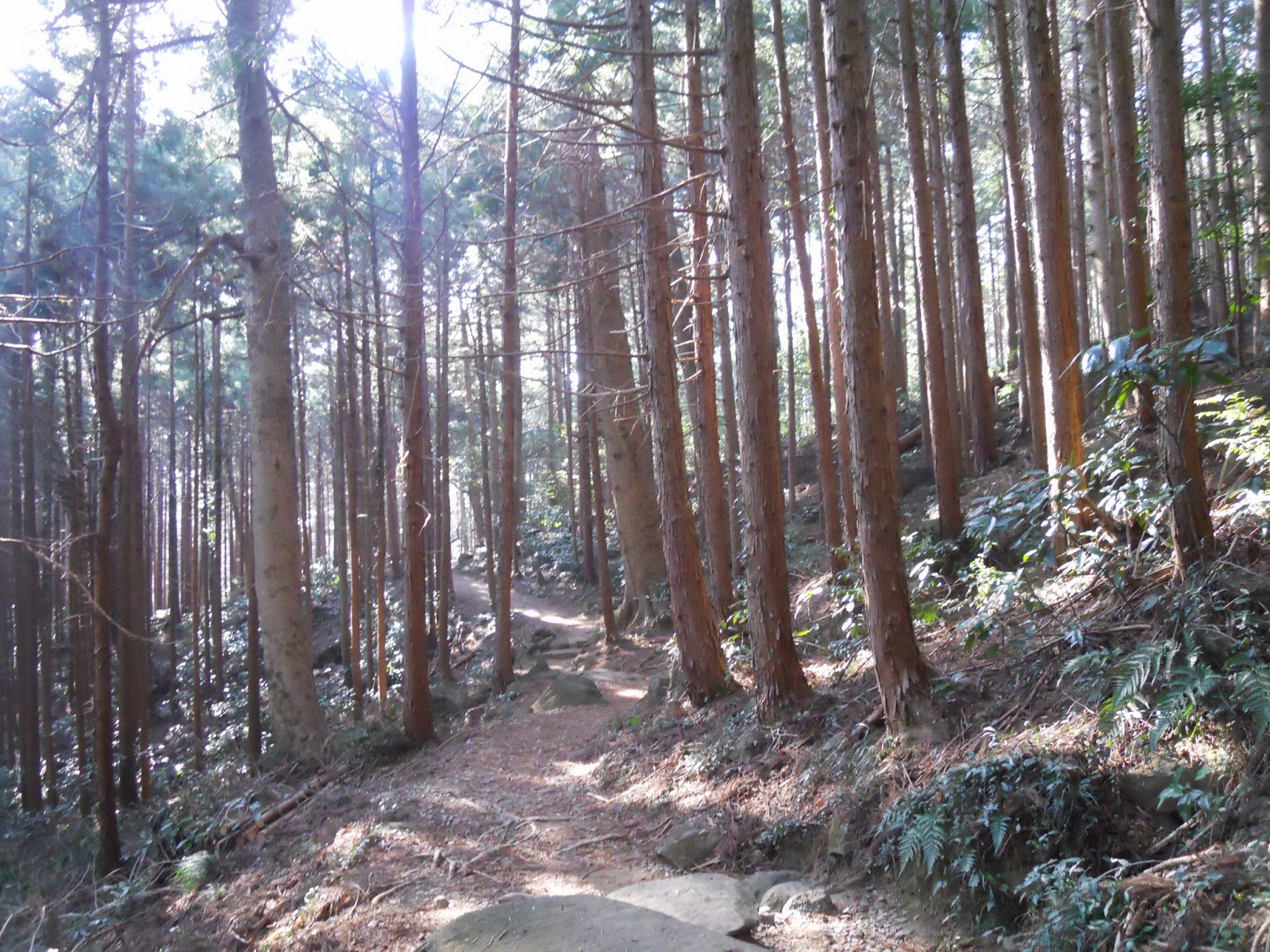 Before long you join the road near Tsukuba Shrine, from where you can head back through the huge red torii for the bus back to Tsukuba Station. The 100 Famous Japanese Mountains do not come much more relaxing than that.
Posted by Chaobang at 10:48