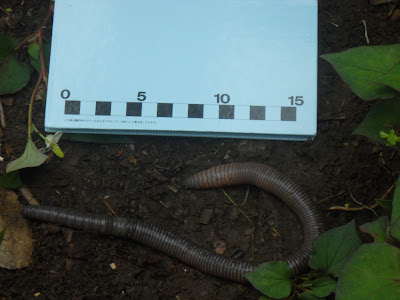 Behold this fine fellow. Yes, those are centimetres on the scale, not millimetres. 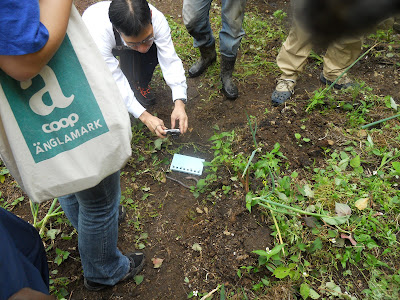 You may wonder where I encountered this impressively proportioned comrade. The answer: Fujino, a town with a special story to tell, in the mountainous west of Kanagawa. I recently had the opportunity to visit this community, along with a group of UNU colleagues. 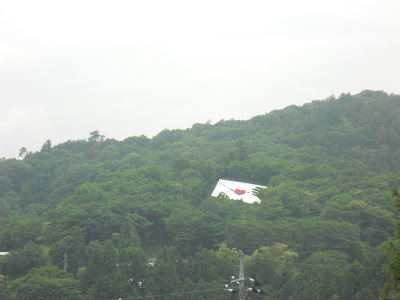 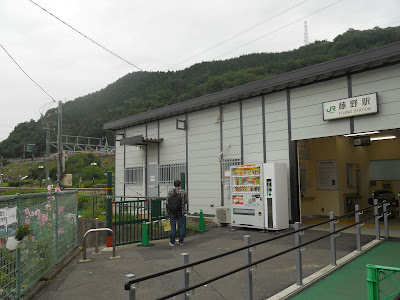 Fujino was Japan's first Transition Town: an initiative that first took form in Totnes, England, and has since spread worldwide. 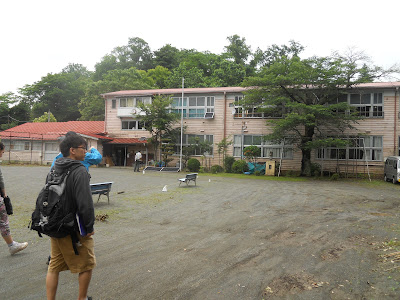 In the community centre, based in this former abandoned schoolhouse, those involved elaborated on the initiative's vision. In the face of humanity's mounting sustainability crisis, in particular the pressure from climate change and the loom of peak oil, the movement recognizes the need to drastically improve societies' resilience and energy consumption patterns, and resolves to work towards a more sustainable, ecologically connected and thus enriching and fulfilling mode of life. It is fundamentally a grassroots movement, based on free and voluntary participation, which derives its strength from improving community interactions and unleashing people's creativity and resourcefulness.
Fujino's journey as a Transition Town started in 2008, and already a number of projects and work groups have materialized, born from purely grassroots initiative, to advance its key sustainability goals. For example: 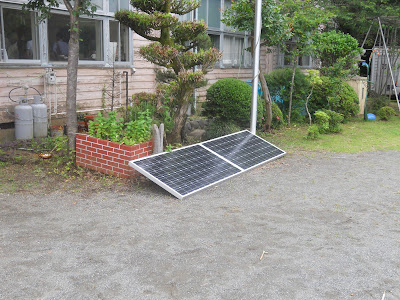 As concerns agriculture, we also visited a permaculture project: 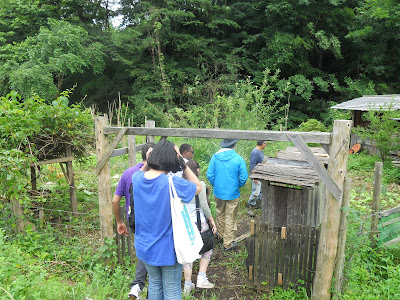 These grounds were generating an impressive diversity of carbon- and nitrogen-neutral crops, to the aim of creating a thriving and self-sustaining ecosystem, with as few external inputs and little waste as possible.
'Harmonious vegetables' were planted together, assisting each other with their nitrogen-fixing bacteria and the like, and with onion plants nearby whose odours protect them from insects: 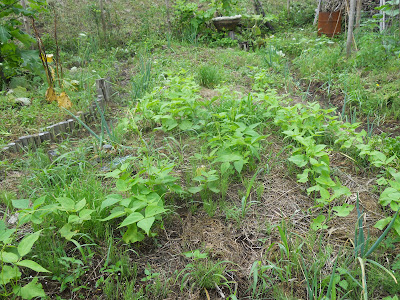 The 'Three Sisters' of indigenous American fame – corn, beans and squash – also enjoyed the long-established benefits of one another's company: 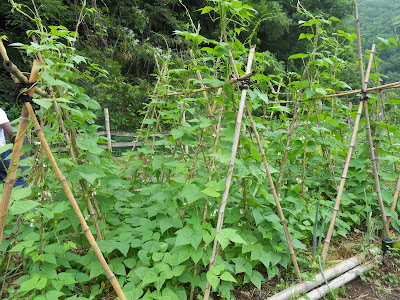 Larger crops lent their shadows to smaller ones which preferred the shade, making the most of all available space; and nearby stood a 'bag house' built of plastic bags reinforced with clay and plaster, its cool interior used for storage. 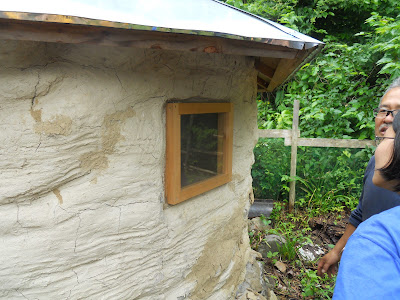 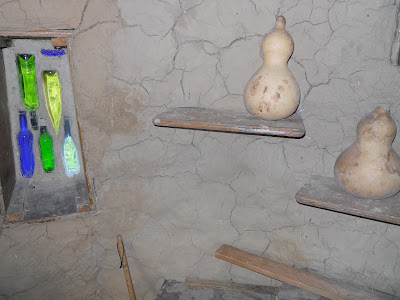 This was also where we met our hefty friend: 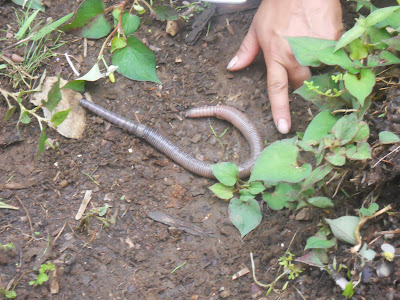 ...and came across the 'chicken tractor', surely the bold and coruscating future of the sector, the consummation of all agricultural dreams come true. 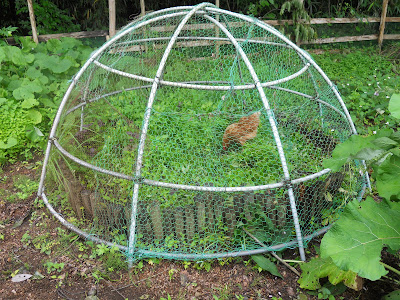 Within two days, the chicken will clear the allocated area of crop-devouring insects without the need for one particle of manufactured chemicals. In so doing it also leaves behind its fertilizing donations out through its other end, promoting the plants' self-cultivation. This is surely a thing to induce speechlessness.
Not quite as breathtaking as the aforementioned marvel but still quite significant, Fujino is developing its own local currency scheme. This currency, yorozu (よろず ), places value on community interactions, rather than material consumption. Your stock of it increases when you contribute, and decreases when you receive the contributions of others, in quantities mutually agreed. And because the point is to build community connections, going into the "negative" is an excellent thing: for it impels you to make further contributions to the life of the community, make more interactions, build more connections, and expand the energy and reach of Transition thereby. 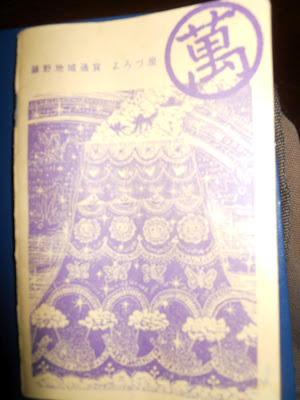 True to that spirit of creative forwards motion on one's own initiative, the house and grounds of our resident colleague contained its own array of projects and experiments. 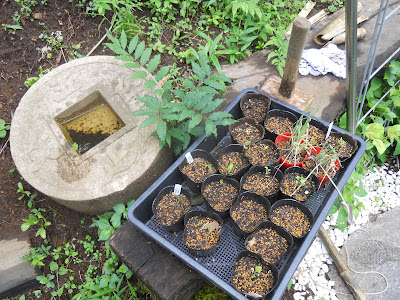 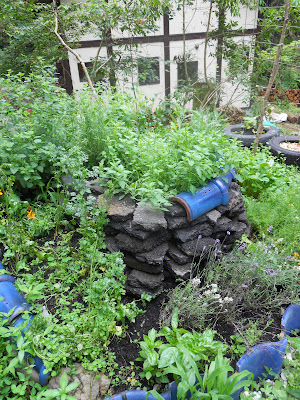 How many different herbs can you identify in here? 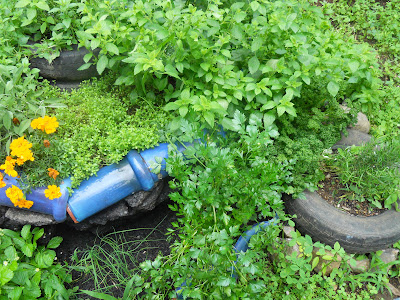 Here is a rocket stove of high-efficiency combustion and minimal smoke once properly running: 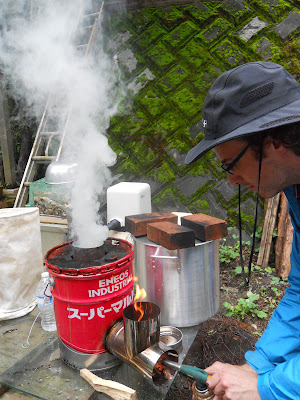 And in the workshop of a nearby creative mind, kaleidoscopic masterpieces worthy of the awe of the mountains themselves. 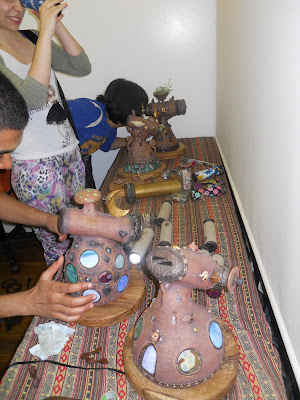 And of course, something fuzzy. This was picture-perfect wild boar and Totoro country, after all, the quintessential Ghibli Hills; though sadly such things were not glimpsed on this occasion. 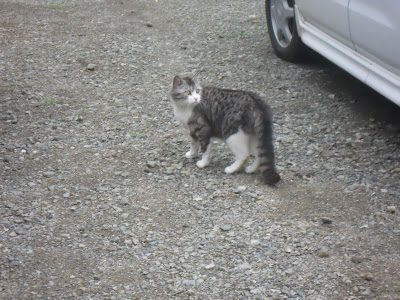 Inevitably the Transition initiative has its limits. Yes, it is not a one-shot solution to all the unsustainable ills of humankind; and much can be said about resources required for a person to become part of this drive in the first place, or the methods by which it seeks to bring out creativities, resourcefulnesses, and concerns for others that should be second-nature to us in the first place. Nor can these localized efforts substitute for the huge political, economic and spiritual changes necessary at the national and global scale to surmount the sustainability crisis.
Nonetheless, I posit this: that it represents a bold, courageous and absolutely welcome attempt to contribute, pragmatically and provocatively, to the explorations our species must undertake as to how to endure the emergency of our kind. The true power of all of these things – the permaculture, the energy and forestry and food initiatives, the local currency and so on – is not merely agricultural, ecological, or economic. It is political, at the most elemental of levels: a statement of who we are as creatures who look at the world around us, decide we are unsatisfied with what we have made of it, pick up our tools, and chisel upon it our dreams of making it better. Above all, a rejection of the Leviathan: to assert that it is the way of humans that one another's concerns will also be our own – the crux of the only path to restoring humanity's sustainable place in the world.
Many thanks to Professor Osamu Saito, and my good colleague Byron Nagy, for organizing this excursion. 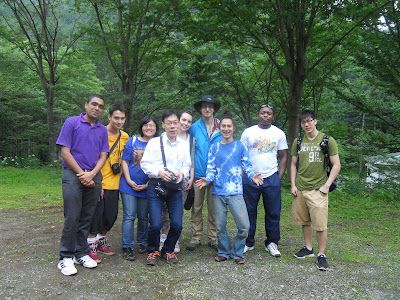