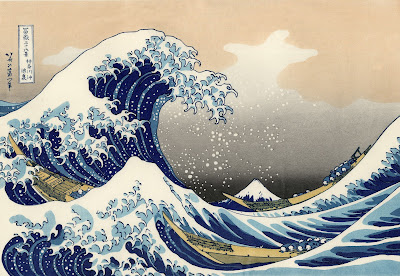 One year ago, one of the most violent earthquakes ever recorded brought devastation to Japan's Tōhoku region. In the Triple Disaster of earthquake, tsunami and meltdown at the Fukushima Daiichi nuclear power facility, over 15,000 people were killed, thousands more were left missing, and vast sections of infrastructure along the coastal prefectures were reduced to wreckage, their debris-strewn landscapes still greeting those who travel to the region today.
There appear two starkly contrasting sides to how Japan has dealt with the challenges encumbering it since March 2011. Most visibly we see an endurance and stoicism lauded worldwide: a brave population pulling together and doing what has to be done, determined and disciplined, inspiring respect in foreigners who tend then to question if their own countries could handle a similar tragedy with anything approaching Japanese dignity.
On the other side the scene is far more sordid. Spectacular mismanagement and ineffectiveness from the likes of TEPCO and the central government, and an associated collapse in trust; persisting confusion over radiation safety in the Fukushima plant's exclusion zones; miserable tribulations for residents not sure if their food is safe, if their kids should play outside at school, or whether to evacuate altogether; and beneath it all, the undercurrent of powerful decisions made on the basis of economic greed or political expediency – such as does this country disservice as much as it does to any other.
This was less a natural disaster and more a human one. It is not for the Earth to lie still at our request, but for us to accommodate the movements it has seen fit to undertake since long before we existed – which of course is quite feasible for us to do. But this requires responsibility on the part of national and prefectural governments and those who run the economic infrastructure: and as such, the crisis' furthest reaching implications are deeply socio-political.
On those terms, the shockwaves spread far wider than those of the earthquake itself, perhaps most tellingly with the collapse of confidence in nuclear energy as far away as Europe. It was not just a question of how to respond to the calamity; it was, and is, a question of who we are and how we organize our societies.
Let's think about the significance of what we might be dealing with here. There are worsening trends on the list of countries experiencing a collapse of trust in political leadership – especially those that consider themselves 'democratic' – and Japan today finds itself ever closer to the wrong end of that list. This is not necessarily good news. An erosion of faith in the political classes, left unchecked, can all too easily slide into an erosion of faith in a society's very model of politics.
Sometimes this is necessary. Indeed, with all arrangements of power that encourage selfishness and greed, it must happen sooner or later. But too often – as Egypt and Libya might tell us – a constructive replacement eludes us.


Now we need not remind ourselves that 'democracy' – for whatever its goods and ills – is scarcely a few decades old in Japan. Who remembers what it replaced?
Despite the catalogue of political grotesquenesses the Japanese have had to contend with under this model – corrupt party politicians, environmental ruination, the mass alienation of youth, and so on – they have nonetheless, thus far, appeared to maintain their confidence in the actual political system. So remarkable were its professed successes at first that 'democracy' – something Japan found its way to more out of national trauma than a coherent journey of self-discovery – has become very much taken for granted here, in principle if not always in practical integrity.


But how long can it last?


Perhaps the question sounds nonsensical. Surely it is preposterous to think that March 2011 might seriously project Japan towards another transformation, or revolution, in an 1868 or 1945 sense? Indeed, indeed – but that should not excuse us from making some serious reflections. The Triple Disaster in Tōhoku might be far from such a catalyst, but other events on the radar might warrant a lot more concern in this regard.
The last time there was an earthquake of similar magnitude in the Tokyo area, this happened: 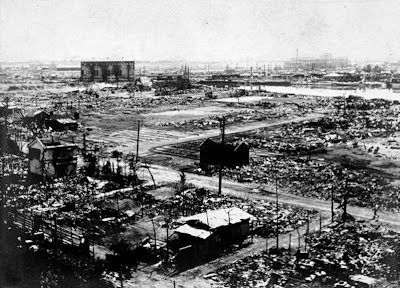 That was 1923, and one cannot go far in Tokyo these days without catching the murmurs that, statistically, another big earthquake in the region of the capital is "due". More disquieting are the suggestions that recent seismic disturbances in the Mount Fuji area might be connected to the mountain itself – which is, after all, an active volcano, overlooking 13 million people crowded into the hugest urban centre in the world.
Of course there is no reliable process to accurately predict such things (although that hasn't stopped the Italians from prosecuting itsseismologists for their unpardonable crime, so they would have it, offailing to do so). But one must always be prepared, and despite how far Tokyo has come since the 1920s with its 72-hour survival drills, forecasts and warning systems, regulations for earthquake-proof architecture, and so forth, what one hears about Tokyo's readiness for another big earthquake is not reassuring.
And this in the one country that's probably better prepared than any other for disasters of this magnitude. No modernity, no tools, no technology, alone sufficies: accommodating the rage of the Earth is before anything else a question of attitude of the humility to refrain from hubris, the rejection of complacency, and the responsibility, in all sectors of society, to look through long-term perspectives, identify and respond to risks, and concern ourselves with other people's prospects.
This, in turn, connotes healthy social relationships between citizens and their political leaders, as well as with one another. Bonds of trust and genuine concern, that is, that can withstand the most savage of shocks and guide all society through the challenges of recovery.
I am not confident that this is how most Japanese people I have met would describe their country's political situation. And while one can admire their patience, it would be a reckless assumption, and unreasonable expectation, to think this patience might not have its limits.
In Hokusai's The Great Wave Off Kanagawa, above, we see an image of nature's ferocity from the 1830s that has since been interpreted as a metaphor for corresponding social and political storms which were soon to sweep across Japan. Back then, it was the aggressive intrusion of foreign barbarians, whose very presence shook the country to its roots and forced it to reflect on and re-imagine its identity in the world. But these days, in the age of the global sustainability crisis, and March 2011's demonstration that not even the most modern of our societies can take our relationship with the elements for granted, the link between the turbulences of nature and society might be much more literal.


The threat of a destructive Tokyo earthquake comes at a time when Japan might well worry at its surroundings, with the volatile uncertainties of the Kim Dynasty succession in North Korea, and a socially unstable China building up its navy for confrontational maritime posturing. Generations shift, and memories fade of just how scary some alternatives to Japan's current political order can be; even as the country still has trouble admitting that subjecting and slaughtering its way across Asia was wrong, and one doesn't have to go far to see right-wing nationalists asserting themselves down the streets of Tokyo with their flags and speaker-mounted vans. At times like these, to gaze on the shops and restaurants and architecture, and wonder how such things reflect Japan's relationship with foreign ideas and influences – a spinning carousel of one moment admiration, the next contempt, and never may one guess in advance – and to consider its idiosyncratic big debates, such as how its army can or cannot be not really an army, or how the disaffected youth can care for mounting legions of elderly, is to feel that this is a country whose long journey is not yet secure in direction; which has yet to feel sure what kind of place it genuinely wants to be.


An atmosphere of temporariness, indeed; of scaffolding, of making do with something inadequate until a better way can be found – but because that search has not always gone well, they do it with patience, tolerating perhaps a bit more inadequacy than most others would.


This patience has been exhausted plenty of times in Japanese history. 'Inadequate', when it becomes too permanent, slips complacently into 'inexcusible', at which point alternatives, impossible a few minutes earlier, become inevitable. Dialectics and contradictions, opening and closing, past tradition and future vision: Japan covers the ground from extreme to extreme with about the same statisitcal frequency, indeed, as its catastrophic earthquakes.


At some point, Tokyo will have to contend with one. At another point, that may or may not be close to the first, Japan's politics will transition to another new shape. The responsibility to deal properly with the first challenge, is not so separate from that of laying the foundations for the second to produce something better, rather than worse, than what is here now.
Posted by Chaobang at 09:53